Global Governance
Expert Opinions
Carbon Neutrality: The Frankenstein Experiments
Vitaly Yermakov
© 2021 Martin Meissner/AP
European politicians and lobbyists, in their pursuit to invent new tools to achieve carbon neutrality “during the lifetime of this generation”, increasingly resemble Victor Frankenstein, who created the Monster from dead matter, but lost control over it.

The main challenge for European green policy today is the understanding that the ambitious goal of carbon neutrality by 2050 cannot be achieved through economic incentives (the carrot) and requires active government intervention (the stick). The problem of containing the rise of the Earth’s temperature is global in nature and cannot be solved through the unilateral actions by the EU. But the eurobureaucrats intend to use the stick primarily against the “irresponsible” third countries reluctant to accept the dogmas of the European “code of the builders of bright carbon-free future”, which results in a unipolar approach to climate regulation.

One of the elements of this confrontation, where the EU’s policy of double standards had manifested itself, was the discussion of the so-called Carbon Border Adjustment Mechanism (CBAM) in the European Parliament on March 10, 2021.

The EU is a major importer of products with high carbon footprint such as cement, steel, aluminium, glass, chemicals, fertilizers, and refined petroleum products. “Imported” greenhouse gas emissions from the consumption of these products significantly exceed emissions from domestic production of the same products in the EU. According to CBAM’s proponents, the imposition of a special tariff on importers (timidly cast as an “adjustment mechanism”) should create incentives for the producers to reduce the carbon footprint of their products, and should also prevent the migration of European manufacturers of goods with a high carbon footprint (so-called carbon leakage) to the jurisdictions that do not use carbon pricing or emission trading schemes. At the same time, in terms of its economic essence and administration mechanism, CBAM is no different from the classic protectionist trade tariff. The European Commission is trying to shield this tariff from the rules of the World Trade Organisation (WTO) and possible arbitration; it insists that the CBAM’s main purpose is concern for the climate. However, as the discussion in the European Parliament has shown, the climate agenda is not at all the main motive, it is only being used to cover up and protect the interests of specific political and industrial groups.

It is worth noting that the success of the EU in the fight against CO2 emissions was extremely modest until the mid-2000s. Russia, which experienced an acute economic crisis and fundamental shifts in its economic structure after the collapse of the USSR (away from heavy industry and towards service sector), sharply reduced emissions in the 1990s, way ahead of the European Union. It has nearly reached its targets under the global climate agreements long before the EU started to pose as a saviour of humanity from the climate catastrophe. (See Fig. 1) 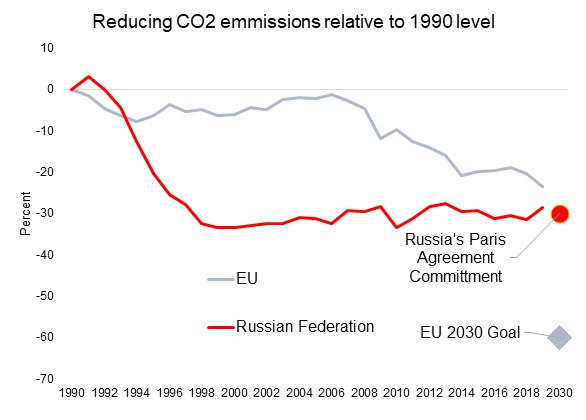 Under the auspices of the current EU Emissions Trading System (ETS) many European industrial companies are able to receive free emission permits (the so-called CO2 mandates) provided their international competitiveness could be hurt if they had to pay for emissions in full. Besides, the European CO2 prices had been at extremely low levels for a long time, especially from 2012 to 2018, in a clear indication of a policy failure with regards to carbon regulation on the continent. Recently, the price of CO2 has increased to the level of circa €30/tonne, which is still insufficient to meet EU decarbonization targets (see Fig. 2)

Fig. 2 CO2 prices in the EU (Euros per tonne of emissions). 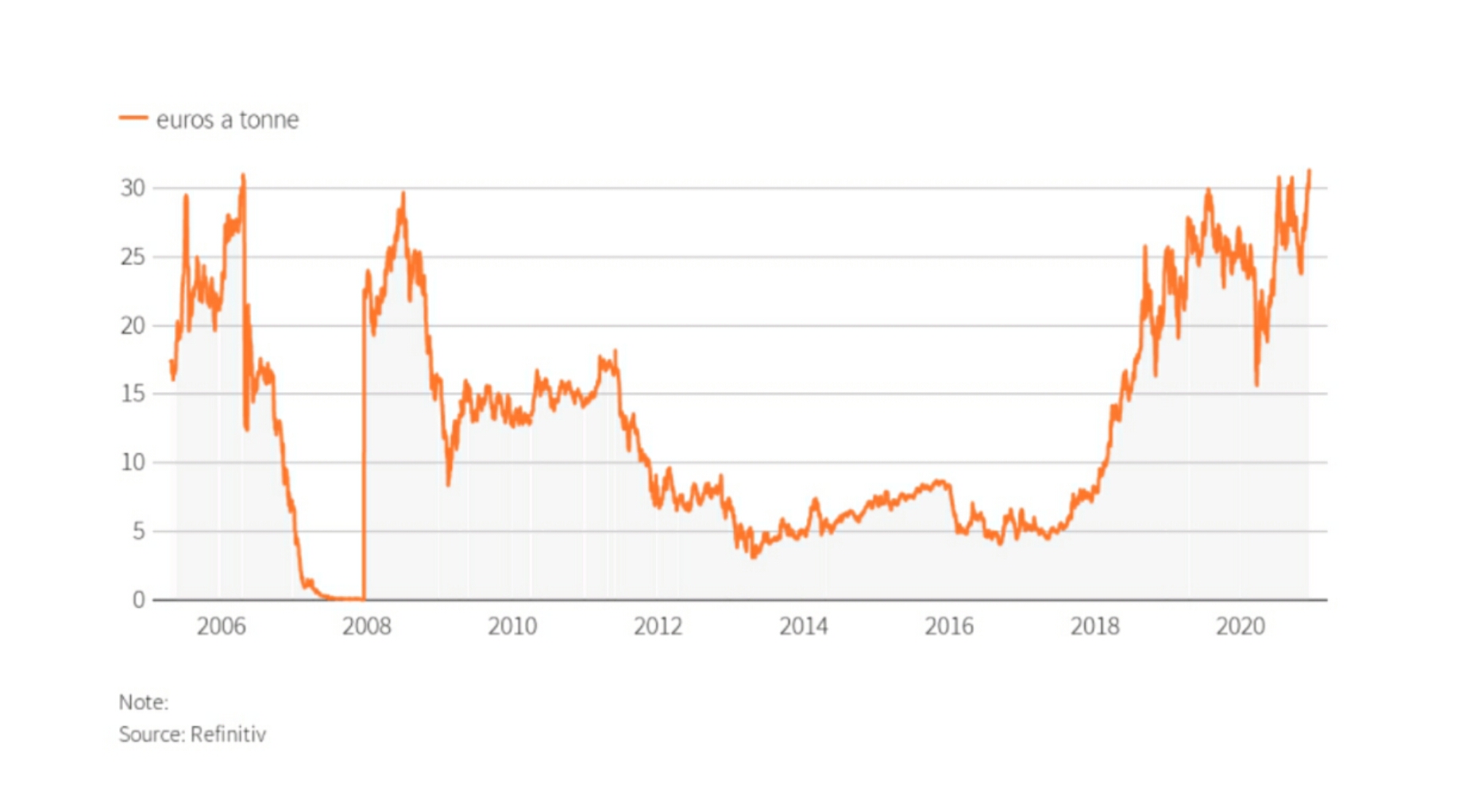 Success in reducing CO2 emissions in the EU, by 22% between 2006 and 2019, could be attributed to the allocation of huge subsidies for renewable energy sources on the continent and the closure of many “dirty” industries in Europe due to their lack of competitiveness, rather than to the success of ETS policies. Europe’s share in global CO2 emissions in 2019 remained at almost 10%, which is more than double Russia’s share (4.5%). At the same time, as similar industries in China have become the new “workshop of the world” amid globalization, China’s CO2 emissions during 2006-2019 increased by 47%, and China’s share in global CO2 emissions in 2019 reached 29%. (BP Statistical Review of World Energy, 2020)

Currently, the EU, in an effort to meet its climate targets for 2030, has begun an overhaul of the emissions trading system. The only way to make it work is to stop the practice of giving free emission permits to domestic producers (which is similar to corrupt practices of selling indulgencies) and to sharply raise CO2 prices to €90-100 per tonne, i.e. almost three times their current levels.

The problem is that, in the absence of similarly high CO2 prices in other countries, European producers would become uncompetitive internationally. This is where the EU bureaucrats intend to use CBAM as a “magic wand-type” solution that would level the playing field and correct the terms of trade by charging importers with a tariff. Thus, the EU is trying to export its legislation, impose a tax on suppliers over a wide range of products from abroad and make third countries pay for the Europeans’ inability to meet their climate commitments.
Political Risks in Global Energy: From ‘Resource Nationalism’ to ‘Molecules of Freedom’ and Climate Weapons
Konstantin Simonov, Alexei Grivach
In an ideal world, energy would be an exclusively business matter. However, it acquired such a big role in today’s economy that achieving this ideal seems like a utopia. Energy supply in general and oil and gas trade in particular have always been and will always be inseparable from politics.
20200628_Political Risks
pdf 0.46 MB


The European Parliament considered CBAM’s merits and adopted a draft resolution that outlined the general guidelines for the European Commission (EC) in developing the CBAM legislation. The EC is expected to produce these in the second quarter of 2021, i.e. no later than June.

The resolution is subject to a vote in the European Parliament in the near future and, in case of final approval, it will become the starting point for the development of EC regulatory documents. Until these documents are published, the specific form of the CBAM and the rates of the tariff are unknown. It should be noted that during the discussion in the subcommittees, the most heated debates took place in the subcommittee on industry, research and energy, where 37 people voted “for” the proposed measures, 32 people “against”, and 4 abstained.

The main concerns of the deputies have been whether the proposed mechanisms are compliant with the principles of international agreements on trade and the WTO norms, and whether the EU trading partners might introduce retaliatory measures to compensate for their damage. This is why the resolution charges the EC with a necessity to use legal formulations in designing the cross-border carbon regulation that would not create conflicts with the EU trade agreements under the GATT and the WTO.

Another sensitive issue was the discussion of paragraph 28 of the resolution on the mandatory elimination of the widespread EU practice of “selling indulgences” to its own producers who do not pay for emissions within the framework of mandates or quotas. If this does not happen, the CBAM will not have a chance to comply with the WTO principles, not only in terms of the spirit of the proposed measures, but also in terms of their provisions. That is of greatest concern to the lobbyists in the EU, who want to extend the current favoured treatment for their industries for as long as possible.

Finally, the “high hopes” of the European bureaucrats regarding the fiscal revenues from CBAM may come to fruition only partially, but at the same time lead to serious problems for European consumers. Economic models describing the effects of trade tariffs, both in the framework of general and partial equilibrium, indicate that the price of goods subject to the tariff increases, and the distribution of benefits/losses between the importer, consumer and the state will depend on the elasticities of supply and demand for specific goods. Now, instead of engaging in such an analysis, many bureaucrats in Europe are beginning to calculate the proceeds from the introduction of CBAM, forgetting that the consequences could be extremely negative for the Europeans themselves. Importers will undoubtedly try to pass on the cost of the tariff to consumers through higher prices for their products. Many of the goods subject to CBAM represent critical inputs for the most important sectors of the European economy, such as its own processing industry, construction, agriculture, and transport. Economic problems in these sectors can quickly turn into political problems.

The French government already managed to shoot itself in the foot when it tried to raise the price of petroleum products and faced massive protests from the “yellow vests”. Reckless policies based on ideological dogmas inevitably lead to political problems. Frankenstein’s monster already functions beyond his creator’s ability to control it. Hopefully, it won't destroy its master until 2050.
Climate Policy in a Global Risk Society
Maria Apanovich, Oleg Barabanov, Pavel Cheremisin, Elena Maslova, Roman Reinhardt, Ekaterina Savorskaya
The only positive outcome of the coronavirus pandemic was the rapid self-cleansing of the environment. Emissions from factories ceased as they were shut down and there was lighter traffi c, resulting in better air quality. This has been corroborated by satellite images and meteorological monitoring data in many countries. Then, river water got cleaner.
﻿
Report_Climate_Policy in a Global Risk Society
pdf 1.06 MB
Views expressed are of individual Members and Contributors, rather than the Club's, unless explicitly stated otherwise.
Tags
environment
European Union
Print
Send by e-mail
Send by e-mail
Add to blog
Add to blog

Turkey-Russia Relations Under Biden Administration
Dividends of World Peace in 2050: A New Environment for Humanity

Space Law. Version 2.0?
The Cultural Revolution of the West and World Politics

Nobody’s Balkan Land?
Passing the Test of the Covid Pandemic