The developments in France have painted this autumn in a special colour. The actions of Yellow Vests, which began from dissatisfaction with environmental changes, so popular in Europe, became a source of internal political demands and added new nuances to the development of the Fifth Republic.

Environment became one of the main conceptual components of Emmanuel Macron’s policy from the very beginning of his presidency. For him, it was also adherence to European values, and the generally accepted criteria for the development of modern society — through new technologies and cleaner production. However, the calls of the president and the government to “change together” and “mobilize to act” while implementing the “energy transition”, were not heard by everyone.

"Optimization" of Emmanuel Macron: Good Statements and Unjustified Expectations
Tatiana Romanova
The first hundred days of Macron did not bring to any particular results, moreover, they were marked by unpopular measures, especially inside France.
Expert Opinions
The fuel prices increase and the planned increase of the tax on energy products — measures that were part of the French president’s environmental policy — meant the beginning of the Yellow Vests protest.

Discontent quickly grew from environmental to social one. Residents of small towns and rural areas, who constituted the majority of the protesters, did not understand the abolition of the wealth tax, which, according to the government, was supposed to “increase investments in the economy.” The recent scandals associated with rude statements by the president and the behaviour of political elites gave a special colour to the events. Is not the first time in the history of France that Macron’s nickname “Republican Monarch” is addressed to the president. Thus, the traditional allergy of French society to social inequality was reinforced by the rejection of the current government’s arrogance.

However, is the Yellow Vests protest movement so traditional even for France, a country where each trade union has its own strike schedule? Not at all. First, this movement was initiated through the social media. Second, it does not belong to any trade union or political party. Third, the protests were held without coordination and took place not on the outskirts (as it was before), but on the central streets of the cities. Fourth, despite the fact that social and economic slogans have been preserved, the protest movements of this autumn blurred the ethnic factor and the migration issue.

Political Crisis in France: Locked by Elites
Jacques Sapir
Today we are at the same time in an obvious social crisis, in a real political crisis, but we are also confronted with a representativity crisis of the elites which governed over us for ages. A political and economic solution is needed. But such a solution will only come if we break with the framework in which France has locked itself (and has been locked by its elites) for about twenty years.
Expert Opinions
Before attempting to comprehend events, I would like to recall the symbolic history of the Yellow Vests emergence of in the French media space. In 2008, before the adoption of the July 30 resolution, which introduced the yellow vest as an attribute of cyclists and drivers, the French Inter-Ministerial Committee on Railway Safety published an interesting social advertisement. The poster depicts the always ideally dressed fashion designer Karl Lagerfeld, known for his environmental views, in a yellow vest, with the inscription: “It is yellow, ugly, does not fit with anything, but it can save your life.” 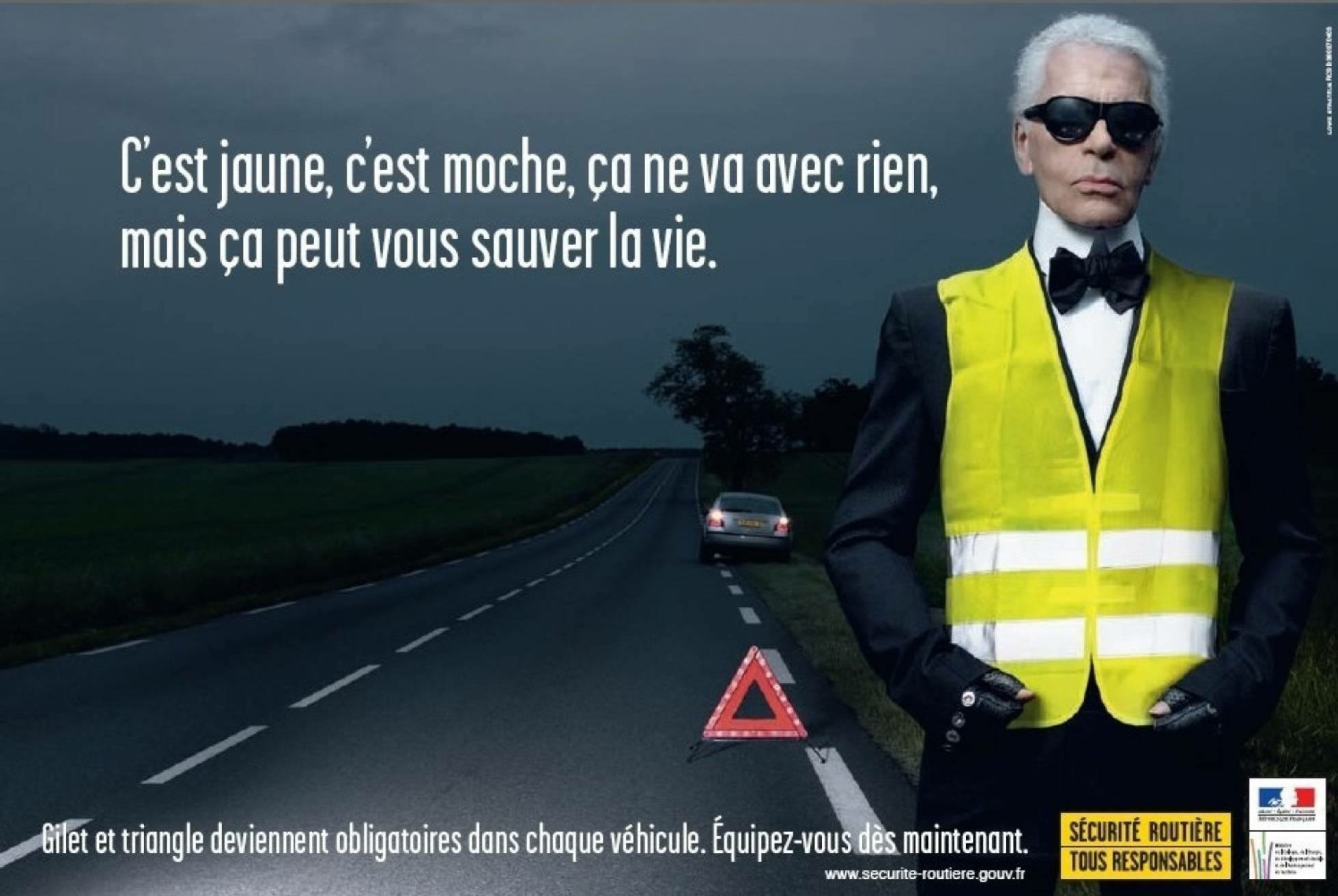 It may be too early to make assessments of what happened in France in November-December, but can the Yellow Vests movement be considered as a saving one? Of course, these events will affect the subsequent reforms in the country. Above all, social issues (pensions, unemployment) and state institutions will be affected. The government has already made some concessions. They will also influence the political course of President Macron and Prime Minister Philippe. These events will determine the further political rating of the current French president, both domestically and externally.

Above all, this “social anger” reflects the social conditions in which the country lives (and this is not only France): the new system of communications building and the multiplicity of information flows, the new logic of social performances and self-expression — all this leads to openness and availability, but requires a review of the public information space functioning. The self-expression flows, diluted by crises in the economy, ideology, religion, education, the psychological development of society, faced with a multitude of global changes and risks (including environment, migration flows, fierce international competition, terrorism), are complemented by fear and hate. This forms inferiority and distortion of any conditions for the development of society. Therefore, these days French society talks a lot about the “illusion of direct democracy,” or about “caricature democracy.”

The symbolism of the colours of the French Republic’s flag is often associated with the motto that appeared after the revolution: blue – freedom, white – equality, red – fraternity. It is difficult to predict whether the Yellow Vests movement will affect the meaning of French symbols, but this movement definitely characterizes the current state of French society and will also be included in the series of historical events and anniversaries, along with the 50th anniversary of the May 1968 events (important date for the internal political achievements of the Fifth Republic) and the 100th anniversary of the end of the First World War (a symbolic event for the development of European integration), because the Yellow Vests actions affected the internal foundations of France and its European policy.

Views expressed are of individual Members and Contributors, rather than the Club's, unless explicitly stated otherwise.
Tags
France
Emmanuel Macron
Yellow Vests
Print
Send by e-mail
Send by e-mail
Add to blog
Add to blog