Global Corporations and Economy
Expert Opinions
Long Trends and Disruption: The Anatomy of the ‘Post World’ of the Covid-19 Crisis
Jacques Sapir
© 2020 Ahn Young-joon/AP
What will be the economic architecture of the world after the Covid-19 crisis? This question involves understanding the major trends at work for twenty years now.

The world that will emerge from this crisis will be marked by these major trends, which, for some, will be reinforced by this crisis. However, this crisis has created too specific disruptions, in particular in the field of transport and energy. It has also provoked an awareness of the centrality of sovereignty, and in particular of economic sovereignty. Finally, the economic and monetary policies that have been put in place to combat the economic effects of the epidemic and of containment will have long-term consequences on international financial balances.

An acceleration of the change of the world?

Since 2000, we have witnessed the rise of an “Asian bloc” to the detriment of what we might call the “Western bloc”, that is to say the United States, the European Union and the United States. Japan. This Asian bloc is heterogeneous, as is the Western bloc. In each of these bloc politics is the main factor of homogeneity. But, these blocs also correspond to an economic reality: that of the countries of old industrialization against the countries, which it is better to call new industrialization than emerging ones. 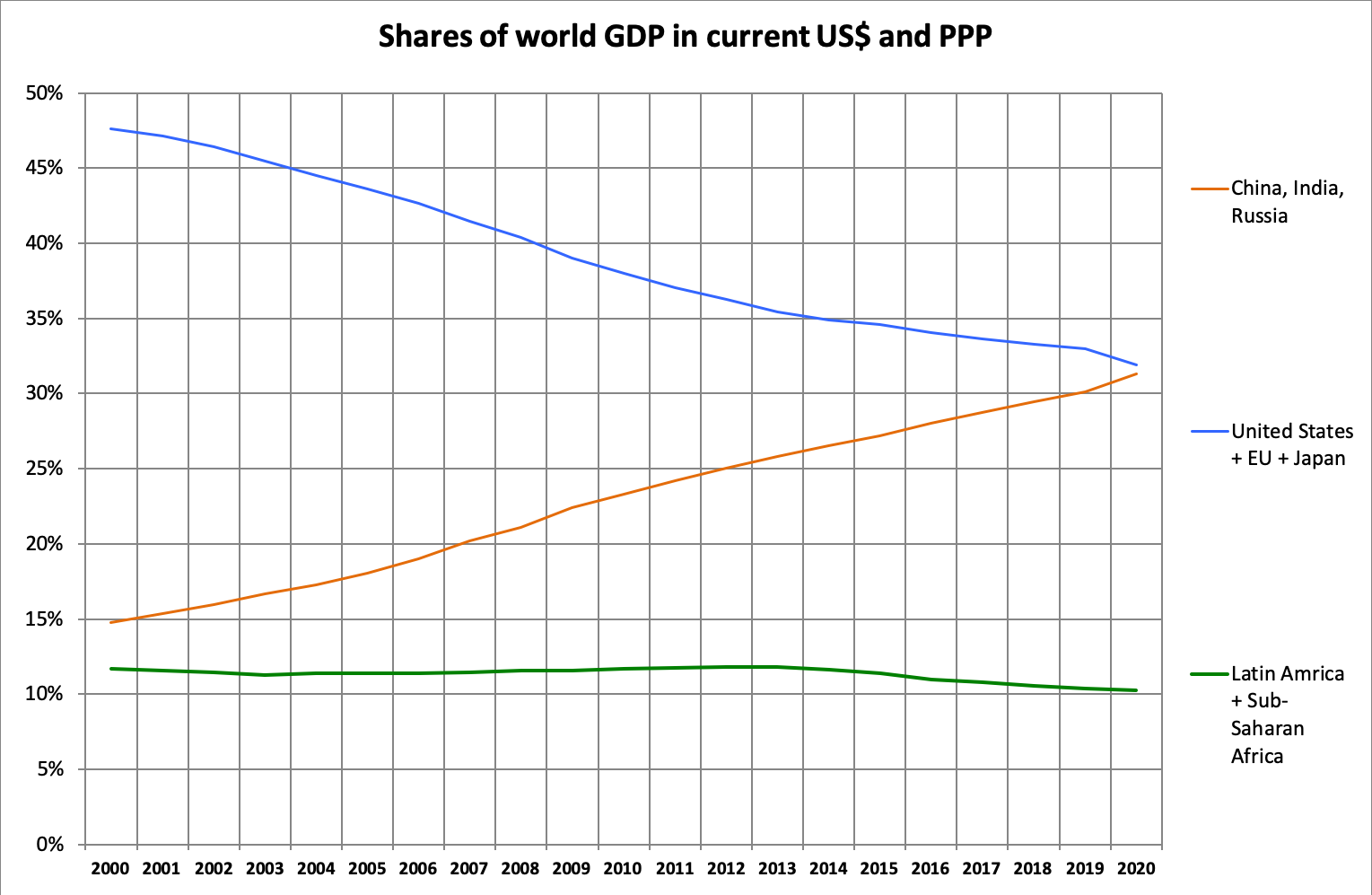 During his long tenure as Prime Minister of Japan, Abe managed to formulate his own foreign policy strategy and take measures to implement it. In addition, the Abe administration was characterised by an unprecedented concentration of power in the hands of the prime minister, his advisers and the administration. The high stability of power and great foreign policy activity made Abe one of the most recognisable and respected politicians in the international arena.

In 2000, the China-India-Russia combined represented only 15% of world GDP, while the United States, the European Union and Japan combined weighed more than 47%, or three times as much. In 2020, the two blocks are tied at around 31.5%. If we take into account the immediate effects of the Covid-19 crisis, this movement is even expected to grow. The IMF has made forecasts which indicate that China and emerging countries should recover much faster from the shock of this crisis than the so-called "advanced" countries, ie countries of former industrialization. The world should see the shift to Asia amplify in the coming years. 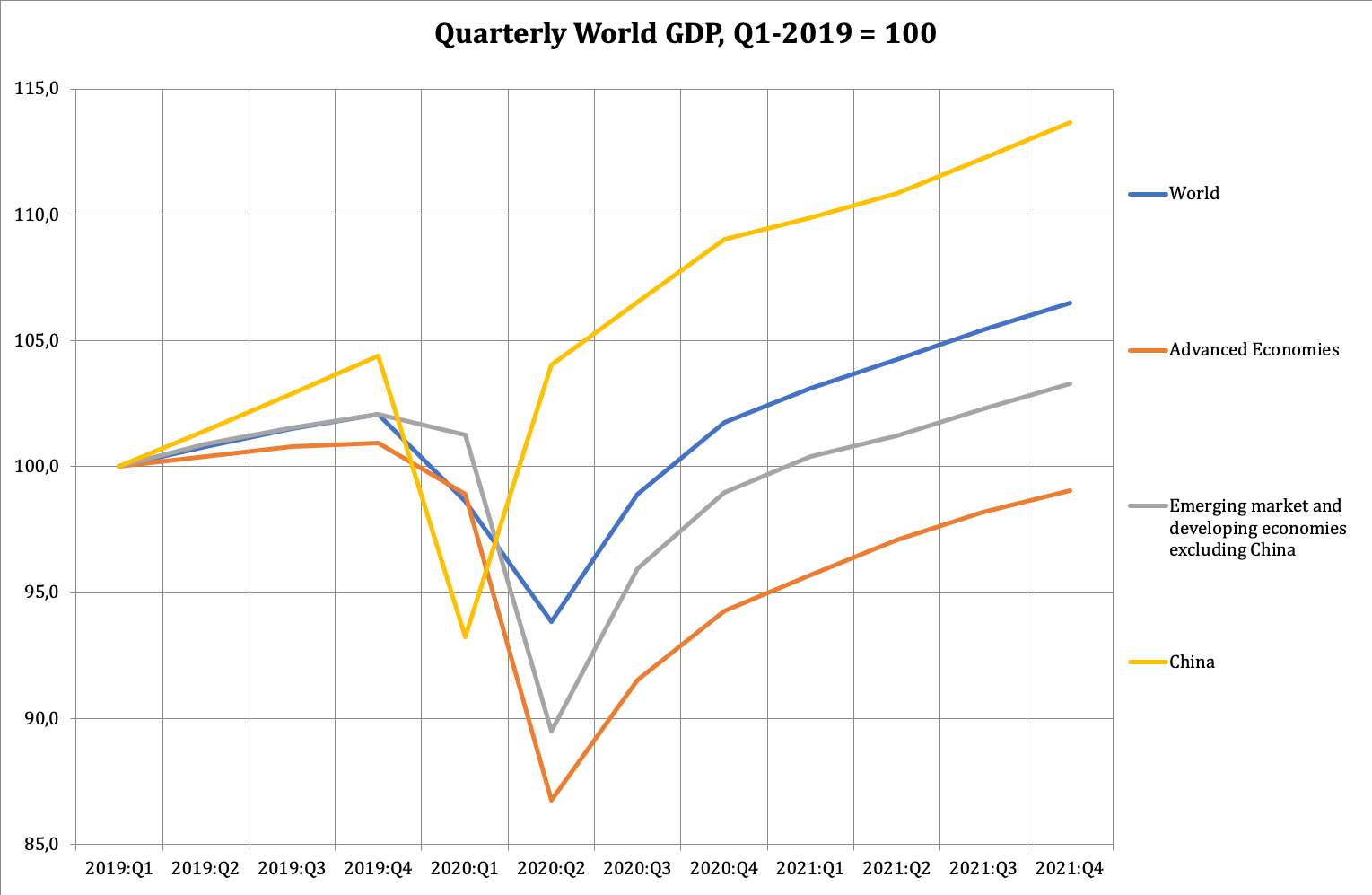 The death of oil has been greatly exaggerated… (bcc,  Mark Twain)

The Covid-19 pandemic has had a profound influence on the energy market and on oil production. The persistence of the pandemic means that air transport, among other things, will not return to its 2019 level before, no doubt, 2024. This implies a weak demand for kerosene as estimated by the International Energy Agency Forecasts of global oil demand and post-crisis economic growth are determined by different assumptions. In the optimistic scenario, there is a rapid economic recovery in a more or less flattened "V" shape in the first half of 2021, but the demand for oil does not fully return to the pre-pandemic trend. In the more pessimistic scenario, oil demand will not reach 2019 levels until 2023, and its growth will remain well below the pre-pandemic trend. The current evolution of the pandemic suggests that we are closer to this pessimistic scenario. These two scenarios also assume that zero-emission vehicles will represent 60% of new vehicle sales by 2040, because investments are high in these technologies. Therefore, they both forecast a slowdown in demand for oil to peak in the mid-2030s at around 105-108 Mb/d. What will be the consequence?

In the medium term, OPEC will have to manage the probable return of part of the 5.7 Mb / d of unused production in OPEC countries (Venezuela, Iran and Libya) and non-OPEC countries (Syria and Yemen). ). OPEC will also have to deal with the resumption of US hydrocarbon production (particularly shale oil), a recovery that may be slow due to falling investment, as demand and the price of oil rise. US production of hydrocarbons has fallen by more than 2 billion barrels / days, due to the closure of existing wells, reduced storage capacity and reduced demand.

The impact of Covid-19 on oil demand will therefore be profound, particularly in the event of a deep and long recession associated with a protracted pandemic. Without aggressive intervention by OPEC, the average crude oil price could thus remain below $ 50 / barrel until mid-2022. During the second half of this decade, supply and demand are expected to move closely towards equilibrium as non-OPEC production, especially from Russia, begins to decline and US hydrocarbon production reaches a low. tray. The price of oil is expected to rise to around $ 80-90 / barrel (optimistic scenario) or $ 70-80 / barrel (pessimistic scenario), even without OPEC intervention.

As we can see, however, despite all voluntarist proclamations one can hear here and there, oil will remain a major source of energy for at least the next thirty years.

The return of economic sovereignty

A more direct change brought about by the Covid-19 pandemic is the realization of the importance of economic sovereignty. Of course, a number of countries, China, Russia, but also the United States and India, were acutely aware of the importance of this sovereignty. The European Union, for its part, had adopted a very negligent attitude on this subject. The strong disruption of international trade caused by the pandemic caused a real shock on this point. Of course, there is no question of returning to more or less self-sufficient economies. But, the economic, social, and even strategic damage caused by free trade policies are globally more taken into account today.

This will accelerate the return of nations and the crisis of multilateralism that we could already observe. The economy is once again becoming a breeding ground for strategy. Through the policy of economic sanctions, which the United States has used and abused since well before the election of Donald Trump, we are witnessing an acceleration of the fragmentation of the world economic space. American pressure on Huawei, or on the Chinese social network "TikTok" is an example. De-globalization had passed from the stage of possibility to that of concrete fact; with the effects of the pandemic it will pass from that of fact to that of major fact.

This return to economic sovereignty induces the great revenge of politics over "technology", the triumph of decisions over the automaticity of standards. However, " technology" is embodied today mainly in economics and finance. The pandemic heralds the return of sovereignty, and being sovereign is above all having the ability to decide. The countries will then be referred to logic of bilateral relations, or even to regional logic. It will then be necessary to seek allies.

The questioning of the "global" character of the companies linked to the INTERNET, the desire of several countries to build their "digital sovereignty" is an example of the struggle that is looming for economic sovereignty. This resurgence of politics does not mean that, in our societies, certain spaces are not governed by the technical order, and that there are spaces dominated by technical legitimacy. But, these dimensions will now become second in relation to the political, which will recover its rights.
The economic and the financial will once again become instruments at the service of politics. What the political will do with it remains to be determined.
A Debt apotheosis or an end of debt?

A final point remains the explosion of both public and private debts due to the pandemic. In most countries, the Covid-19 crisis has resulted in the collapse of various barriers to the expansion of public debt. 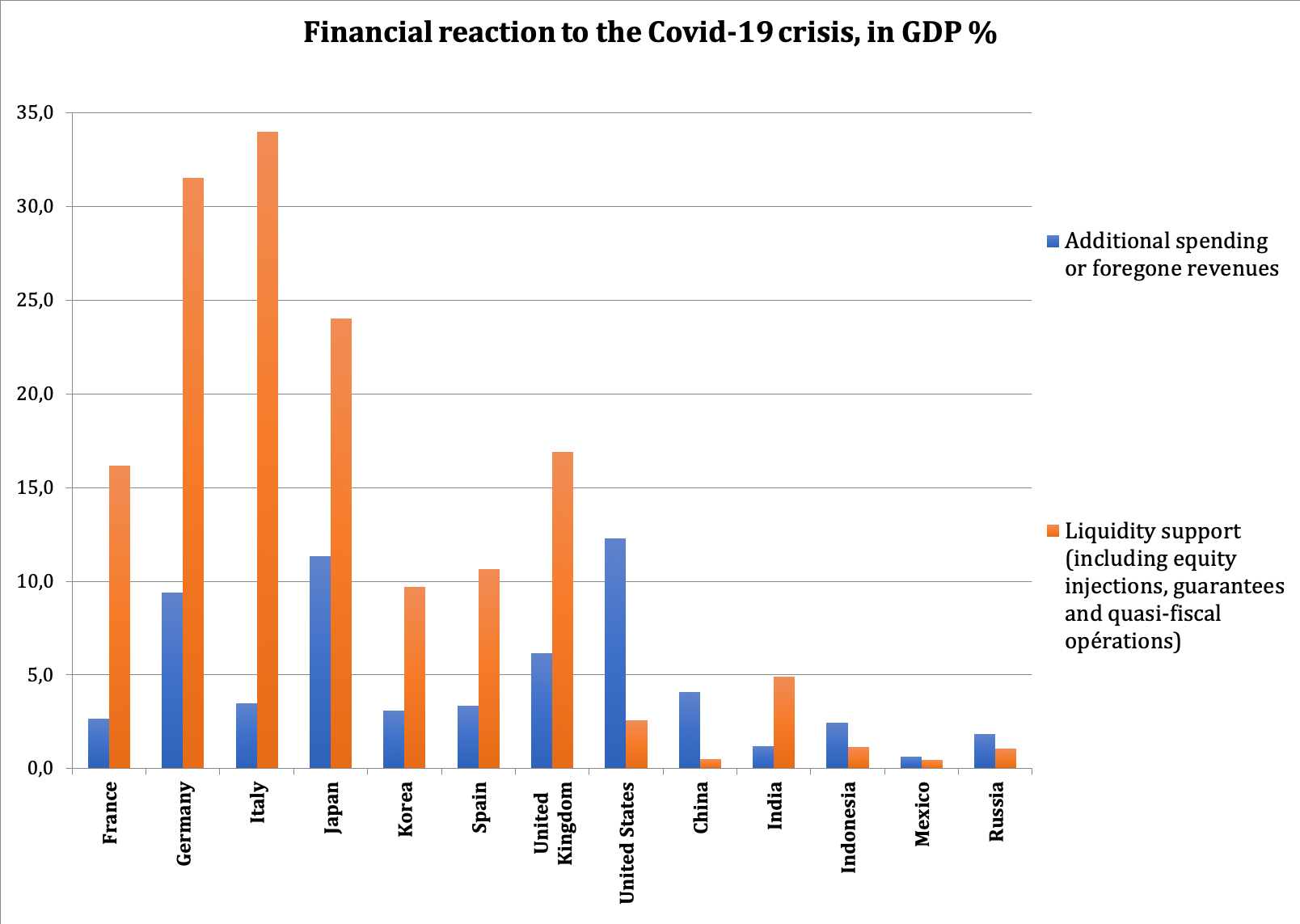 The latter has therefore increased to finance the fall in tax revenues during the confinement period but also the considerable additional public expenditure generated by the crisis. In addition, there are liquidity facilities, consisting of guaranteed loans, equity investments and the like. The result of all this is that the indebtedness of states (especially in the Western bloc) and that of companies will increase considerably by 2021. This debt will not be covered by an increase in taxes because it would imply a deep recession. Reducing public spending beyond 2022 will hardly be a possible solution, for the same reason.

These debts will therefore be absorbed by central banks, in one form or another. The same will be true of a large part of corporate debt. What will then be the consequences for the currencies (mainly the US Dollar and the Euro) of these policies? What will also be the medium-term consequences on the equity and bond markets?

One of the most striking consequences will be the influx of liquidity as a result of central bank action, while production will remain relatively depressed and the outlook for investment will be uncertain for several years. Currencies should therefore experience significant fluctuations. The current downward trend in the share in central bank reserves and the US dollar and the euro in favour of the group of “other currencies” (Sterling, Yen, Australian and Canadian dollars, Renminbi) should therefore accelerate. 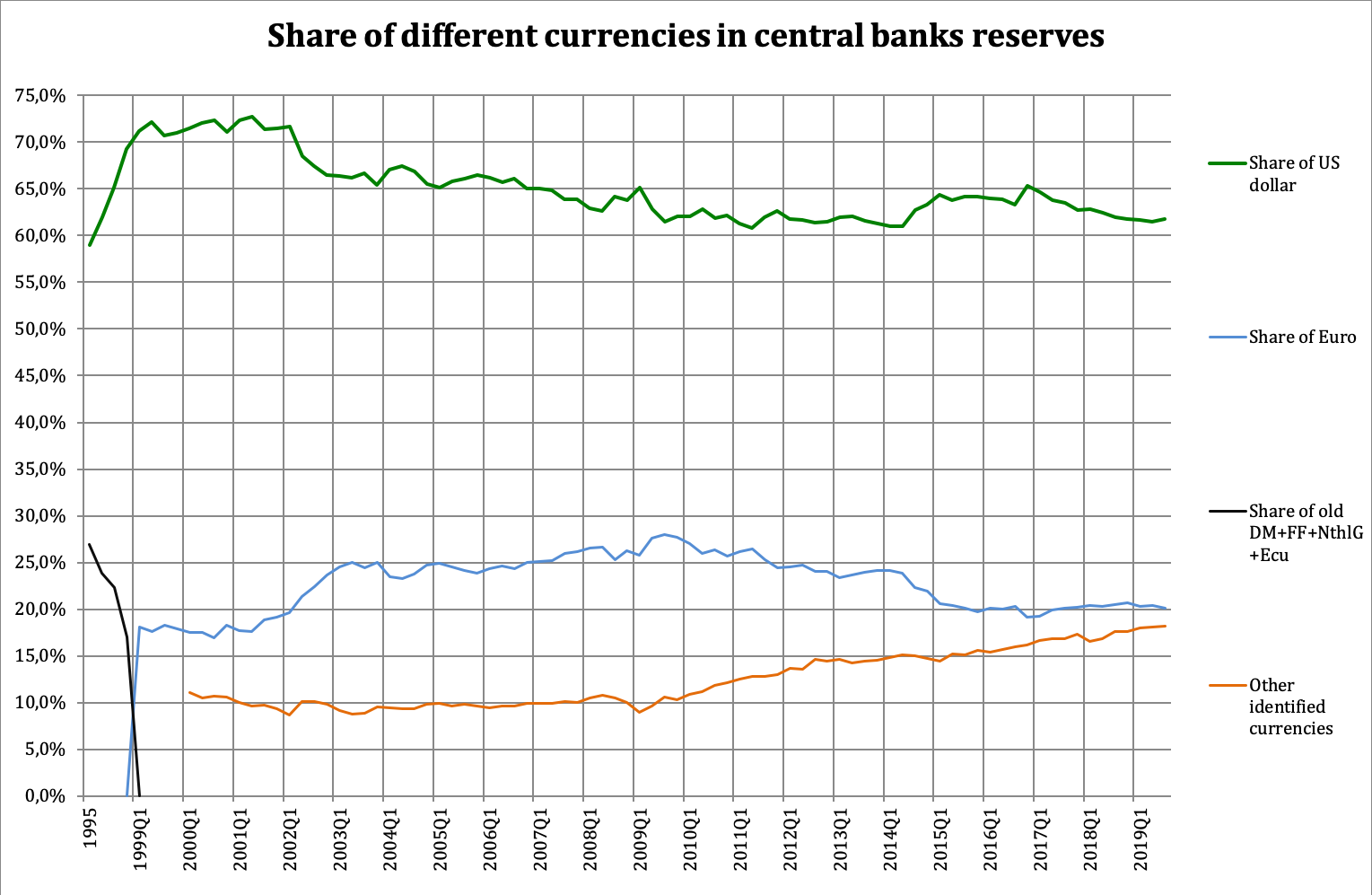 The economy of the “world after” the Covid-19 epidemic will therefore present both the characteristics, in a more accentuated form, of that of the world before but also a certain number of ruptures linked to this epidemic. This combination of strong trends and ruptures will result in a "de-globalized" world which will reorganize itself on the basis of bilateral alliances or regional groupings.

The Global Economy at a Standstill: The World Post-Pandemic Economic and Financial Order
Marc Uzan
The world economy after the confinement will be altered dramatically, more than ever before, more than the aftermath of the Great Depression and the Great Global Recession
Expert Opinions
Views expressed are of individual Members and Contributors, rather than the Club's, unless explicitly stated otherwise.
Tags
coronavirus
Print
Send by e-mail
Send by e-mail
Add to blog
Add to blog

Vladimir Putin Meets with Members of the Valdai Discussion Club. Transcript of the Plenary Session of the 18th Annual Meeting
Brain Drain and Higher Education Abroad

Valdai Club to Discuss the Future of Outer Space
Urbs et Orbis. Urban Civilisation in Russia and How It Affects the Country’s Development