As policy makers around the world are gearing up in crisis mode and taking important decisions to save their national economies, one thing is certain. The world economy after the confinement will be altered dramatically, more than even before, more than the aftermath of the Great Depression and the Great Global Recession, writes Marc Uzan, Executive Director of the Reinventing Bretton Woods Committee. The Macroeconomic environment will be left with the largest public deficit in history in most of the OECD countries and emerging markets, and world debt overhang in history.

“There is only one equilibrium, it is economic inactivity until the danger passes.” This is how Jason Furman, former chairman of the Council of Economic Advisers and Professor at Harvard University, summarized the exceptional state of the global economy.

No one has predicted when the virus outbreak started in China that the global economy will be heading to a near standstill, characterized by a multiple series of shocks emerging at the same time, with the same magnitude that has no precedent in world history. We can name here some of them: A manufacturing and trade shock with disruption of supply chains triggering “thy neighbor’s” dynamics choking off global supply chains. Commodity prices have also collapsed to levels not seen since the early 1970s (oil went down to 25 dollars), triggering a massive sudden stop of private capital flows for emerging markets, higher than one that they have experienced during the super tantrum episode in 2013. There is a major rise in risk aversion: 80 billion dollars has flowed out of emerging market stocks and bonds since the beginning of the outbreak according to the Institute of International Finance, nearly four times the level during the financial crisis in 2008. This situation has put numerous emerging and developing countries on the brink of a balance of payments crisis. Very soon, more than 20 countries might be asking help and support from the Bretton Woods institutions. Potential candidates are Lebanon, Ecuador or Zambia who had trouble before fulfilling their foreign debt payments. The coronavirus crisis will not only lead to a great depression only in China, Europe, Japan and the United States. It will also lead to a serious meltdown, due to the decline in global trade, the capital outflows from these countries and the fall in commodity prices. 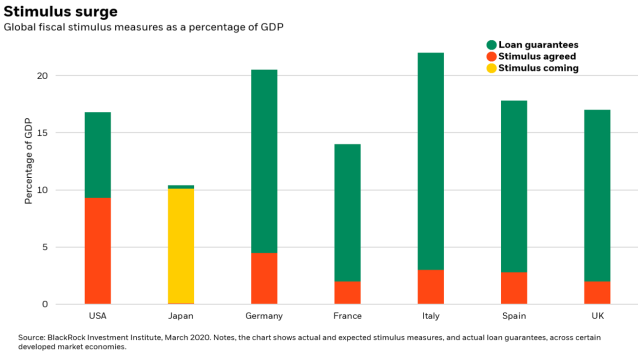 Mitigating first the health crisis has been a priority for all governments. Fiscal policy have been targeted towards social insurance. The policy response to deal with the sudden strop of inactivity in the United states has been to send a one off basic income for every household, and the other aspect of the stimulus package was directed to support small business companies. The Europeans government’ policy was to put in place numerous schemes to protect workers and companies. During this period of confinement, monetary and fiscal policy actions were taken to bridge businesses and households through the shock.

The Novel Coronavirus, Geopolitics and the World Economy
Alexander Losev
The risks of the novel coronavirus outbreak becoming a global pandemic are extremely low, but if the spread of the virus becomes uncontrollable, it can negatively influence internal political processes in China itself and lead to the collapse of economies in a number of regions, as well as the emergence of refugees and mass migration, military conflicts, and humanitarian disasters.
Expert Opinions

Meanwhile, European countries gave up their own fiscal rules, the 3% GDP Maastricht criteria for the time being, an historical decision. The European Commission granted EU members full flexibility in their fiscal rules to allow them to boost expenditure but provided aggressive fiscal and monetary policy actions. What is still pending is a European Hamilton moment, a European Bond issuance (the famous European Corona bond), but it seems that the north and south divide still persists. What might emerge as the compromise among the Eurozone countries might be a European Rescue Fund akin to a European Marshall Plan that will be the main tool for post-pandemic recovery for countries affected by this major shock.

Stringent containment and social distancing policies have brought economic activity to a near standstill. The uncertainty over how far it may spread has left investors and economists to question their own assumptions of supply and demand shock. China GDP fell by 13 per cent in the first two months of the year. Global Unemployment will reach level not seen since the Great Depression.


As policy makers around the world are gearing up in crisis mode and taking important decisions to save their national economies, one thing is certain. The world economy after the confinement will be altered dramatically, more than even before, more than the aftermath of the Great Depression and the Great Global Recession. The Macroeconomic environment will be left with the largest public deficit in history in most of the OECD countries and emerging markets, and world debt overhang in history. We shall witness the end of the separation between fiscal and monetary policy. A dramatic shift of savings and investment around the world will occur where sovereign wealth funds will need to repatriate funds from abroad. Can the global economy become one again? Will it be the end of the paradigm of globalization? Will it stop the rise of China as a super economic power? Will the post-WWII global financial architecture collapse? Will the US dollar remain the reserve currency or will we be seeing an acceleration of digital based currencies?

Conflict and Leadership
How COVID-19 Will Reshape the World
Jacob L. Shapiro
The COVID-19 pandemic will accelerate the shift towards multipolarity. Besides the United States and China, a stronger, more centralized European Union will emerge and behave like a more classically geopolitical entity; Russia will become a buffer zone between China and Europe; India will play an increasingly large role in the global economy; Turkey will seek to become a dominant force in the Mediterranean. Within these various networks, there will be more integration; between these various networks, there will be less economic interaction, writes Jacob L. Shapiro, independent writer, researcher, and consultant on geopolitical risk, global strategies, and international affairs.
Expert Opinions
I have not in this essay touched upon the social, ethical and philosophical consequences of this most important global event of the 21st century. Let me draw briefly some trends that might emerge.

What do we see so far in terms of global policy response that might lead us to start thinking about post pandemic reconstruction? The Federal Reserve has allowed foreign central banks to use their government bonds as collateral for short-term dollar borrowing its new repo facility. Central banks will be able to deal with a sudden stop of dollars. The Federal Reserve has become a global lender of last resort, a global central bank. After all, central banks and central banking will be reinvented: we can call it helicopter money or coordination of fiscal and monetary policy with fiscal policy becoming dominant.

The virus might be also an opportunity to move away from power rivalry, fragmentation, US-China iron curtain, global sanctions, to find and build, as John Ikenberry, Professor of international relations at Princeton, wrote: “a new pragmatic and protective internationalism.” One way toward that goal might be implementation of a coordinated fiscal stimulus, an idea the Valdai Club brought to the agenda of T20, a G20 engagement group for think tanks, earlier this year. New and creative approaches are required as we are going through the most important event of the 21st century, which has already altered the course of world history.

Queen Elizabeth: Farewell to the Twentieth Century
Mikhail Gorbachev. A Game that Wasn’t Saved and Had No Cheat Codes