Expert Opinions
De-Globalization on the Way: The New World and the Democratic Renewal
Jacques Sapir
© Reuters

Events taking place in Latin America, be it the massive social movement in Chile or the victory of the Peronist candidate in the presidential election in Argentina, to which can be added riots in Bolivia are indicators of a important movement against what is called "neo-liberalism". These phenomena are not isolated. Similar movements have taken place in France, particularly the Yellow Vests movement, and others are taking place in Europe or the Middle East.

This challenge to "neo-liberalism" is first and foremost a challenge to austerity policies. But this challenge also calls into question one of the foundations of the modern form of "neo-liberalism": governance by the rules. This follows, in fact, from the logic of globalization. This has often been equated with the liberation of economic exchanges. But, in reality, it carried with it a radical questioning of the sovereignty of nations, and not even of democracy.

When I wrote my book La Démondialisation in 2011  , it was already possible to perceive the signs of this global globalization. The observation that can be drawn from the last ten years is that this globalization has generated deep and powerful forces of protest, forces that have only strengthened. It is contradictory to the very existence of democracy.

Globalization on the brink ?

Events that constitute the fabric of this rejection of globalization have been spread over a fairly long period. The paralysis that won the WTO and the "Doha Round" in early 2010 is proof of this. If we consider the period from 2016 to 2018 we had, the Brexit, which remains a major shake-up of the European Union, but also the election of Donald Trump, which meant the end of free trade agreements discussed for several years, such as TTIP , and renegotiated the treaty with Canada and Mexico (NAFTA). The process of de-globalization has thus accelerated for several years. It now takes the turn of the violent contestation of the economic and social consequences of the policies implemented in the name of the "rules" by which it was intended to replace democracy.

This de-globalization was marked by the stabilization and then the fall in the share of trade, whether the latter is measured in volume or measured as a percentage of world GDP. 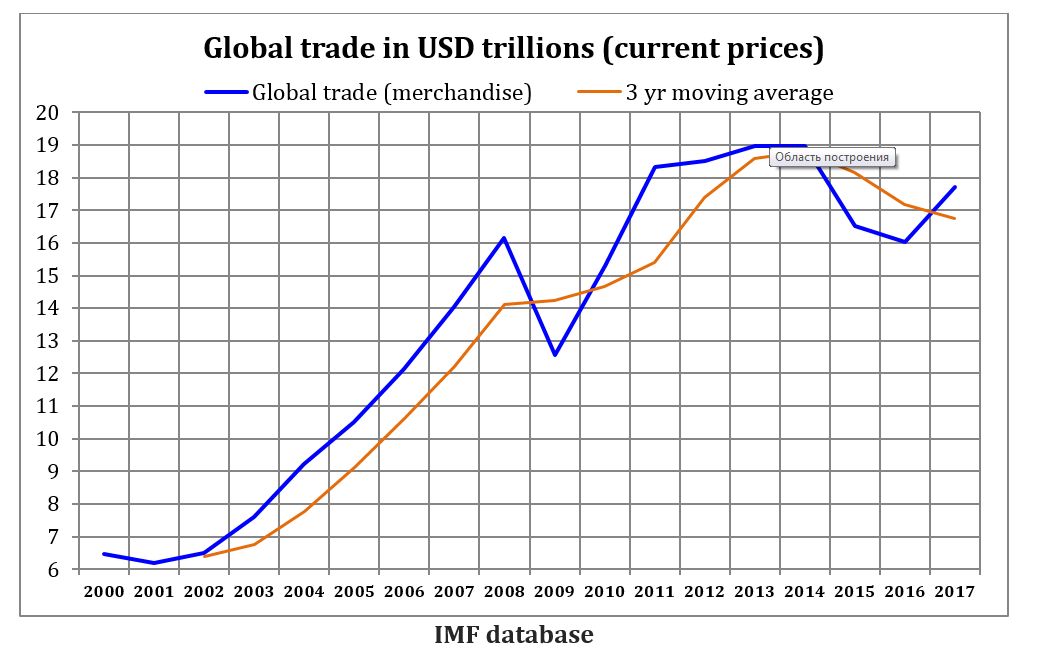 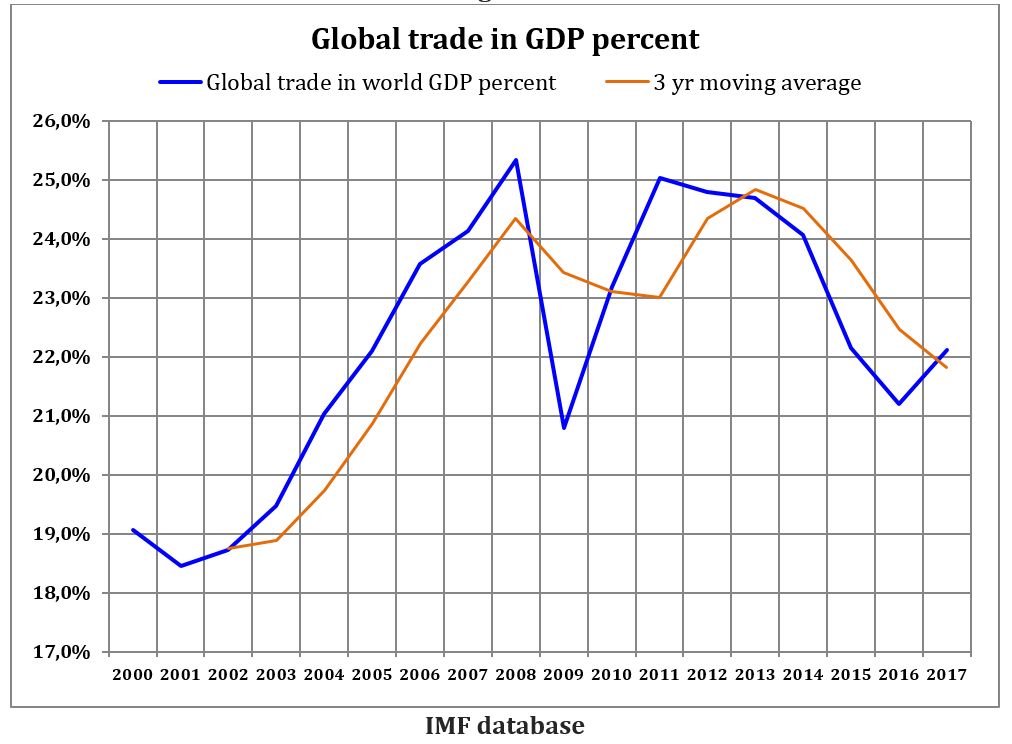 If between 2000 to 2006 trade increased at 2,6 times the world GDP rate 2008 to 2017 trade amount increased from 16.1 to 17.7 trillion, an increase of 10%, lower than that of world GDP. The spring seems so broken. The decline in the percentage of these world exports relative to world Gross Domestic Product clearly indicates that the weight of international trade in world wealth is itself declining. On the other hand, it also tells us that a growing share of wealth is actually being produced to feed the domestic markets of various countries.

Politically, this is also reflected in the loss of influence of the G-7, which met last August. It has lost much of its economic importance and its legitimacy. After having surpassed 65% of world GDP at the end of the 1980s and in the 1990s, and having expanded to Russia for the G-8, its weight has now fallen well below 50%. And there is a clear link between this loss of legitimacy and this loss of influence in world GDP. In fact, when the G-7 expelled Russia in 2014, he probably signed its death warrant. 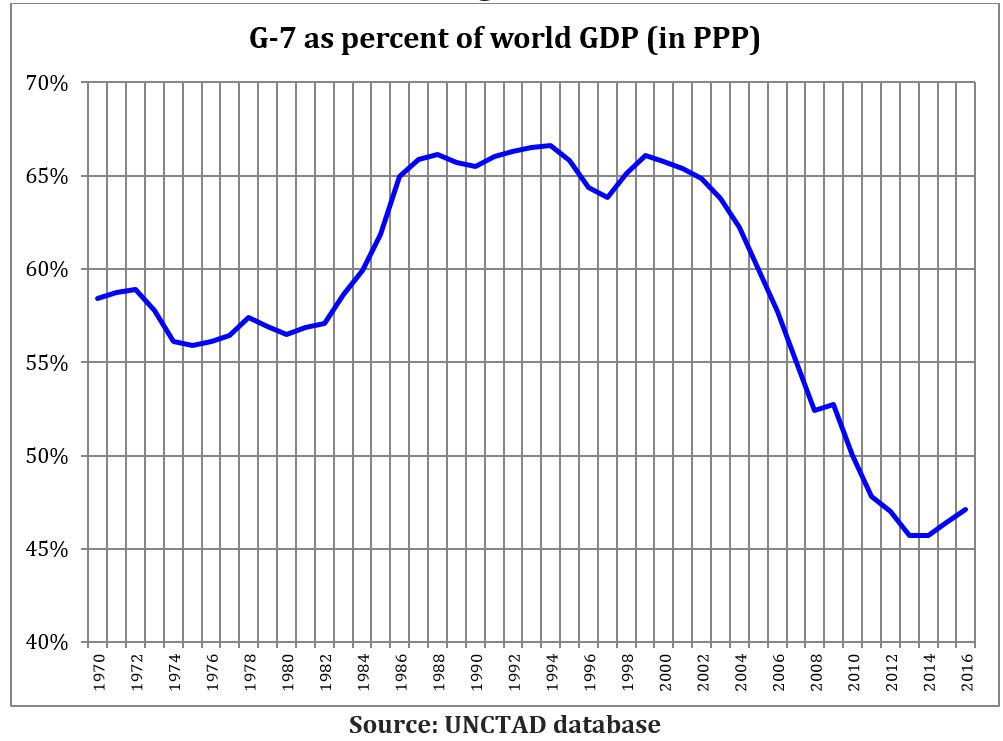 It is interesting that Russia does not seem interested by returning to the G-7. Moscow draws lessons from the transformations of the global economy of the last fifteen years and intends to focus on the G-20, as Sergey Lavrov says: "In the G20, ultimatums do not work and you need to reach agreements (...) I think this is the most promising format for the future. "This idea of the multipolarity of the world is then combined with a clear vision of the role of sovereignty

De-globalization and the aspiration to more democracy

But this is also evident in the country that presented itself as the very heart of the globalization process, the United States  . With the election of Donald Trump, the United States turned its back on multilateral agreements. More indirectly, through the policy of economic sanctions they use and abuse, and this is actually much before the election of Donald Trump, they accelerate the fragmentation of the global economic space. De-globalization has thus passed from the stage of possibility to that of fact; then it went from that of fact to that of major one. The return to the first rank of nations as political actors is essential  .

This should make us realize that we are living in a dangerous period because, in fact, the frozen order of the "Cold War" has not succeeded in fact any stable system organizing relations between nations. The desire of some to question the sovereignty of nations has, moreover, durably unbalanced the framework of international relations. As Hamlet says, "This time is out of joint"  .

Some confuse this term with a voluntary or fortuitous interruption of trade flows that run all over the planet. They thus confuse protectionism, which can be amply justified by economic theory, and the practice of autarky which, very often, is a harbinger of war. They are also mistaken about the nature of the link between GDP growth on a global scale and the volume of trade. Recall here that it is GDP growth that drives trade, not trade, which drives GDP. But, above all, they forget that these exchanges, exchanges of goods, services, but also cultural exchanges even financial exchanges, are much older than the phenomenon called "globalization". Because it is not reduced to the existence of these flows.

What had brought out the phenomenon of globalization and made it into a generalized "social fact" was a double movement. There was both the combination, and entanglement, of commodity flows and financial flows AND the development of a form of government (or governance) where the economy seemed to outweigh the policy, business States, norms and rules on politics. However, on this point, we can only note a recovery by the States of these flows, a victorious return of the political. This movement is called the return of state sovereignty. Sovereignty is indispensable to democracy  . We have examples of states that are sovereign but not democratic, but no one has ever seen a state that was democratic but not sovereign.

This recovery is also accompanied by an uprising of peoples against the effects of globalization insurrection that today goes from Chile to Lebanon, through this "old" Europe with the Brexit and the movement of Yellow Vests. This insurrection can take very different forms. What happens, however, is the revolt of a population that has been impoverished by globalization  , and who feels humiliated and dispossessed of his ability to decide his life. It has been said, and rightly so, that the Yellow Vests movement was a revolt in peripheral France, a concept popularized by a geographer, Christophe Guilluy . But, and this point says a lot about the depth of this movement, it has also launched bridges to other social categories that, like this peripheral France, suffer from globalization.

De-globalization will be the great return of politics on "technique", the sovereign decision on the automaticity of standards. Now, the "technique" is embodied today mainly in the economic and the financial. The de-globalization is basically the return of sovereignty. To be sovereign, it is above all to have decision-making capacity  , which Carl Schmitt expresses also in the form "Is sovereign the one who decides the exceptional situation" . We must read Carl Schmitt if we want to hope to have an understanding of the future  . For the question of the relationship of political decision to rules and norms, and thus the question of the delimitation of the space governed by politics and that governed by technology, is indeed constitutive of the debate on sovereignty.

Not that the economic and financial reasonings are made to lose all importance. In fact, taking into account the economic elements of power and sovereignty is an integral part of the process of de-globalization. Not that there are spaces in our societies governed by the technical order, or at least spaces dominated by technical legitimacy. But these dimensions will now become second in relation to politics, which will recover its rights. The economic and the financial will become instruments in the service of politics. And with this strong return of the political, we will be able to have that of the democracy, of an order which draws its legitimacy not from the market but from the people, which is put at the service of the interests of the people, and which materializes in the power People.

The phrase of Lincoln, pronounced in his famous address of Gettysburg on November 19, 1863 which commemorated one of the most terrible and bloody battle of the Civil War  , "Of the people, for the people, by the people" will find all its meaning. The de-globalization, therefore, must be understood as the return of sovereignty, that of the Nations of course that we had analyzed in a book of 2008, because that is how the people express themselves, but knowing too well that sovereignty must take the form of a true democracy and not a formal democracy of the sovereignty of the people. This is why de-globalization must be regarded as a positive thing, because it implies the reaffirmation of the sovereignty that makes democracy possible and then determines the context of future political struggles.


Views expressed are of individual Members and Contributors, rather than the Club's, unless explicitly stated otherwise.
Tags
globalization
world order
Print
Send by e-mail
Send by e-mail
Add to blog
Add to blog

Multilateralism: The Only Correct Choice For Solving Global Problems
From Corporates to International Governance: The Coming of the ‘Platform Economy’

Long Trends and Disruption: The Anatomy of the ‘Post World’ of the Covid-19 Crisis
Turkey’s Activity in the Military-Political Processes in the Caucasus