The relationship model, adopted in 1990s, was based on the impossible task of "Europeanization of Russia" in accordance with the regulations of the European Union.

The Valdai Discussion Club in cooperation with the European Council on Foreign Relations (ECFR) held on March 14-15, 2016, a seminar entitled "Relations between Russia and the European Union: A New Stage?"

At the first session of the seminar, entitled "EU-Russia relations: What next?", the participants discussed prospects of bilateral relations, which are experiencing an obvious crisis. Particular attention was paid to five principles of the EU-Russia relations, adopted on Monday, March 14 at the EU Foreign Ministers meeting in Brussels. According to the European experts, these principles, adopted unanimously, suggest that the EU was able to define its goals and objectives regarding Russia, now it's Russia's turn to express clearly what it wants from the relationship with the EU.

Representatives of the Russian side considered the "five principles" as rather the formal bureaucratic document, but noted that problems in bilateral relations give Russia and the EU a chance to abandon the accumulated negative potential and psychological stratifications for the first time in 25 years. Now it is possible to express openly their positions, based on pragmatic interests, without being distracted by the debates about the civilizational identities of the parties and the desire/need to accept European values.

According to Russian experts, Moscow's goals regarding the EU include learning to speak the language of interests, seeking transparency in relations and dialogue not only with Brussels, but also with the governments of single EU member states, business communities and civil society. This corresponds to the principle of subsidiarity, which is one of the fundamental EU rules.

During the second session of the seminar entitled "How should Russia talk to Europe and Europe talk to Russia?" experts tried to identify the most dramatic differences that prevent the full-fledged dialogue.

According to the panelists, the relationship model, adopted in 1990s, was based on the impossible task of "Europeanization of Russia" in accordance with the regulations of the European Union. Russia at that time was in serious condition, trying to overcome the consequences of the collapse of the Soviet Union. It has adopted the EU terms and in fact agreed to be an object, but not the subject of rulemaking. This led to the widening of tensions in the future.

Russia and the EU should build relations on a fundamentally new pragmatic basis, acceptable to both sides. If the negotiations will rest on the principle of the immutability of the EU and Russia's "DNAs", the dialogue will remain gloomy. The first step to improve the situation should be the desire to start a process of serious and respectful search for mutual understanding.

The third session of the conference entitled "The Middle East: How can Russia and the EU cooperate?" was devoted to the possibilities of cooperation in the Middle East region. Panelists concluded that long-term plans for the Middle East simply can't exist. To date it is possible to speak only about temporary cease-fire and establishment of contacts among all actors in the region. Current relations between Turkey and Russia were also discussed. According to experts, Russia is not interested in weakening of Turkey, and cool relations between two countries can't continue indefinitely.

In general, during the session the experts pointed out that any negotiations should first and foremost take into account views of regional players and civil society institutes. The regional system can't be constructed only under the influence of Moscow, Washington and Brussels. 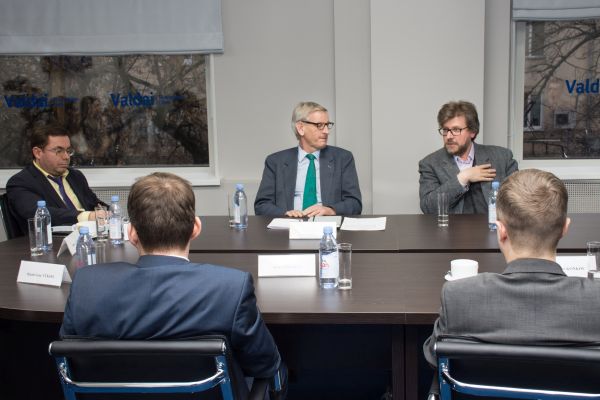 Valdai Club to Discuss the Chinese Factor in Russia-India Relations
Serbia and Russia: Why Do We Know So Little About Each Other?

The Bolivarian Republic and the United States Empire: Venezuelan Foreign Minister Speaks about the Country's Struggle for Sovereignty
Russia and Serbia: From Historical Memory to Future Relations

Related articles
Disconnecting From SWIFT? No, We Did Not Hear About It Follow the link
‘Strategic Frivolity’ of the West and the Belarus Issue Follow the link
Covid-19 Pandemic as a Stress Test for the Unity of the European Union Follow the link