Economic Statecraft
Expert Opinions
Russian Gas Exports to Europe: In the Eye of the Storm
Vitaly Yermakov
© Sputnik/Ilya Pitalev
Amid hostilities in Ukraine and the avalanche of the European economic sanctions against Russia, Russian gas has been flowing to Europe, including the transit via Ukraine, without interruption. For now, it looks like Russia-Europe gas trade has been in the eye of the storm (an area of calm weather at the centre of a strong cyclone).

But can it remain immune to the greatest geopolitical crisis of this century? As a sign of how harsh the rhetoric has become, on March 1, French Finance Minister Bruno Le Maire declared an "all-out economic and financial war" against Russia to bring down its economy as punishment for its special operation in Ukraine.

Russian deputy prime minister Alexander Novak, speaking on Russian state television on March 7, announced that a rejection of Russian oil and gas would lead to ‘catastrophic consequences for the global market’. Novak criticized Germany’s decision to block Nord Stream 2 and said: ‘We have every right to make a matching decision and impose an embargo on gas pumping through Nord Stream 1 gas pipeline’. But Russia, proceeded Novak, is not doing that because it acts responsibly and understands how big a negative impact of gas flows interruption could cause for all involved.

The escalation, however, is continuing, with each side raising the stakes. What will happen if Russian gas flows to Europe stop? And is there any prospect of normalization of the future Russia-Europe economic relationship, or the damage is beyond repair?
Meanwhile, Russian gas has been flowing to Europe, and Gazprom has been a reliable supplier, meeting the nominations of its European clients (See Figure 1). 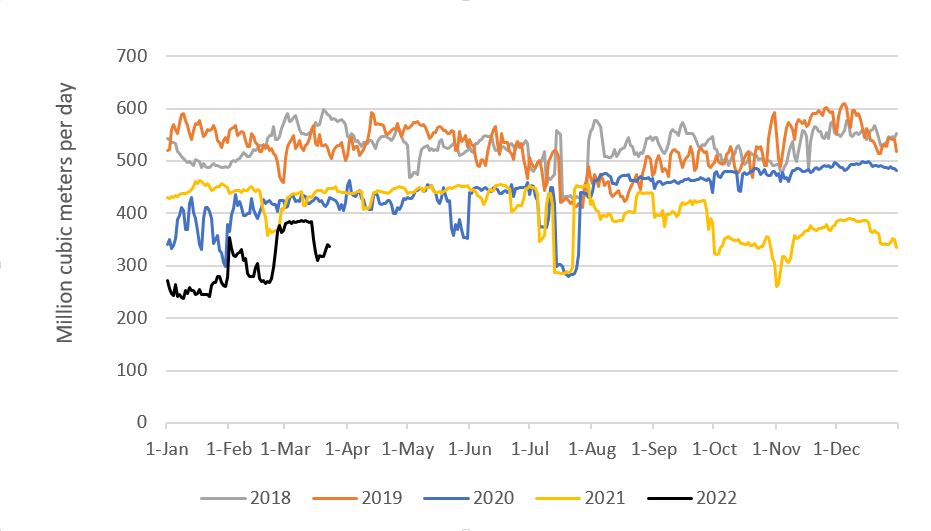 In a bumpy start of the year, the European buyers of Russian gas reduced their nominations in an attempt to wait out the spike in the Gazprom contract prices in January. But once European hub prices started to exceed the Gazprom contract prices again, European buyers raised their nominations under long-term contracts with Gazprom. As a result, Russian export gas flows bounced back in February and increased further in the first decade of March. In the second half of March, however, Gazprom deliveries to the EU started to plunge again, reflecting warmer weather and a new spike in gas prices that reined in demand.
At the time of writing the statistics on Russian gas flows to the EU is available through March 19th. It is noteworthy that gas flows via Ukraine have not been interrupted amid the military conflict between Russia and Ukraine. In fact, they went up since February 24th and have been around 109 million cubic meters per day to date, that is at the level stipulated in the transit agreement between Gazprom and Naftogaz for 2021-2024 (See Figure 2). 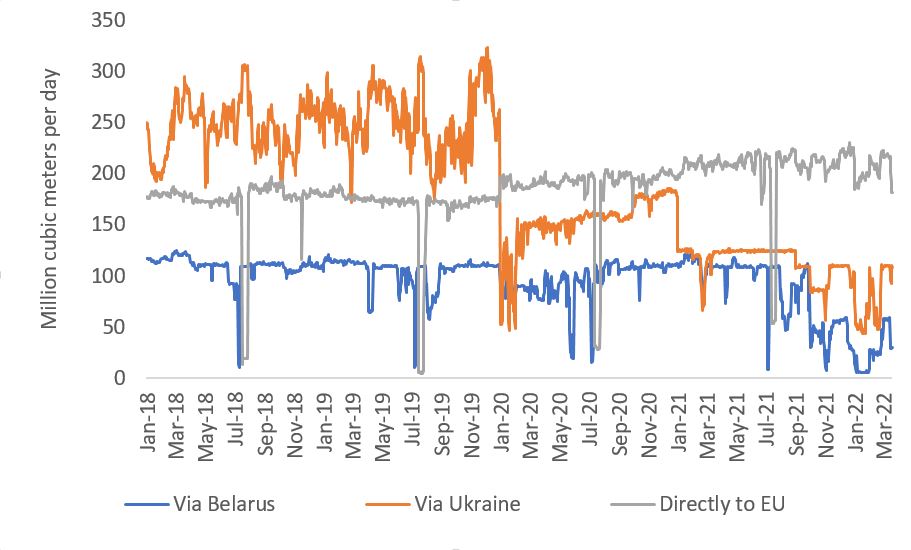 In the past two years we witnessed a shift from a buyer’s market with plentiful supplies and very low gas prices in Europe in 2020 to extreme tightness and a seller’s market in 2021-22. The gas crunch in Europe started to unfold in Q4-2021 and has resulted in unprecedented spikes in gas prices, concerns about energy security and fears of energy poverty. The shock has been exacerbated by the tragic military conflict in Ukraine. On March 7, 2022, gas prices at the European TTF hub spiked to an all-time record of $3800 per cubic meter. This level of prices, about seventy times higher than gas prices in the Russian domestic market, means that the European gas market is in chaos and is pricing in possible supply shortfalls and extreme energy insecurity. Presently, gas prices at European hubs have retreated to about $1200 per cubic meter but remain at historically extremely high levels.

For over 50 years, Russia-Europe gas relationship has been underpinned by the concept of cooperatively managed interdependence producing mutual benefits.  But it cannot remain immune to the increasing geopolitical animosity between the great powers and the emergence of extreme bargaining positions.

Gazprom has been an involuntary balancer for the European gas market during the past decade when it had a tremendous overhang of spare productive capacity but has never aspired to play a role of a guaranteeing supplier of last resort. In contrast to its obligations in Europe, Gazprom is required by law to act as a supplier of last resort in Russia. Amid a relatively tight global gas supply in 2021 Gazprom’s spare productive capacity overhang has also been reduced to the “normal” levels. The near-term capacity is sufficient to meet the company's obligations under the long-term export contracts and seasonal demand peaks at home, but meeting additional demand requires investment in new capacity. In this situation by the end of 2021 the company seemed to be willing to test the limits of its market power in Europe by sticking to its traditional motto: “First we sell gas, and only then we produce it”. Gazprom appeared to signal to potential European buyers that while the market was tight it was going to focus on revenue maximization, even if it meant the reduction of its market share. At the same time, Gazprom apparently thought that it could keep its options open with regards to reversing course and targeting market share in the future, when the business cycle results in a long gas market in Europe.

Gazprom’s message to its European counterparts prior to the military operation in Ukraine seemed to be that it would invest in new productive capacity targeting the European market and that is needed to ensure higher flows of Russian gas to Europe only if it had contractual assurances of security of demand. This is not surprising given that the infrastructure and major production investment decisions are very difficult to justify against sales into a market in transition to decarbonized energy with an uncertain outlook for unabated gas demand.

A corollary of this near term European “wait and see” gas export strategy for Gazprom was the growing sense of urgency in securing alternative export markets in Asia, where energy transition is going to take much longer and where the buyers continue to view security of supply in the traditional sense as an obligation to deliver physical molecules and consider long-term contracts as a viable insurance. A new gas contract between Russia and China signed in the beginning of February 2022 and the continuation of talks about an even larger deal meant that the re-allocation of Russian investments away from the projects that target the European gas market was gaining momentum. This would not yet represent a direct threat to Europe’s energy security, but if the decarbonisation did not go as fast as targets dictate and non-Russian gas/LNG supplies are limited, the limited availability of Russian gas might become a serious threat for Europe.

The special operation in Ukraine changed all that. Now it looks as there is no time for an orderly transition and adjustment. Europe is saying that it would diversify away from Russian gas as fast as possible irrespective of collateral damage of such a move. In turn, Russia needs to urgently accelerate its ‘Pivot East’. Geopolitical tensions might make the disintegration of mutual confidence and good will and reduced gas interdependence irreversible. But the manner in which Europe and Russia manage their ‘gas divorce’ matters a great deal.

A hasty separation could impose a heavy toll on both sides, for energy security in Europe, and export revenues for Russia. For the next several years, neither side has a realistic opportunity to make radical changes to its natural gas trade without damaging their economies or is able to take its gas business elsewhere as a matter of deliberate commercial policy. It they do it under political pressures of the moment, the economic losses to both sides will be tremendous. For the 2030s, however, scenarios of a radical energy transition in Europe and a fast diversification of Russia’s gas exports toward Asia seem most likely way forward. Both would represent experimentation on a grand scale with uncertain economic and geopolitical consequences.  The 2021/2022  ‘winter of discontent’ is a powerful reminder of how big a role energy plays and how carefully the policymakers must thread to avoid disruption and irreparable damage.

Concerning Valdai Club’s Activities on Social Media and Online Video Platforms
Recession Ahead: What Are the Remedies?

Religious Diversity and National Stability: The Experience of Russia and the World
The Importance of Religious and Cultural Factors in Determining the New Eastern Policy of the Russian Federation: A View From Tajikistan

Why International Institutions Survive: An Afterword to the G20 Summit
Values ​​and Dreams of Values ​​in Modern Society

Related articles
The Illusion of Control: Introducing Price Caps on Russian Energy Might Backfire Follow the link
Winter Is Coming: Social Expectations from the First Military Winter in Europe Follow the link
The Erosion and Undermining of the Transatlantic Relationship Follow the link