On October 23-24, the city of Sochi on the Black Sea, often called the southern capital of Russia, will become the venue of the Russia-Africa Summit, the first in history. It will be held under the slogan “For Peace, Security and Development” and will be accompanied by an Economic Forum. The Summit will be co-chaired by two presidents, Vladimir Putin and Abdel Fattah el-Sisi from Egypt, the current chairman of the African Union. According to the latest official information, 47 African heads of state confirmed their participation in the Russian-African summit in Sochi, eight African integration associations and organisations will take part in it. Following the summit, it is planned to sign a political declaration on the main areas of Russian-African cooperation, as well as a large package of agreements related to trade, economics and investment.

The term “return” is often used to describe Moscow’s activities on the continent. Indeed, during Soviet times, Russia fruitfully collaborated with Africa in various fields. The USSR provided vital assistance to countries struggling to achieve independence and democracy in Africa, especially in the south of the continent. I recall the words that Nelson Mandela said to me in July 1991 during the first national conference of the ANC after the ban on this organisation was lifted: “Without your support, we would not be where we are now.”

However, soon after radical political changes in Moscow, the situation sharply worsened. The Russian economy crashed: according to the late Yevgeny Primakov, a deeply respected statesman, the losses for the Russian economy as a result of the so-called “market reforms” in the 1990s exceeded by more than two-fold the losses witnessed during the Second World War. This coloured Russia’s international relations; the Global South and especially Africa were sacrificed to fruitless attempts to obtain soft loans and technology from the West. This neglect clearly manifested itself in the closure of a number of Russian embassies and consulates, almost all trade missions, and 13 of Russia’s 20 cultural centres in Africa. Most of the development projects supported by the USSR in Africa were closed, and all regular flights of Russian airlines were cancelled.

In addition to the economic disaster of the 1990s, the psychological factor was also important; Soviet aid to Africa was used as a “scapegoat” in trying to justify the country’s problems, reinforcing xenophobia and racism. Thus, although it would be wrong to say that Russia left Africa, there were not so many muscles left on the skeleton of bilateral relations.

So one should not be surprised that the first summit bringing together Russia and the leaders of African countries should take place after almost three decades. Of course, positive shifts in Russia’s foreign policy have been taking place for a long time, and the explanation commonly given is that the country got a new leader at the turn of 2000. However, they started earlier, in January 1996, when Primakov replaced Yeltsin’s foreign minister Kozyrev, who is now living in Miami. The position of Russia strengthened over the following decade, thanks to Russia’s accumulation of large gold and foreign exchange reserves and its repayment of most of its public debt.

Russia and Africa need each other. Moscow always remembers that the 54 African states represent a strong electoral bloc within the UN and other international organisations. Russians, like Africans, value their independence and resist foreign pressure; they value the growing role of Africa in the international arena. 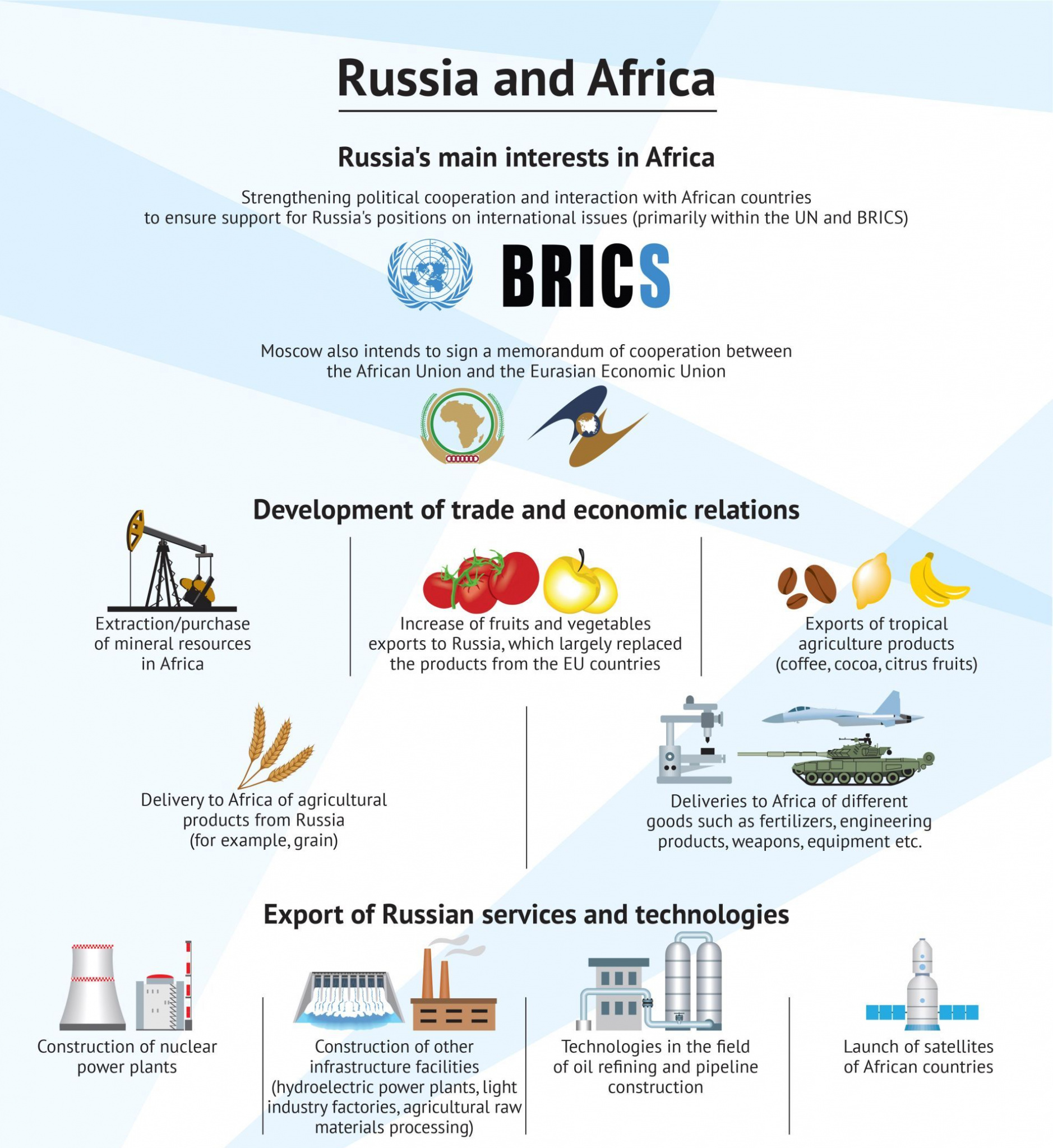 On the other hand, the Africans know that Russia can provide the latest technology in a number of areas, especially those related to our first-class defence industry. Our economy is far from being “in tatters,” as Barack Obama claimed. On the contrary, it has effectively overcome Western sanctions.

Great potential for cooperation exists in the field of education. Currently, more than 10 thousand Africans are studying in Russia, half of them thanks to funding provided from the Russian budget. Thus, the good tradition of Moscow’s cooperation with Africa in enhancing its human potential was resumed after a break coinciding with “Yeltsin’s reign”.

Russia helps most African countries strengthen their defence and security. In particular, over the past five years, more than 2,500 troops from African countries completed their training at the military schools of the Russian Defence Ministry.

However, the state of bilateral economic relations leaves much to be desired. Moscow seeks to create favourable conditions by writing off the debt of African countries ($20 billion), as well as introducing a system of preferences for traditional African export goods. However, trade turnover remains limited, at less than 3% of Russia’s total foreign trade. According to the African Development Bank, Russian investment in Africa peaked at $20 billion, although its flow is hardly stable. Unfortunately, in these areas Western sanctions have become an obstacle in recent years.

However, another, even more serious obstacle to the development of comprehensive ties is the lack of objective information about Russia in Africa, and about Africa in Russia. The potential of our relations can be realised only if both sides shed the stereotypes imposed from outside and develop mutually beneficial cooperation, grounded in reality.

Of course, it is by no means accidental that just now the anti-Russian campaign has intensified, distorting opinions regarding Russia’s policy towards Africa and the country’s practical activity there. Russian Foreign Ministry spokeswoman Maria Zakharova mentioned “a staggering amount of anti-Russian publications, in particular, in the American media ahead of the Russia-Africa summit. This, of course, is an unprecedented story; we understand that someone is directing it.”

Recently, much has been written about the “new battle for Africa”. Someone even asked whether Russia replacing the “African expansion of China.” Russia’s position on this issue was clearly explained by President Putin on the eve of the Sochi summit. He emphasized that “we are not going to participate in a new ‘repartition’ of the continent’s wealth; rather, we are ready to engage in competition for cooperation with Africa, provided that this competition is civilised and develops in compliance with the law. We have a lot to offer to our African friends.... Our Africa agenda is positive and future-oriented. We do not ally with some against others; and we strongly oppose any geopolitical ‘games’ involving Africa.”

Russia-Africa Summit: Economic Transformation and Security Arrangements
Nathalia Zaiser
Russia has a bundle of benefits and opportunities awaiting it in Africa. It is important not to invest blindly and not to offer immediate help, but to play the long game - to work for the future and through concrete action, stimulate the economic growth of the continent itself.
Expert Opinions
Views expressed are of individual Members and Contributors, rather than the Club's, unless explicitly stated otherwise.
Tags
Africa
Russia-Africa Summit
Print
Send by e-mail
Send by e-mail
Add to blog
Add to blog

Related articles
Times of Great Confusion: On the Concepts by Which We Comprehend the World Follow the link
Dialogue of the Deaf: Prospects for the Transformation of Russian-German Inter-Societal Relations Follow the link
LIVE: The Baltic Region: What Will the Unprecedented Militarisation Lead to? An Expert Discussion Follow the link