Taking into account recent events, such “universal” themes of American foreign policy agenda as promoting democracy and the fight against terrorism no longer resonate, even among overly loyal supporters of the United States. What remains is what a person cannot live without: clean air and clean water, writes Valentin Uvarov.

The climate agenda is set to dominate the US foreign policy agenda during the next four years, and perhaps even the next decade. The metric used for determining who is friend and who is foe (the source of evil) is the size of their carbon footprint, which is calculated in tonnes, either in absolute terms or in per capita terms. In this regard, one can refer to the table from the “Emission Gap Report 2020” of the United Nations Environment Programme (UNEP). The graphs show that China is the absolute leader in terms of the amount of greenhouse gas emissions, and the United States and the European Union rank second and third; Russia is fifth. However, in the per capita chart, China ranks fourth, and the United States and Russia are in first and second places, respectively, while the European Union ranks fifth, behind Japan and China. 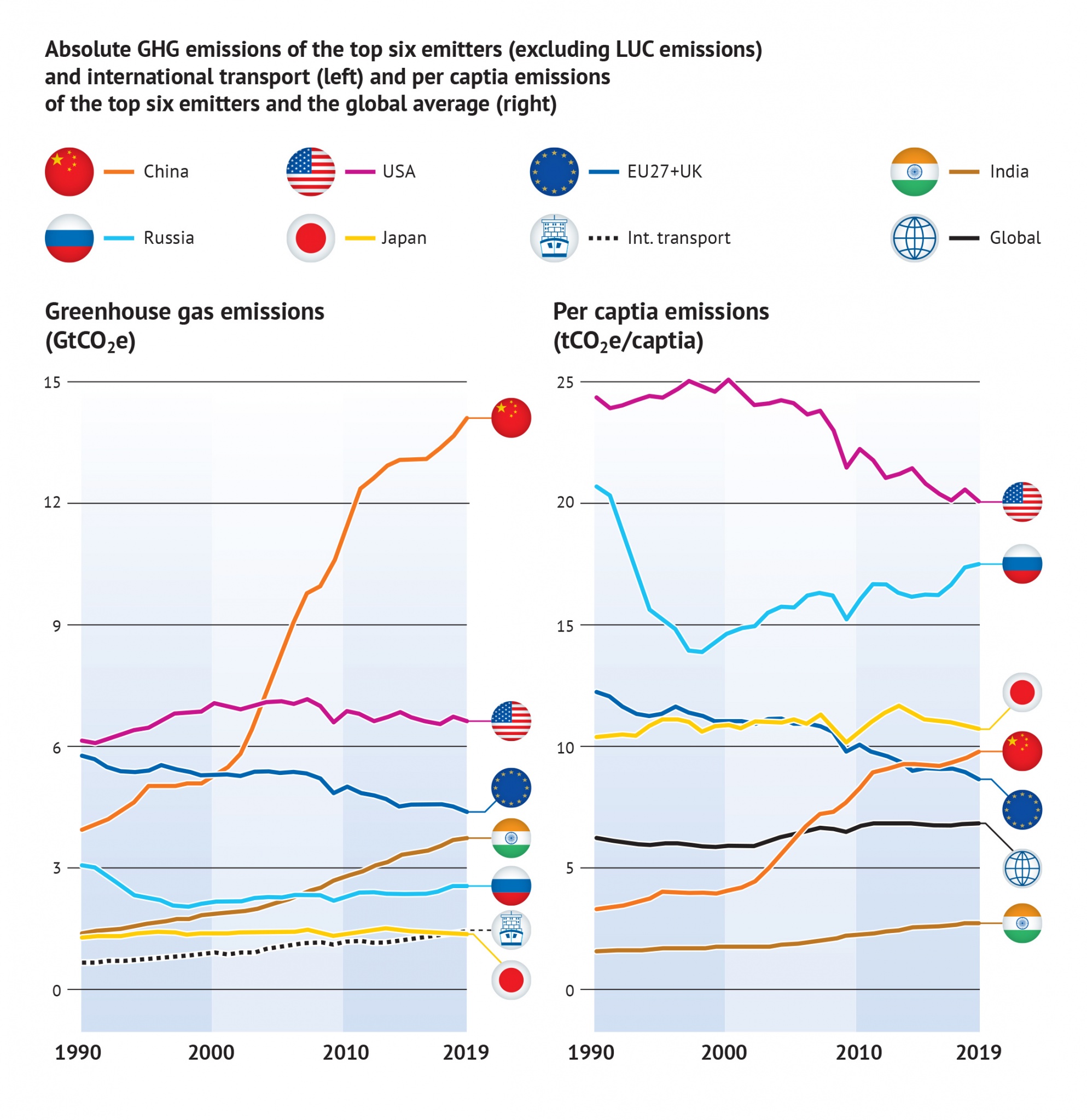 In the near future, these numbers and ratios could become an object of attention and controversy for all humanity, if we take into account the provisions and goals of Biden’s Plan for a Clean Energy Revolution and Environmental Justice.

In the “Climate Manifesto” (this is how the document can be called), published on the website of the election campaign of the 46th President of the United States, the intention was announced to draw up a list of names of “climate culprits”. Similar to the human rights ranking, the US Department of State will be tasked with preparing a new Global Climate Change Report to hold countries responsible for non-compliance or to force them to report on compliance with the Paris Agreement, as well as for other steps that undermine global climate solutions.

The fact that the climate agenda is a serious matter for Biden and confirms his intention to adopt the Clean Energy Revolution legislative package as a matter of priority. In Biden’s Climate Manifesto, the word “revolution” is used quite often. Along with the Clean Energy Revolution, he mentions the Clean Economy Revolution, which is opposed to the industrial revolution. It has been repeatedly emphasised that within the US, it is necessary to ensure that communities affected by climate change and pollution are the first to benefit from the Clean Economy Revolution. The most affected by the industrial revolution include Black Americans, Hispanic communities, and poor whites.

How the Climate Agenda Will Change Our Lives
Climate change, which only recently seemed to be an issue for a small group of scientists and environmentalists, has become a universal concern. We showed in the first two parts of the Climate and Politics project that climate issues are now on the agenda of both politicians and business people. The third part is devoted to the impact of climate change and the fight against it on the transformation of societies.
Expert Opinions

These provisions correlate with three other “plans” that shaped Biden’s campaign platform: the America Rescue Plan, the Plan for Black America, and the Plan for the Hispanic Community.

Biden says investment in the Clean Economy Revolution will be the largest- ever investment in clean energy research and innovation. It is noted that in terms of its effect, this can only be compared with public investments after the Second World War in scientific research and cooperation between universities and private business. Biden is committed to invest $400 billion over ten years in clean energy, and compares this with the Apollo programme, which only got half this level of funding.

Biden’s Plan for a Clean Energy Revolution and Environmental Justice includes the provisions of the new president’s foreign policy agenda in the section about bringing the rest of the world together to fight the climate threat. Biden demands that all countries in the world rally around the United States, which during the Obama administration mobilised the entire world to achieve the 2015 Paris climate agreement. Along with pledging to return to the Paris Agreement on the first day of the new administration, Biden stresses that it will be only the first step in an important and sustained effort to skyrocket global climate ambitions.

During his first 100 days as president, Biden promises to:

Biden further proclaims the principle that trade policy is inseparable from the US climate goals. It is announced that the US administration will impose carbon adjustment fees or quotas on carbon-intensive products from countries that do not meet their climate and environmental commitments, and future trade agreements will be conditional on partners’ commitments to raise nationally-determined contributions (NDCs) under the Paris agreement.

Biden promises to reform the standards of the International Monetary Fund and regional development banks and link the financing of infrastructure projects to carbon footprint assessments, as well as engage US development institutions to “stop financing dirty energy”. In this regard, the intention is announced to ensure that the Export-Import Bank and the American International Development Finance Corporation (DFC) significantly reduce the carbon footprint in their portfolios.

The new Clean Energy Export and Climate Investment Initiative will provide incentives for US firms to bring low-carbon solutions to the global marketplace and boost US manufacturing and job creation. The initiative will prioritise partnerships with countries that have high commitments under the Paris Agreement.

By identifying the ways and tools in the fight for a bright climate future, Biden makes it clear who is most likely to be forced to report on the fulfilment of the obligations under the Paris Agreement. Biden intends to create a “united front of nations” to hold China responsible for non-compliance with environmental standards in infrastructure projects under the Belt and Road Initiative.

The revival of the Monroe Doctrine is planned through investment in clean energy and sustainable infrastructure to achieve innovative growth that “will help the United States achieve the vision of the hemisphere from Canada to Chile as a safe and democratic zone.”

According to the Biden plan, climate change will become one of the main priorities of national security. In order to respond to the geopolitical risks posed by climate change as a “threat multiplier”, Biden intends to mandate that national intelligence agencies assess the impacts of climate change on national and economic security, including water scarcity, risks of conflict, the impact on the fragility of states, and the security implications of large-scale migration.

All four of Biden’s plans are “organically” intertwined and this can be seen in the context of the dangers to which Biden draws the attention of his electoral base. “People of colour” and low-income communities are more likely to live in areas that are vulnerable to flooding and other weather-related events caused by climate change, he said, and failing to cut emissions disproportionately harms Blacks and Hispanics, who are 37% more exposed to nitrogen dioxide (a toxic pollutant) compared to non-Hispanic whites.

Taking into account recent events, such “universal” themes of American foreign policy agenda as promoting democracy and the fight against terrorism no longer resonate, even among overly loyal supporters of the United States. What remains is what a person cannot live without: clean air and clean water. The theme is a win-win and the fact that the fight is going to be serious is evident, even from some of the theses cited above.

I would like to finish with the following excerpt from the article “What Donald Trump and Dick Cheney Got Wrong About America” from the January, 2019 issue of the The Atlantic:

When I was Joe Biden’s national-security adviser, we paid a visit to Lee Kuan Yew, the former prime minister of Singapore, who expressed admiration for America’s famed “black box.”

“You know, the black box that the Americans have buried that contains the secret for how they can constantly reinvent themselves”. We need to find and unlock that black box.

With these words, Jake Sullivan, now the president’s national security adviser, finished an article that can be called a programmatic one, where the word “climate” is mentioned quite often, and Trump is blamed for his decision to withdraw from the Paris Agreement.

The black box is now open.

How Climate Change Is Shaping International Relations
Bread riots, water wars, an influx of climate migrants, growing tensions in the world and the retailoring of the political landscape – all of these are potential consequences of global warming for world politics. Recognition of the importance of climate change and the need to counter it are considered to be the proprieties for politicians in all countries, but political considerations are preventing the formulation of global approaches to this issue. The first part of the Valdai Club’s project “Climate and Politics” describes how the climate agenda is affecting international relations.
Expert Opinions
Views expressed are of individual Members and Contributors, rather than the Club's, unless explicitly stated otherwise.
Tags
Joe Biden
environment
Print
Send by e-mail
Send by e-mail
Add to blog
Add to blog

Concerning Valdai Club’s Activities on Social Media and Online Video Platforms
EU-China Relations and the Future of Multipolarity. What Is Germany’s Choice?

The Fate of Alliances in the Modern World
Is Ukraine an Eastern European Cuba in Reverse?

Related articles
EU-China Relations and the Future of Multipolarity. What Is Germany’s Choice? Follow the link
Expansion of the BRICS and SCO. An Expert Discussion (In Chinese) Follow the link
Syria and the Regional Restructuring Follow the link