Global Corporations and Economy
Expert Opinions
Will Inflation Be Back?
Marek Dabrowski
© Reuters

The most recent inflation data from the US and several other countries signal that consumer prices started to rise. The question remains open whether this is a temporary post-pandemic rebound or the beginning of a more persistent inflationary trend, writes Valdai Club expert Marek Dabrowski.

In the last three decades, inflation which posed a challenge in both advanced (AEs) and emerging-market and developing economies (EMDEs) in the 1970s and 1980s, was on the continuous decline (Figure 1). As a result, it disappeared as a threat and severe risk factor from economic policymaking in many countries. However, dramatic monetary and fiscal policy choices caused by the COVID-19 crisis brought the inflation question back to the agenda. Are we about to witness a reversal of the disinflationary trend in the post-pandemic period, and why? Before answering this unease question, one must correctly identify factors, which help to bring inflation down in a not-so-distant past. 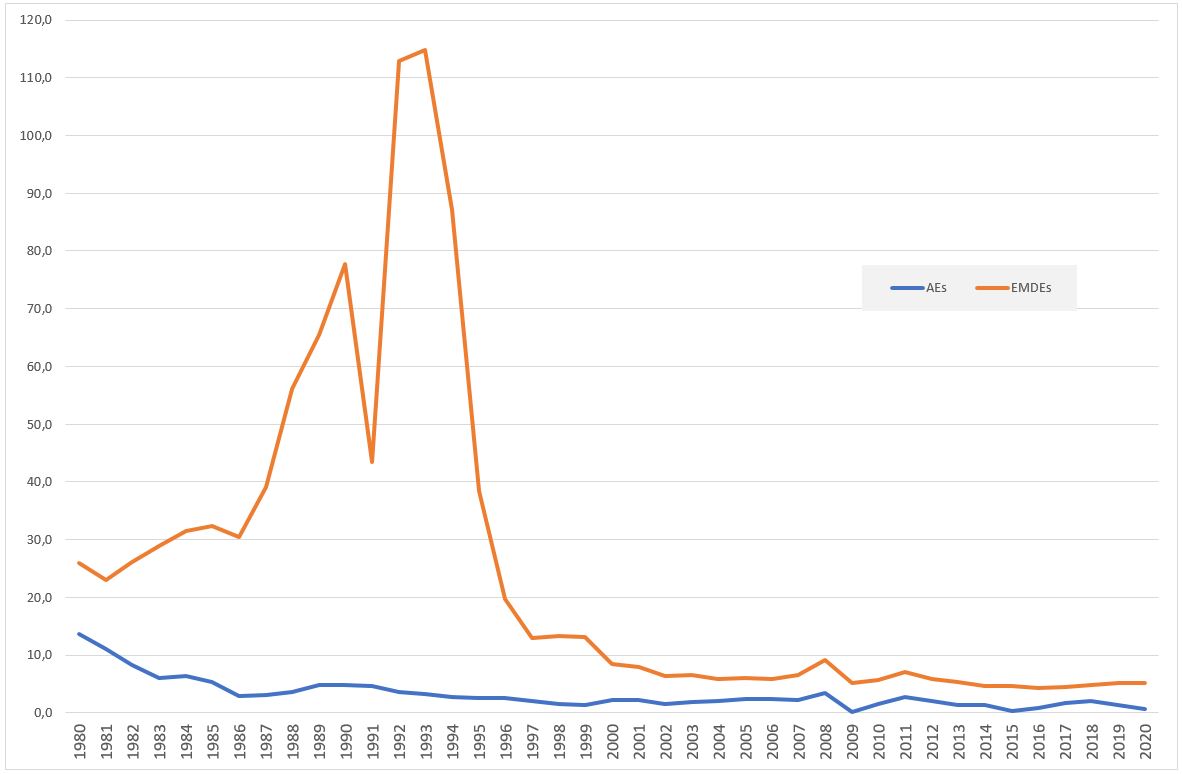 The era of high inflation

The situation in EMDEs was much worse. Apart from the factors present in AEs, one should add populist experiments in both macro and micro policy spheres, economic autarky, excessive public spending, difficulties in state-building, internal and external conflicts, and others. As a result, many countries, especially in Latin America, suffered from very high inflation or hyperinflation.

Factors of the disinflation success before the global financial crisis

Fighting inflation in the United States was initiated by Paul Volcker, the Chair of the Board of Governors of the Federal Reserve System in 1979-1987. It required high interest rates to break down inflationary inertia and cost a temporary recession and higher unemployment. The US disinflation policy was followed by other central banks and governments in AEs and, with some time lag, in EMDEs. While inflation in AEs had been defeated by the mid-1980s, fighting inflation in the developing world took longer, as illustrated by Figure 1. For example, an effective anti-inflationary policy in Central and Eastern Europe and the former Soviet Union became possible only after advancing market transformation in the 1990s.

Fighting inflation succeeded due to changes in monetary policy priorities. Concentration on price stability replaced the earlier priority given to the rate of unemployment and output growth. It was followed by introducing inflation targeting strategies, strengthening central bank independence, and various microeconomic reforms such as deregulation of product and labour markets. In EMDEs, one should add the elimination of chronic fiscal deficits frequently monetized by central banks.

The above diagnosis is correct, but it misses one crucial factor – the role of globalization, which has accelerated since the mid-1980s. It was underpinned by far-reaching trade liberalization, particularly the creation of the World Trade Organization in 1995 and its further enlargement (especially the accession of China in 2001), policy reforms in several emerging-market and developing economies, and a plethora of multilateral and bilateral free trade agreements.

From the monetary policy point of view, globalization has produced downward pressure on the prices of tradeable goods and services and the wages and salaries in tradeable sectors (Rogoff, 2003; Borio, 2014; Goodhart and Pradhan, 2020).

The impact of the global financial crisis

The global financial crisis (GFC) of 2007-2009 produced a deflationary shock in major currency areas such as the US dollar, Euro, or Japanese yen. In the aftermath of the crisis, a far-going disruption in financial intermediation led to a collapse in the money multiplier (Figure 2) and decreasing money velocity (Figure 3). These effects were further magnified by new banking regulations (Basel-3), which increased capital adequacy and liquidity coverage ratios, tightened credit risk assessment methods, introduced countercyclical capital buffers, etc. To fight deflationary pressures in the environment of interest rates close to zero, central banks resorted to large-scale asset purchasing programs (APPs), popularly called quantitative easing (QE). However, the latter has had an additional disintermediation effect. 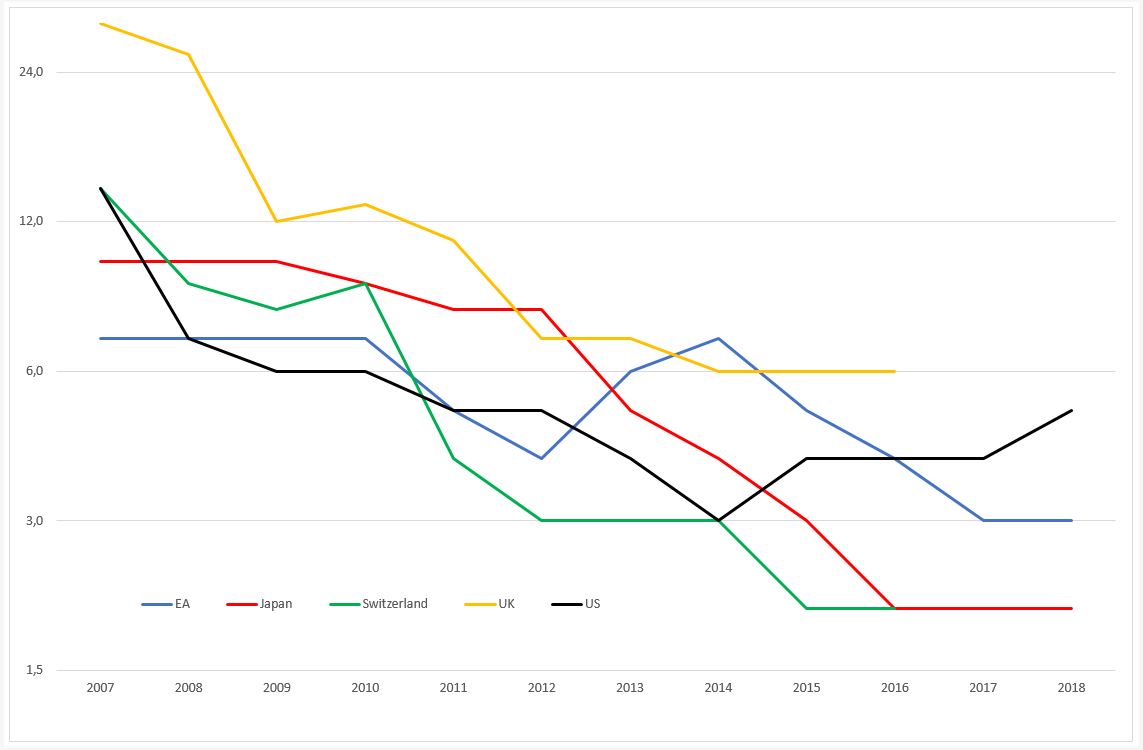 EMDEs currencies reacted to the GFC differently. The demand for them declined as an effect of capital flight and currency substitution (underpinned by a limited trust to them). As a result, international reserves of central banks were depleted, exchange rates depreciated, inflation and interest rates increased. In most EMDEs, it took at least a few years to rebuild confidence in their currencies, bring inflation down again, and stabilize financial markets. 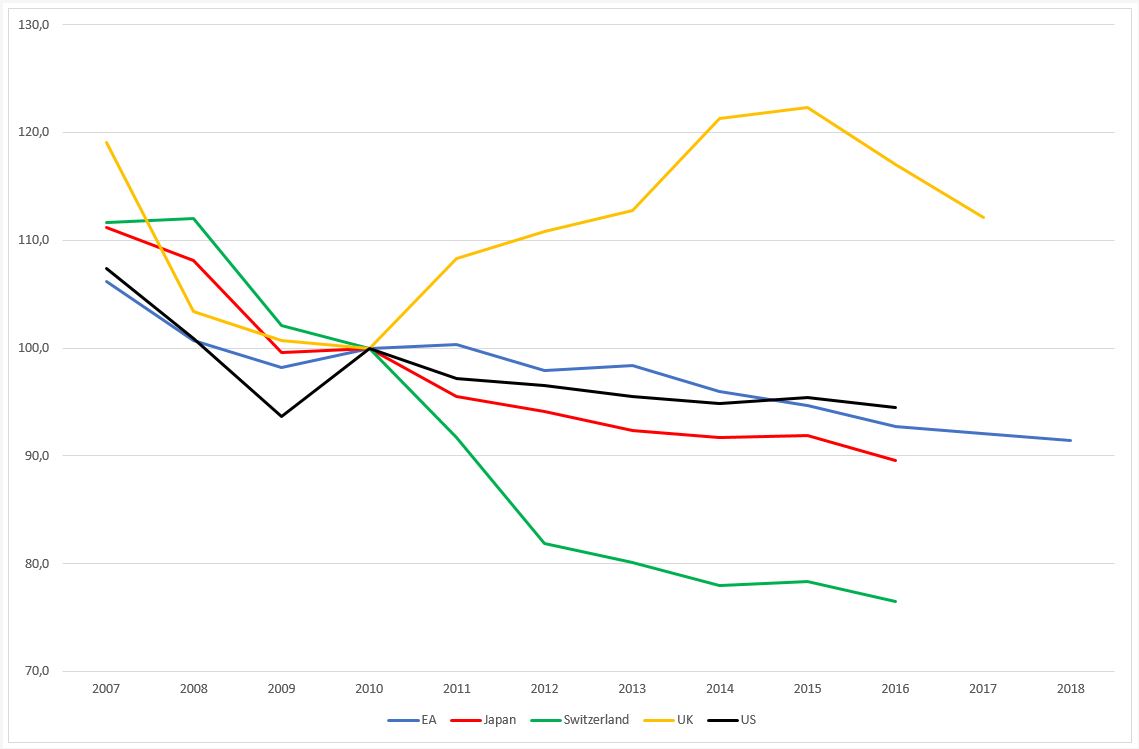 The COVID-19 pandemic produced a new macroeconomic shock but of a different nature from 2007-2009. It is a combination of demand-side and supply-side shocks. It results from depressed aggregate demand caused by the self-restrained behaviour of both consumers and investors and administrative lockdown measures such as the prohibition of certain types of activities, restrictions on the movement of people, or closed borders and the resulting disruption of supply chains. In such circumstances, private spending decreases and private saving increases, but these are forced (involuntary) savings, the phenomenon known from the history of centrally-planned economies.

Despite their different characteristics, central banks in AEs reacted to the COVID-19 crisis similarly as during the GFC. They further relaxed their monetary policies by intensifying APPs. Because fiscal deficits and public debts increased during the pandemic, government bonds became the main assets absorbed by central banks. Many EMDE central banks have also followed this policy course but to a smaller extent than AEs.

What may happen after the pandemic?

In December 2020, inflation was either low or even negative in G20 countries except for Argentina and Turkey (Figure 4) due to the above-mentioned temporary spending constraints (forced saving). Given the 2020 data and extrapolation of past trends, some authors expect that the low inflationary environment will continue for the next couple of years, regardless of monetary and fiscal policy decisions (see, e.g., Blanchard, 2020; Demertzis, 2021). Most forecasts – of the IMF, European Commission, national authorities (including central banks), and commercial institutions – share this optimistic view. 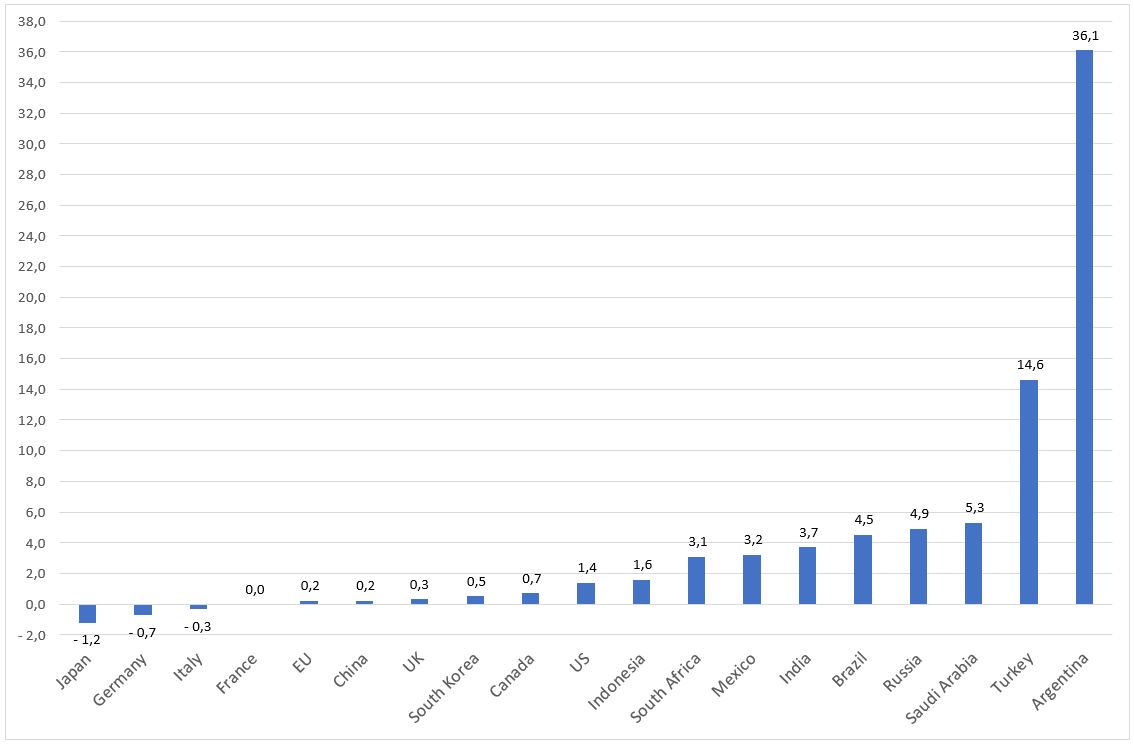 However, optimists seem to overlook several risk factors. In the short term, the most considerable uncertainty relates to the size of monetary overhang (the effect of forced saving) accumulated in 2020 and the speed of its unfreezing. The question is whether the demand for money will return to its pre-pandemic level and, if yes, how quickly. The rapid increase in asset prices (stocks, real estate, and gold) suggests that the hidden (or repressed) inflationary potential is substantial. The recovery of commodity prices to their pre-pandemic levels means that the COVID-19 deflationary shock is essentially over. There are also concerns related to the size of the fiscal stimulus package proposed by the Biden administration and its potential inflationary consequences both for the US and the entire world economy.

From the medium- to long-term perspective, deflationary pressures produced by the GFC (see above) will not continue forever. They have been largely consumed in the previous decade. Second, expansionary monetary and fiscal policies may undermine, and eventually reverse, low-inflationary expectations, which seemed to be well-rooted in the first two decades of the 21st century (Barro, 2021; Rogoff, 2021). If this happens, taming inflation may become more complex and costly as it was in the 1980s. Third, population aging in several AEs and some EMDEs (China and Russia) will have an inflationary impact via increased public spending and lower household saving. Fourth, tensions in the world trade system triggered by Trump's protectionist policies may also produce inflationary consequences if continued (Rogoff, 2021; Borio, 2021). Even if a protectionist scenario is avoided, a continuation of the downward pressure on the prices of tradeable goods and services generated in the previous 30 years by global competition is very unlikely (Bartsch et al., 2020; Goodhart and Pradhan, 2020). Fifth, the rapid deterioration of fiscal balances and the growing public debt may also have an inflationary character (Borio, 2021; Weber, 2021). Furthermore, they constrain monetary policy room for manoeuvre in fighting inflation because of large amounts of government securities accumulated in central banks' portfolios.

The most recent inflation data from the US (4.2% in April 2021) and several other countries such as Turkey, Brazil, India, Russia, Mexico, Poland, Hungary, Iceland, and Norway signal that consumer prices started to rise. The question remains open whether this is a temporary post-pandemic rebound or the beginning of a more persistent inflationary trend.

Global Corporations and Economy
Fighting the COVID-19 Pandemic: Economic Dilemmas and Choices
Marek Dabrowski
Since the beginning of 2020, the entire world is fighting the COVID-19 pandemic. At the end of November 2020 this is an unfinished story and nobody knows when and how exactly this very dramatic threat to human health and life will be defeated. Meanwhile the pandemic has also had serious economic and social consequences.
Expert Opinions

Blanchard, O.J. (2020): Is there deflation or inflation in our future? Vox.EU/ CEPR, 24 April, https://voxeu.org/article/there-deflation-or-inflation-our-future


Views expressed are of individual Members and Contributors, rather than the Club's, unless explicitly stated otherwise.
Tags
inflation
economy
coronavirus
Print
Send by e-mail
Send by e-mail
Add to blog
Add to blog

Valdai Club to Discuss the Chinese Factor in Russia-India Relations
Serbia and Russia: Why Do We Know So Little About Each Other?

The Bolivarian Republic and the United States Empire: Venezuelan Foreign Minister Speaks about the Country's Struggle for Sovereignty
Russia and Serbia: From Historical Memory to Future Relations