While AIs will be able to enhance the flexibility of economies under certain conditions in the event of new pandemics, they certainly won’t serve as a ‘miracle solution’, writes Valdai Club expert Jacques Sapir.

The crisis we are experiencing, centred around the COVID-19 pandemic, has necessitated the discovery of new remedies, and not just medical ones. The health dimension of the crisis implies, in addition to prevention efforts (which are called “social distancing”), medical research into vaccines and treatments. The economic dimension, meanwhile, calls for support measures, both budgetary and monetary, on the part of governments. The social dimension demands that we devote our efforts to the re-socialisation of people faced with the consequences of de-socialisation induced by confinement policies.

Could advances in Artificial Intelligence help end the crisis, or will they make it worse?

The COVID-19 pandemic will be remembered for the formidable array of containment practices which have been implemented in many countries. These practices, which were considered necessary in the face of a virus that was poorly understood (giving rise to the greatest fears), have nevertheless had spectacular consequences in both the economic and social fields.

A study carried out on spring and summer 2020 by IMF experts seeks to correlate the gap between the projected growth announced at the start of the year and the results expected in September amid stringent lockdowns.


Graph 1. Gap between GDP forecast error (before and under the pandemy) and lockdowns stringency 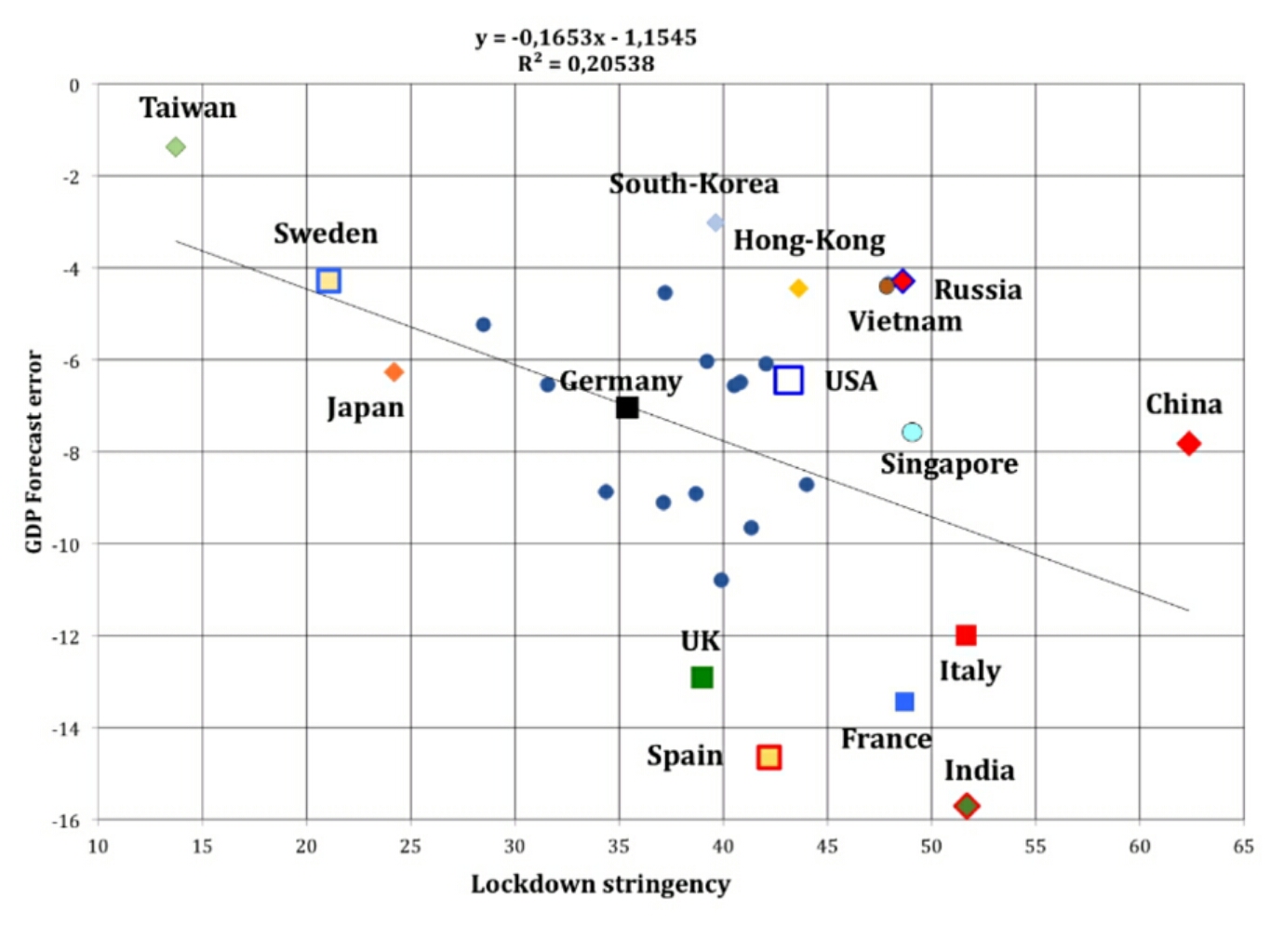 Of course, these findings should be interpreted with some caution, given omitted variables reflecting concerns that affect cross-country analyses and endogenised concerns about lockdowns. These variables (nature of production, weight of services in the GDP, population density), could alter the ultimate result. It must be added that the decision to deploy lockdowns is indeed not random; rather, it may reflect time-independent country characteristics that also affect economic outcomes.

Would it have been possible to lessen the effects of confinement with a production system that relied less directly on human operators and more heavily on Artificial Intelligence? This argument can be made, but a number of objections arise. Let’s imagine an entirely automated factory, as in a science fiction story, directed by an AI. Would this factory be able to adapt to the new conditions without resorting to human operators? This is one of the major questions that arise as to the possibilities of AI.

Without going as far as science fiction, containment has clearly been the occasion for a considerable expansion of remote working or “teleworking”. In this area too, we can think that AIs could provide greater flexibility in a pandemic.

It is clear that the pandemic has sparked an extraordinary enthusiasm for computer tools facilitating remote work.
COVID-19 may not have created remote work, but it undoubtedly helped to spread it. Only 8% of all companies used it before the confinement, and only 3% of employees; this figure was up to 24% during the 1st confinement. Remote work was very favourably received at the time of the 1st confinement, in fact, and in France in particular. Almost ¾ of French people who engaged in it were satisfied. We discovered, or rediscovered, the joys of working from home, in a more relaxed atmosphere. The companies themselves viewed this transformation positively. We were talking about significant productivity gains. Some companies even saw teleworking as an opportunity to reduce their space requirements. After the fantasy of the factory without workers came that of the office businesses without offices.

However, we gradually discovered the disadvantages of teleworking. Working from home is not always easy, especially when you live in a small apartment and/or when you have children. As for companies, they are concerned about a possible loss of control over employees.

First, officials feared, despite intrusive computer systems, that they could not control employees. It is not exactly by chance that “open spaces” have multiplied in offices. Their function is to organize institutional control over the employees.

Afterwards, companies realized that with teleworking, their employees had lost the ability to meet each other, to exchange ideas, and to be able to help each other to carry out their work. In fact, companies have realized that teleworking can also have detrimental consequences on innovation and employee productivity.

In addition, we have become aware of several risks for employees that have appeared with this extension of teleworking.

First of all, there is social and professional isolation, and time management suffers. Teleworking blurs the line between professional and private life, which is potentially damaging for the worker.

Then there is the pressure linked to the objectives, which can no longer be discussed as easily as in the office, pressure which induces stress linked to the nature of the task and the isolation of the worker. These can be coupled with malaise if the company resorts to abusive monitoring measures (using webcams).

Finally, there are the hardware problems related to the worker’s computer equipment, its connection, and of course conditions under which he or she works at home. It is clear that these conditions have a lot of impact on how people feel about working from home.

However, the most serious risks are those which weigh on the mental health of employees, and which very often have direct consequences on their physical health. Thus, in addition to the problem of isolating vulnerable people, or the overlap between private and professional life, there is also the rise of tensions within teams. This is a direct consequence of the lack of contact between people. As we know, communication by screen favours the rise of conflicts, a phenomenon that any user of social networks can confirm.

It’s Dangerous to Normalise the Panic: Why Irrationality Is a Bigger Enemy Than Coronavirus
Kancho Stoychev
There is no doubt that COVID-19 is a danger and requires serious actions which by the way are taken. But we should realize that the bigger danger and enemy is the irrationality which we humans carry in our genes by origin. Its normal to panic in front of a danger but it’s dangerous to normalize the panic.
Expert Opinions

In France, for example, a study by Syndex, a firm specialising in labour relations in the company, carried out a survey of 700 employee representatives in September 2020 which showed that the majority of them felt that the crisis and remote work had amplified psychosocial risks in their business.

There is also a risk of a rise in addictions of all kinds. In the spring, a study by GAE Conseil warned about the increasing consumption of alcohol, cigarettes and food during the “stay at home” period. Three factors were identified: anxiety related to the epidemic (50%), loss of bearings and change of habits (55%), and boredom (60%). These phenomena have greatly increased with the second wave of lockdowns. It is actually easier at home to light a cigarette than when you have to go out on the sidewalk at the office, let alone have a few drinks or use cannabis. We must link to this the frightening rise in France of the consumption of psychotropic drugs that we have seen in recent weeks. This rise is not surprising, moreover, as nearly 20% of the population suffers from symptoms of depression.

All this has a name: it is the de-socialization of people using remote work, because — and we tend to forget it — work, not only as an activity but as a place where we meet, is also a major place for the socialisation of individuals.

While AIs will therefore be able to enhance the flexibility of economies under certain conditions in the event of new pandemics, they certainly won’t serve as a ‘miracle solution’ in this respect.

AI in International Relations: The Era of ‘Digital Diplomacy’
Yaroslav Lissovolik
In view of the sorry conditions that the world’s international relations find themselves today, some argue that there may be a case for an upgrade in international diplomacy, perhaps with elements of higher technology in establishing cross-country communication lines. One such area where a technological upgrade is already progressing is the use of AI in international diplomacy.
Expert Opinions
Views expressed are of individual Members and Contributors, rather than the Club's, unless explicitly stated otherwise.
Tags
artificial intelligence
Print
Send by e-mail
Send by e-mail
Add to blog
Add to blog

Vladimir Putin Meets with Members of the Valdai Discussion Club. Transcript of the Plenary Session of the 18th Annual Meeting
Is a Large-Scale Influx of Refugees From Afghanistan to Russia Possible?

Urbs et Orbis. Urban Civilisation in Russia and How It Affects the Country’s Development
Origins and Challenges of Putin’s Conservative Strategy

Related articles
Ethics as Applied Intelligence Follow the link
Photo Gallery: The Future of Outer Space in International Politics: Challenges and Opportunities for Cooperation Between Russia and Argentina. An Expert Discussion Follow the link
Is a Large-Scale Influx of Refugees From Afghanistan to Russia Possible? Follow the link