Global Corporations and Economy
Expert Opinions
The Specter of Rising Market Concentration
Yaroslav Lissovolik
© 2021 Richard Drew/AP
The rise in market concentration may be a longer term challenge for the global economy, given that some of the drivers of these trends involve structural transformations. In particular, the green transformation and the rising importance of ESG may favour the larger companies that are more in a position to stomach the higher costs associated with such changes, writes Valdai Club Programme Director Yaroslav Lissovolik.

The rise in economic inequality has widely been termed in the past several years as the key factors contributing to the vulnerabilities of the global economy. But while most of the attention with respect to inequality has centered on the rising income differentials of households, there is also an important sectoral and corporate dimension with regard to the uneven and unbalanced development of the global economy. In particular, one of the implications of the pandemic in 2020 has been a marked rise in the level of market concentration across multiple sectors of the global economy. The trend of rising market concentration may pose longer term risks of lower competitive impulses and higher inflationary pressures.

Recent IMF research points to a rise in the key indicators of market power — such as the concentration of revenues among the biggest players in a sector. The pandemic appears to have exacerbated these trends — the Fund estimates that “this concentration could now increase in advanced economies by at least as much as it did in the fifteen years to end of 2015. Even in those industries that benefited from the crisis, such as the digital sector, dominant players are among the biggest winners”. 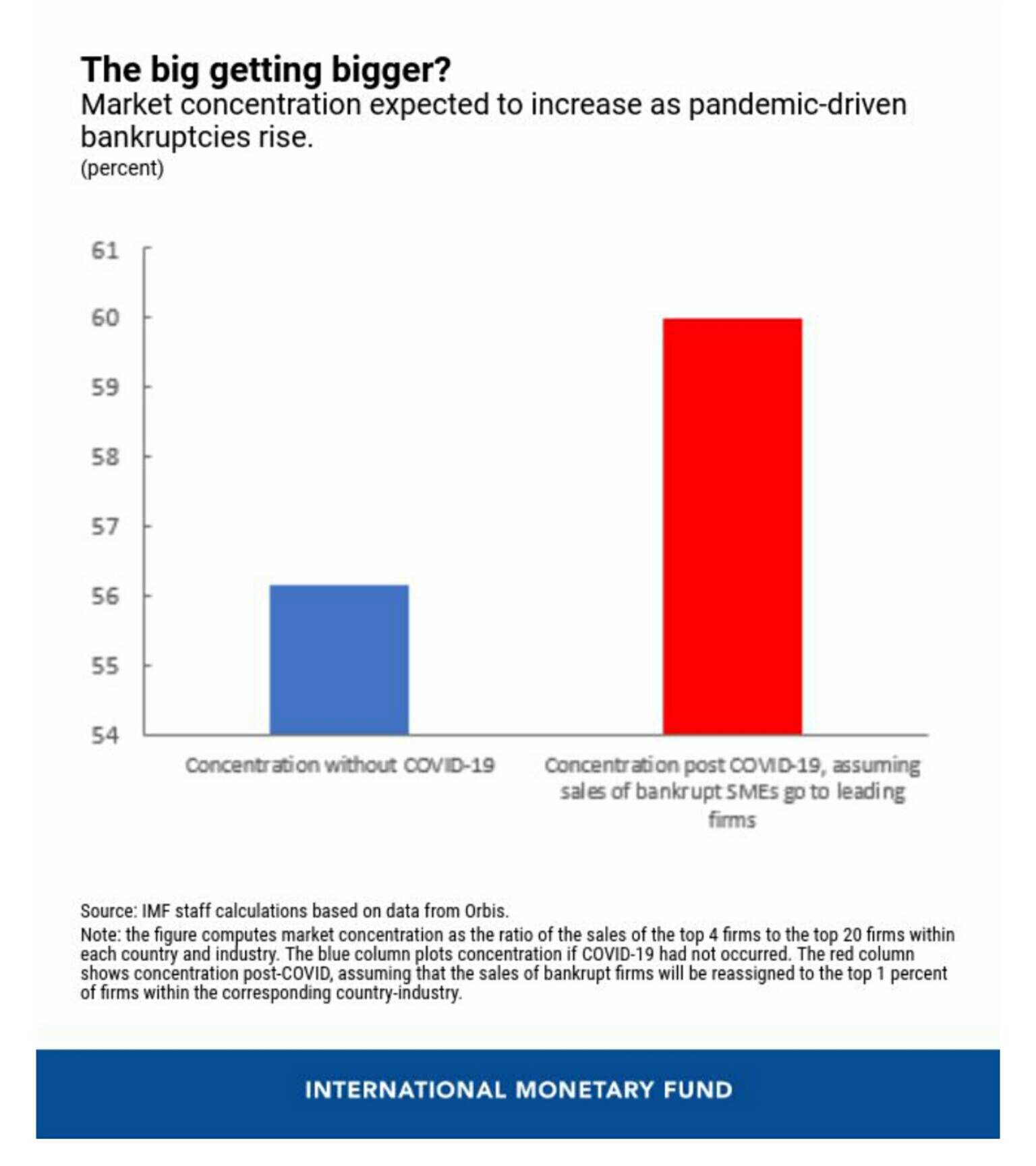 At the same time, the IMF notes that the increase in market power has been a long-term trend spanning decades — in particular, “global price markups have risen by more than 30 percent, on average, across listed firms in advanced economies since 1980. And in the past 20 years, markup increases in the digital sector have been twice as steep as economy-wide increases”.

Even more important is the fact that the rising market power of the leading firms is becoming entrenched. Across different sectors, the IMF estimates that corporates with the highest markups have an almost 85 percent chance of remaining a high-markup firm the following year, which is 10 percentage points higher than during the “New Economy” era of the 1990s. The rise of the digital platforms is accentuating the rising concentration trend on the back of the network effects, economies of scale and more recently the effects of the pandemic.

Global Corporations and Economy
Leaving the Year of the Pandemic Behind: A Look Ahead to 2021
Yaroslav Lissovolik
Given how prominent the “black swan” factor was in 2020 with the raging Covid pandemic, there is every reason to keep an eye open for possible unexpected events in the year 2021. The good news is that while there may be more “black swans” to watch out for, the awareness and preparedness of the global economy may result in a stronger immune response, writes Yaroslav Lissovolik, Programme Director of the Valdai Discussion Club
Expert Opinions


In Russia the trend towards greater market concentration has also been observed in recent periods, most notably in the consumer sector. In the course of 2020 the share of the five leading food retailers increased by nearly 4 percentage points to reach more than 32%. In spite of the notable rise in market concentration, there is ample room for further expansion in the share of the largest food retailers as the corresponding concentration levels in Germany and the Czech republic stand at 74%, in Poland and the UK at 60-61% and 47% in France.

The potential for further increases in concentration in Russia’s retail sector emanates from high transportation costs and logistical, as well as a relatively weak position of small and medium-sized firms, particularly during crisis periods. Indeed, during the previous waves of economic crisis the regional retail chains tended to cede positions to the large federal players. The rising maturity of the market structure, in particular the greater role of the modern hypermarket/supermarket format, also serves to increase the levels of concentration in the food retail industry. The online format, which became particularly dynamic during the pandemic, requires significant financial resources and investments, which again favours the largest players. Finally, the economies of scale tend to be especially pronounced among the larger players as a wider network of suppliers allows for more favourable conditions, which in turn leaves more scope to offer discounts.

The key driver behind the rising concentration in the retail sector in recent periods have been mergers and acquisitions undertaken by the leading players. Earlier this year Magnit acquired Dixy (convenience store chain), thus bridging the gap with X5 in terms of the scale of the retail network. For its part Lenta acquired Billa in the Moscow region, while also expanding in the regions via acquiring a retail food chain in Perm krai. Lenta is positioning to develop the online format, which has become an important competitive factor in the retail sector.

In conclusion, the rise in market concentration may be a longer term challenge for the global economy, given that some of the drivers of these trends involve structural transformations. In particular, the green transformation and the rising importance of ESG may favour the larger companies that are more in a position to stomach the higher costs associated with such changes. In the near term factors such as renewed waves of the pandemic crisis, as well as rising labour shortages and wage inflation may put smaller companies at a disadvantage. Lastly, in the post-pandemic world the withdrawal of stimulus and rising interest rates may prove to be more of a burden for the smaller companies in view of their greater susceptibility to high levels of indebtedness.

Global Corporations and Economy
Inflation Staging a Comeback
Yaroslav Lissovolik
The multiplicity of factors serving to build up inflationary pressures in the current market conditions is daunting. Inflationary expectations are on the rise and approaching multi-year levels in Russia and abroad, writes Valdai Club Programme Director Yaroslav Lissovolik.
Expert Opinions
Views expressed are of individual Members and Contributors, rather than the Club's, unless explicitly stated otherwise.
Tags
economy
Print
Send by e-mail
Send by e-mail
Add to blog
Add to blog

Green Transformation as an Economic Policy Tool
Digital Non-Alignment: How to Avoid Bipolarity in the Digital World

Digitised Realpolitik: Sovereignty, Alliances and Non-Alignment in the 21st Century
Central Asia: Strategic Partnership Is Not a Propaganda Cliché