Harnessing continental distance for the developing economies may be the single most important mission for BRICS and the New Development Bank (NDB) in the coming decades. The BRICS+ framework offers a platform to scale up investment cooperation through bringing on board the regional development institutions in which BRICS countries are members.

There have been numerous attempts to bring all BRICS under one common denominator — a common feature that would explain the rationale for the emergence of such a grouping. Among the many common factors for BRICS countries the more popular was the growth potential, with predictions of a rising share for BRICS in the world economy being prevalent in the initial phases of BRICS evolution. Another vision was that the BRICS economies represent the leading emerging markets (EM) with some of the most liquid assets and sizeable markets in the EM universe. But over and above some of these unifying themes, there appears to be a less explored commonality among BRICS related to their geographical peculiarities. In fact, geography in terms of the size of BRICS economies, the distance that separates them and the regional roles of BRICS in their respective continental neighborhoods appears to be one of the most fundamental and long-term themes that determines the pathways of BRICS future cooperation.


In terms of the centrality of geography as a defining and unifying feature of BRICS there is the simple fact that BRICS are among the largest countries by territory in the world. In particular, Russia is the largest country with a landmass of more than 17 million squared kilometers, with China taking the 3rd position, Brazil and India taking the 5th and 7th spot respectively. Furthermore, the top three spots in the world in terms of the number of countries that border the respective economies are taken by BRICS economies — China and Russia hold the number one spot with 14 border countries, while Brazil and India take the #3-4 ranking with 10 border countries each. Four BRICS economies also take the top 4 positions in the world in terms of the length of the border with neighboring economies. The number one spot is taken by China, followed by Russia and then Brazil and India.

Another way to picture the uniqueness of BRICS geography is the sheer distance that separates its members. If the distance were to be measured on the basis of the separation between the respective capitals, then the greatest distance among the two BRICS economies would be between Brazil and China — nearly 17000 km. The distance between Russia and Brazil is nearly 11700 km. These distances are several times higher than the longest separations of capitals within the EU (Warsaw-Lisbon separation is 2760 km) and still notably greater than the most extreme spatial separations in the developed world (London-Canberra is 10545 km and the New York — Canberra route is just over 10000 km). 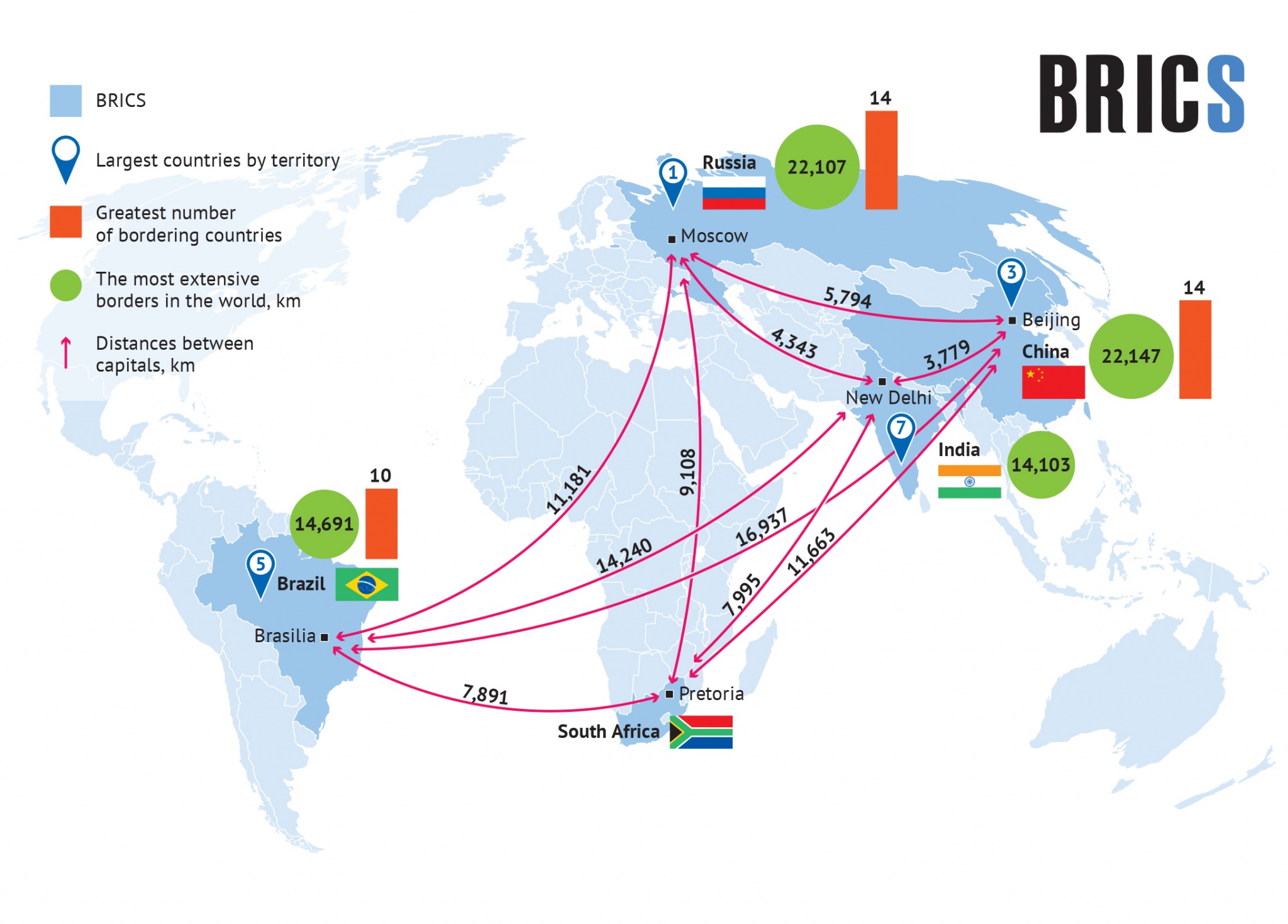 What do all these geographical factors mean for the vectors of economic cooperation among BRICS? The unprecedented spatial separation means that the intensity of trade among the BRICS economies will be limited by the gravity of distance (in line with the indications of the “gravity model” of international trade — the greater the distance and the smaller the size of the two economies, the less will be the intensity of bilateral trade). But at the same time there is tremendous scope for connectivity projects in view of the size of the BRICS countries and the needs for transportation connectivity in the regions of BRICS presence, most notably with respect to the land-locked countries.

The scope for connectivity projects for BRICS economies may be magnified to the scale of the landmass of the developing world via the BRICS+ platform uniting Africa, Latin America as well as Asia. This BRICS+ platform represents a formidable land mass that is significantly less connected via transportation compared to the part of territory occupied by the developed world. If in the case of BRICS+ the total land mass is nearly 100 million squared kilometers, in the case of the developed economies this is around a third of the land mass of the BRICS+ countries.

Harnessing continental distance for the developing economies may be the single most important mission for BRICS and the New Development Bank (NDB) in the coming decades. The BRICS+ framework offers a platform to scale up investment cooperation through bringing on board the regional development institutions in which BRICS countries are members. Accordingly, regional development banks, regional financing organizations together with NDB can act in concert in advancing sustainable development and connectivity across the Global South.


In sum, the two dimensions of BRICS geography, namely the intra-continental and the inter-continental expanses of the developing world, determine the pathways for future BRICS cooperation. The enormous intra-continental distances for BRICS can become an asset and an opportunity-set for advancing South-South cooperation through connectivity projects. At the same time, the scale of inter-continental divides points to the need to advance towards a Global South FTA, a project that is increasingly expedient given the rising tide of protectionism in the world economy.

BRICS Plus: What to Expect from the Bloc's Expansion
BRICS Plus is a continuation of the BRICS concept
Infographics
Views expressed are of individual Members and Contributors, rather than the Club's, unless explicitly stated otherwise.
Tags
BRICS
economy
Global South
Print
Send by e-mail
Send by e-mail
Add to blog
Add to blog

China and Europe: What Was It? The Rise and Crumbling of the ‘16+1’ Format
Russia and South Africa: From Political Understanding to Practical Cooperation