There is a growing realization of longer-term looming vulnerabilities for the global economy, a significant part of which have to do with high-technology and human capital-related sectors. As opposed to “black swans” and the “known unknowns” such as climate change, those fragilities that pertain to human capital development are at least more tractable and amenable to attenuation/moderation via concerted economic policies and strategies geared towards longer term exigencies of sustainability, writes Valdai Club Programme Director Yaroslav Lissovolik.

The shock of the pandemic is changing the ways in which we think about the world and in which we analyze the future trajectories of development. The persistence of the Covid pandemic will likely accentuate this transformation and the prominence of the “green agenda” this year is just one of the facets of these changes. Market research as well as the numerous think-tanks will be accordingly re-calibrating the time horizons and the main themes of analysis. Greater attention to longer risks and fragilities is likely to take on greater prominence, with particular scrutiny being accorded to high-impact risk factors that have a non-negligible probability of materializing in the medium- to long-term. Apart from the risks of global warming other key risk factors involve the rising labour shortages, most notably in areas pertaining to human capital development.

The impact of the Covid pandemic on the labour market will have long-term implications, with “hysteresis effects” observed in both highly skilled and low-income tiers of the labour market. One of the most significant factors affecting the global labour market was the reduction in migration flows, which resulted in the exacerbation of labour shortages across the major migrant recipient countries, such as Russia. There was also a notable blow delivered by the pandemic to the spheres of human capital development such as education and healthcare, which in turn exacerbated the imbalances and shortages in these areas. In particular, according to the estimates of the World Health Organization (WHO) shortages can mount up to 9.9 million physicians, nurses and midwives globally by 2030.

In Europe, although the number of physicians and nurses has increased in general in the region by approximately 10% over the past 10 years, this increase appears to be insufficient to cover the needs of ageing populations. At the same time the WHO points to sizeable inequalities in the availability of physicians and nurses between countries, whereby there are 5 times more doctors in some countries than in others. The situation with regard to nurses is even more acute, as data show that some countries have 9 times fewer nurses than others.

In the US substantial labour shortages in the healthcare sector are also expected, with anti-crisis measures falling short of substantially reversing the ailments in the national healthcare system. In particular, data published by the AAMC (Association of American Medical Colleges), suggests that the United States could see an estimated shortage of between 37,800 and 124,000 physicians by 2034, including shortfalls in both primary and specialty care.

The blows sustained by global education from the pandemic were no less formidable. These affected first and foremost the youngest generation of the globe – according to UNESCO, “more than 1.5 billion students and youth across the planet are or have been affected by school and university closures due to the COVID-19 pandemic”. On top of the adverse effects on the younger generation (see Box 1), there is also the widening “teachers gap”, namely a worldwide shortage of well-trained teachers. According to the UNESCO Institute for Statistics (UIS), “69 million teachers must be recruited to achieve universal primary and secondary education by 2030”.

Box 1: The UN list of the adverse impact of the pandemic on education 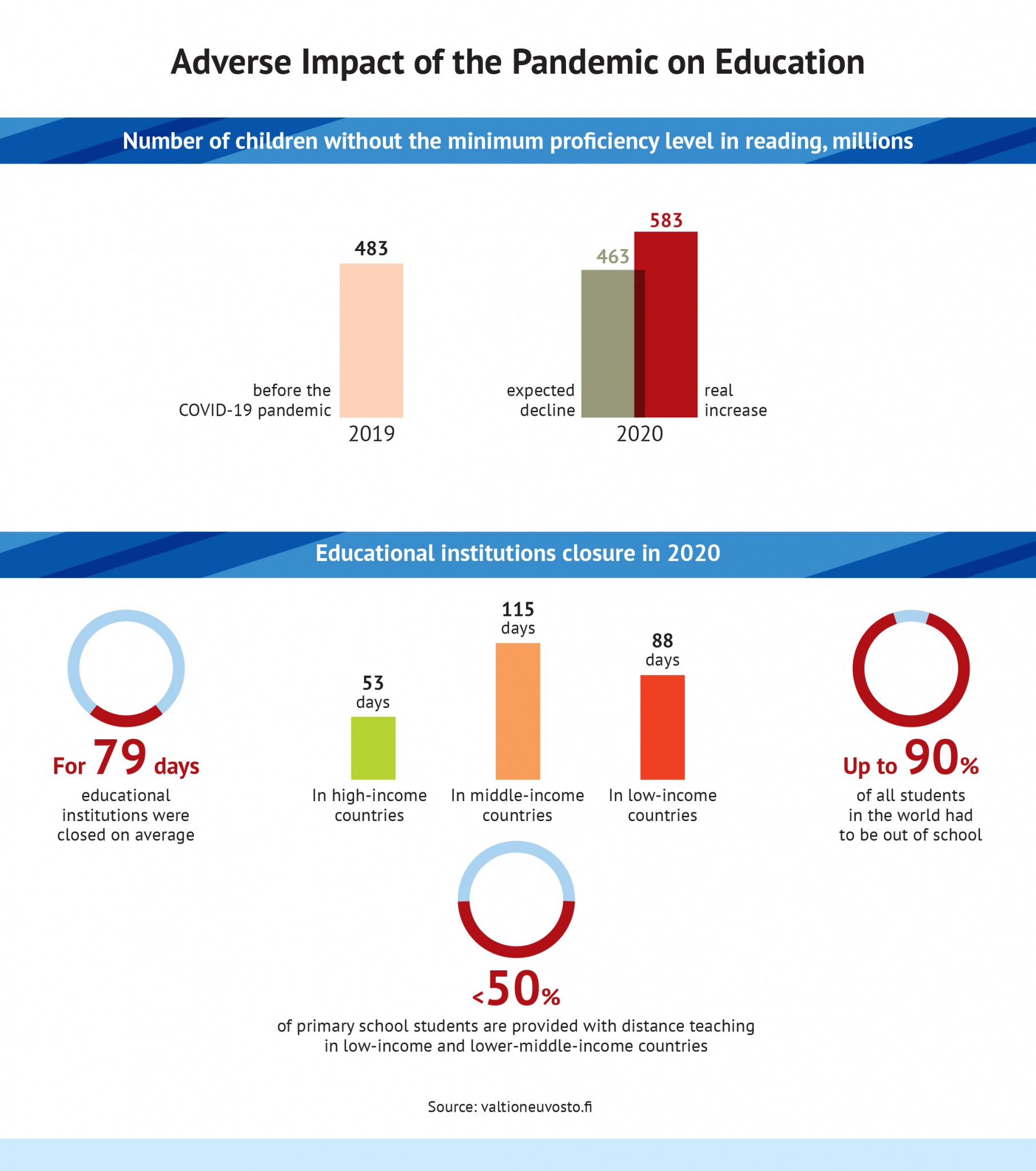 Apart from the broader vulnerabilities for the world economy emanating from the depreciation of “human capital”, the skill shortage is a major factor that may increase the probability of key long-term risks. These may pertain to areas such as the lack of connectivity and infrastructure development, energy/electricity disruptions and cybersecurity.

Barriers to connectivity and distance are becoming perhaps even more challenging amid the pandemic and rampant protectionism. Investment needs are effectively rising beyond the already sizeable infrastructure gaps. The Global Infrastructure Hub forecasts a global infrastructure gap of $15 trillion by 2040, representing 16% of total needs. These gaps in the global connectivity network may further accentuate the vulnerabilities associated with disruptions in the global and regional value chains.

In cybersecurity, according to a 2020 survey by (ISC), there are 879,000 cybersecurity professionals in the US workforce and a need for another 359,000 workers, while globally the shortages are even larger at more than 3.1 million unfilled positions. Furthermore, “the US Bureau of Labor Statistics projects "information security analyst" to be the 10th fastest growing occupation over the next decade, with an employment growth rate of 31% compared to the 4% average growth rate for all occupations”.

In the end, there is a growing realization of longer-term looming vulnerabilities for the global economy, a significant part of which have to do with high-technology and human capital-related sectors. Some of these risks may well exhibit the “high impact/non-negligible probability” features that were highlighted for global risks such as climate change. As opposed to “black swans” and the “known unknowns” such as climate change, those fragilities that pertain to human capital development are at least more tractable and amenable to attenuation/moderation via concerted economic policies and strategies geared towards longer term exigencies of sustainability.

How to Break the Impasse Between Russia and the West
Building Resilience for Peace: Andrey Bystritskiy at 2021 DMZ International Forum on the Peace Economy

The Belt Without a Road: Difficulties With the Transport Component of Russian-Chinese Cooperation in the Far East
War Between Russia and Ukraine: A Basic Scenario?

Wither Capitalism?
The Enlargement of the European Union to the Balkan Countrie: An Opportunity for a Great Plan Between Russia and Europe