In the history of mankind migrations always played a very important role. So it was in ancient times, when a man came out of one part of the world and settled across the globe. So it was in the Middle Ages, when the so-called Voelkerwanderung re-designed the ethnic, linguistic and political map of Europe. So it was in the very recent past, when the intercontinental migrations led to the creation of the United States and other overseas centers inhabited by immigrants from Europe.

It would be naive to think that now we see the "end of history" and the migration mechanism of redistribution of the population over the planet has ceased to function. Quite on the contrary. The global demographic situation to date is fraught with the rise of migratory movements with unprecedented proportions. The high probability of such a development emerges from a huge growth of the population of the "Third World" and the resulting asymmetry of the population masses distribution over the planet, from the rapid growth of population mobility. Only recently peasant societies had limited mobility.

Now most political and even scientific debates related to migration issues are characterized by underestimation of migratory pressures from the developing world as one of the determining factors of the 21st century global agenda. Almost all the attention is focused on the analysis of the situation and the elaboration of policies based on the interests of the host countries: whether they need migrants, if needed, how much, what quality, what means are required to regulate migration flows, etc. Certainly, all such estimates are necessary, but their value is limited because the migration is a two-way process, and real processes depend not only on what is considered useful or harmful to the host countries, but also on what happens in the countries which are left by migrants. This is the main lesson of the so-called "migration crisis" of 2015, related to the events in Syria.

Syria is a small country, its population (less than 20 million) amounts half of Iraq's population and is 4 times less than the population of Turkey. Nevertheless, even the events in this relatively small country gave rise to massive refugee outflows, which led to talk about the "European migration crisis" (in fact, the Syrian contribution was only the most visible, the flow of refugees came from other countries with internal conflicts - Afghanistan, Iraq, Africa). As long as these flows have arisen, they have created a serious challenge, and it is certainly not the last challenge of this kind. We can not exclude in the not too distant future internal conflicts for some other reasons (for instance, the environmental one), which can generate migrant flows from much more populous countries. The associated risks, even the possibility of armed interventions, are not discussed, and emerging crises each time seem surprising.

Not only the risks are underestimated, but also new opportunities, which international migrations bring. The assessment of risks and benefits balance is neglected. This is evident in the example of Russia.

Russia is the Eurasian power, three-quarters of its territory lie in Asia. The population of the whole of Asia now is about 4.5 billion people and continues to grow. In the Russian Asia (35% of the whole territory of Asia) at least 30 million people live. Our usual discussions about the migration in Russia do not consider this aspect of the geopolitical reality. They have no strategic depth, are concentrated on the short-term problems of the labor market, labor migration, its illegal components, etc. Is it correct? Should we think of migration as an important source of replenishment of limited demographic resources of Russia and the method to make the amount of its population more in line with its vast territory? In this case, we should at first find an acceptable risks and benefits balance. 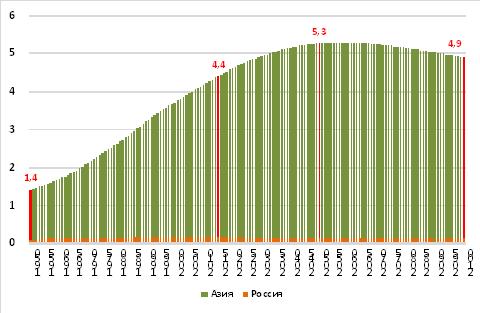 Population of Russia and Asia - actual data and UN forecast until the end of the 21st century, billion people


Anatoly Vishnevsky is Director of the Institute of Demography, National Research University Higher School of Economics

New Aspects of Space Law: The Artemis Accords
Valdai Club to Discuss the Policy of the New Eurasian States

Russia-West: How Can We Fix ‘the Most Fateful Error in the Entire Post-Cold War Era’?
Towards the New World Order Through Crisis: Forecast for 2022