Expert Opinions
Globalization on the Brink : Are We on the Verge of Major Transformation of the Global Economy ?
Jacques Sapir
© 2020 Richard Drew/AP

Movements to a de-globalization or "demondialization" of the economy, announced in a 2010 book, referred to various authors. This phenomenon has been widely observed. It is also accompanied by a "de-westernization" of the world. These various phenomena are not only economic; they all have a political dimension as well as a cultural dimension. However, this text will focus mainly on the economic dimensions of these movements.

The change in balance of power

This change in the balance of power is manifested in what has been called the "emergence process". At the outset, it was the emergence of financial markets. So the anagram "BRIC" originally came from a Goldman-Sachs report. Then by "emergence" we wanted to take into account the phenomenon of industrialization or re-industrialization, which affected many countries. This process results in an increase in the share in world GDP of certain economies. 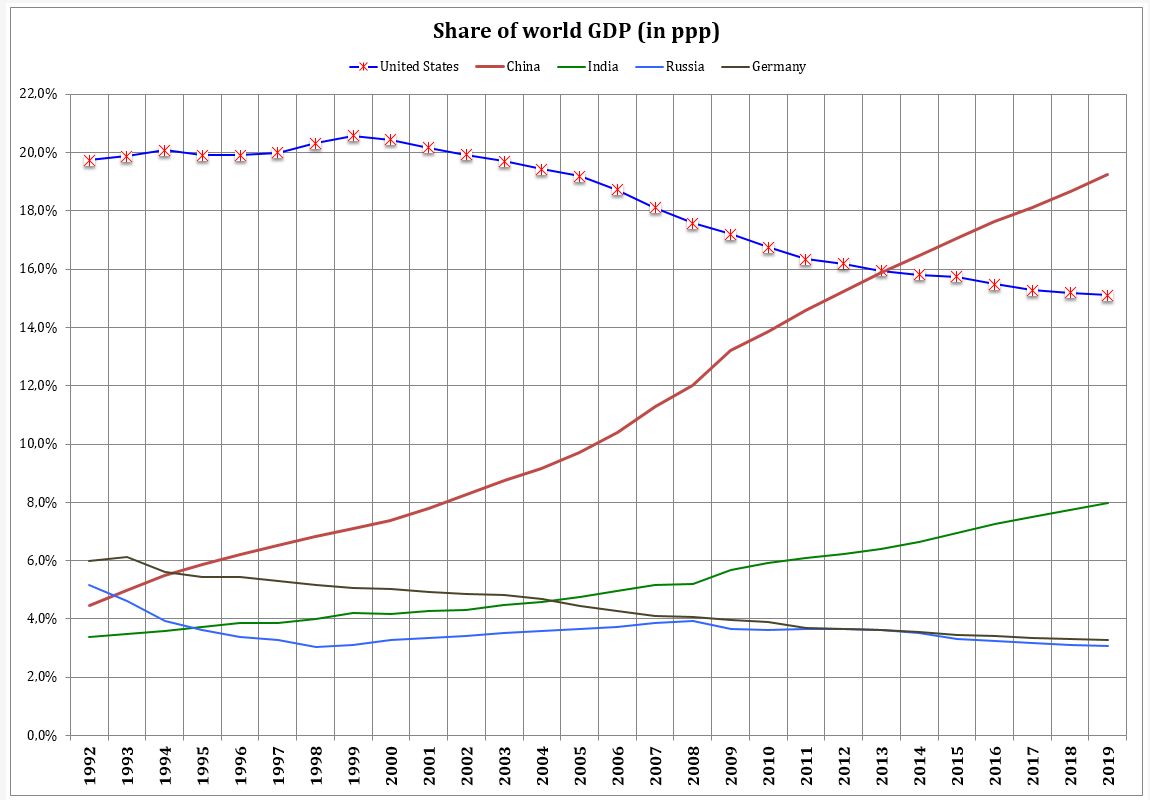 We can see in graph 1 that the share of world GDP realized by the United States has started to fall sharply since 2000. The United States share of world GDP has then been exceeded by that of China since 2013. Less spectacular, but all also significant is the rise of the Indian economy which grew slowly from 1992 to 2002 (3.6% to 4.4%), but much faster afterwards, since it reached, in 2019, around 8% of the Global GDP. Conversely, we can see that Germany’s share in world GDP is decreasing, while its trade surplus is increasing.

Of course, GDP is just one indicator among many. With the development of the knowledge economy the relevance of intellectual property has considerably increased. Evolution of balance of power here can be assessed through the number of patents registered. It is then extremely relevant to note that here too China has done more than catch up with the United States and Japan. 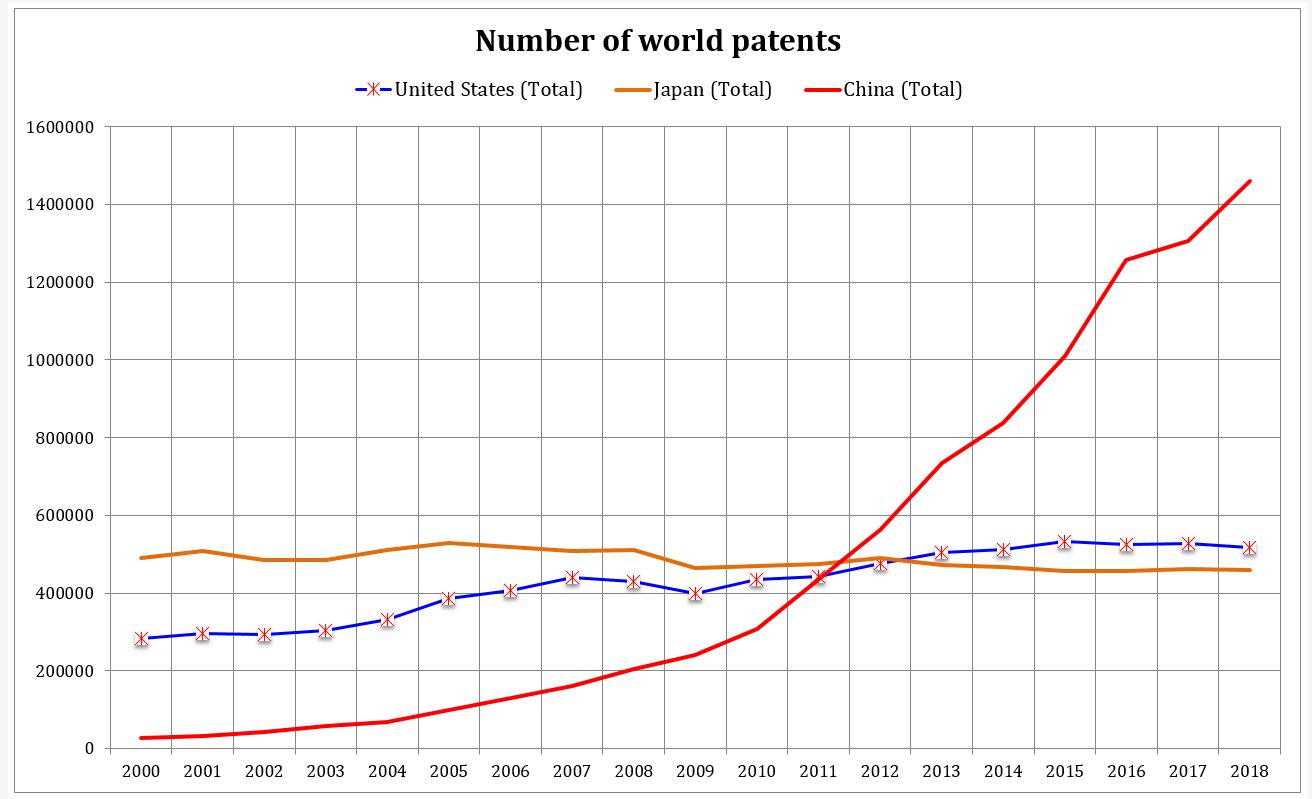 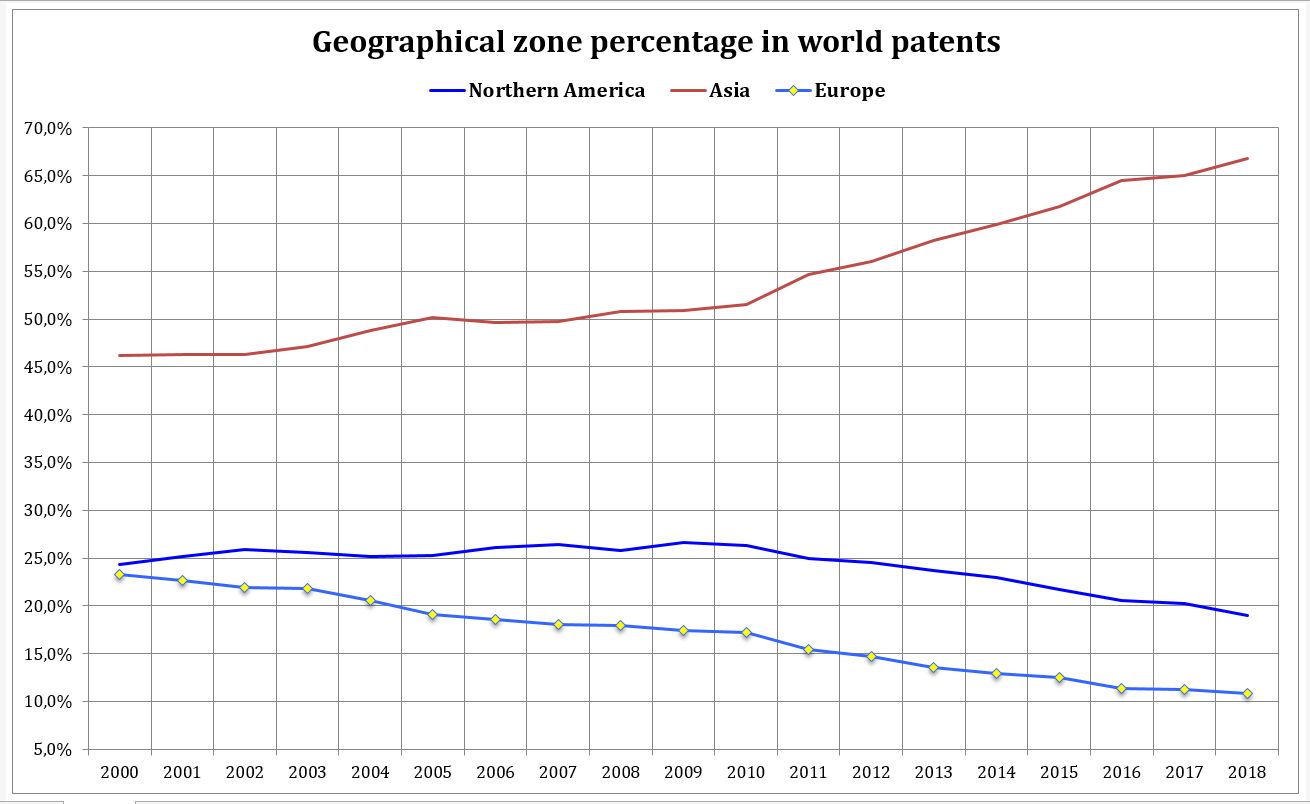 Very clearly, we are witnessing today a process of "de-westernization" of the world economy. Even if all patents are not equally significant, the rise of Asia’s share in the registration process is clear an indication that the innovation process has moved from West to East.

Around United States a group of countries was initially formed in the 1970’ to deal with monetary issues. This group, the G-5 which became the G-7, saw its agendas develop rapidly in the 1990s and the 2000s. It integrated, for a few years, Russia before the latter was expelled from it. the aftermath of the Ukrainian crisis and the annexation of Crimea to Russia. But in the 2000s and 2010s, another group of countries was formed, the so-called BRICs and then the BRICS. 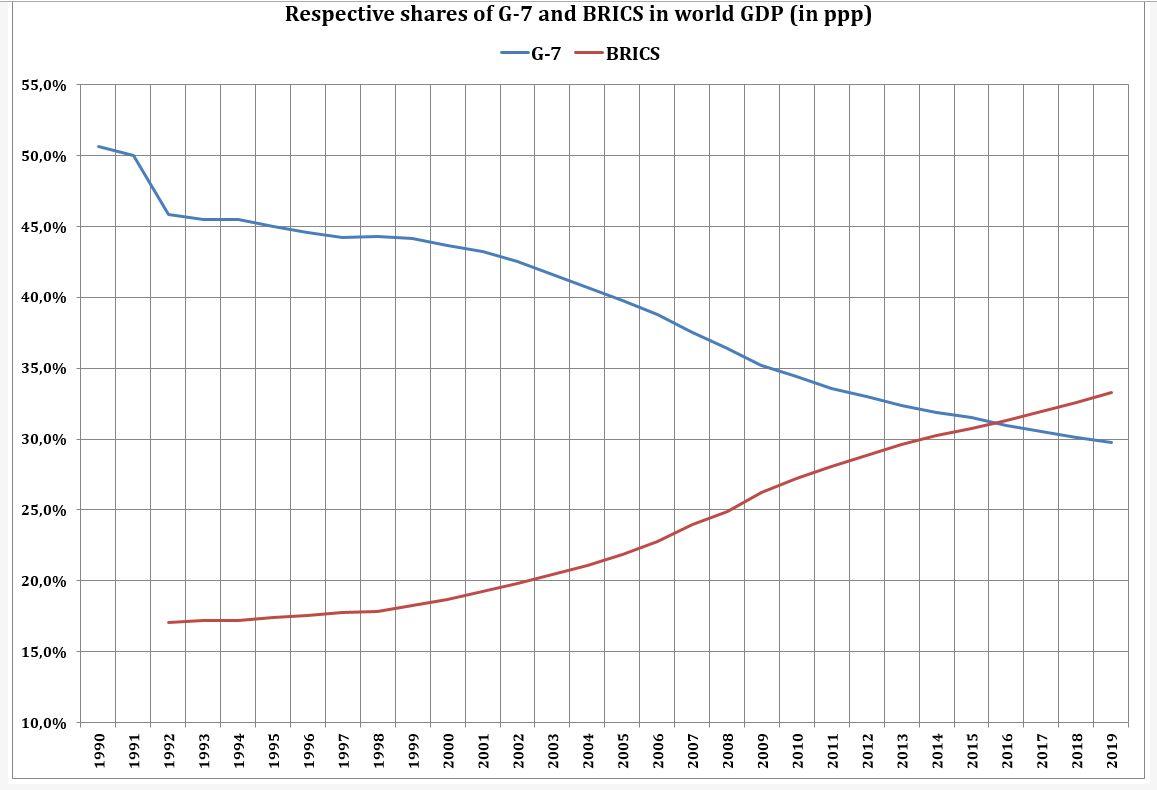 When the BRICs are formed, they still weigh only 20% of world GDP, while the United States is roughly at the same level, and the group of G-7 countries is around 43% (Chart 4). In the years that follow, however, this balance of forces will change rapidly. The BRICs then BRICS now represent almost 35% of world GDP, when the G-7 group fell to 30%.

The BRIC group, to which the Republic of South Africa has joined, has also established joint institutions, such as a development bank. Can the shift in the balance of power be attributed to the rise of the Chinese economy? Naturally the latter played an important role. But, if we remove China from the BRICS and the United States from the G-7, we find the same dynamics. Of course, the movement is less spectacular. However, the fall of the G-7 without the United States is as impressive as that of the G-7 with the United States. 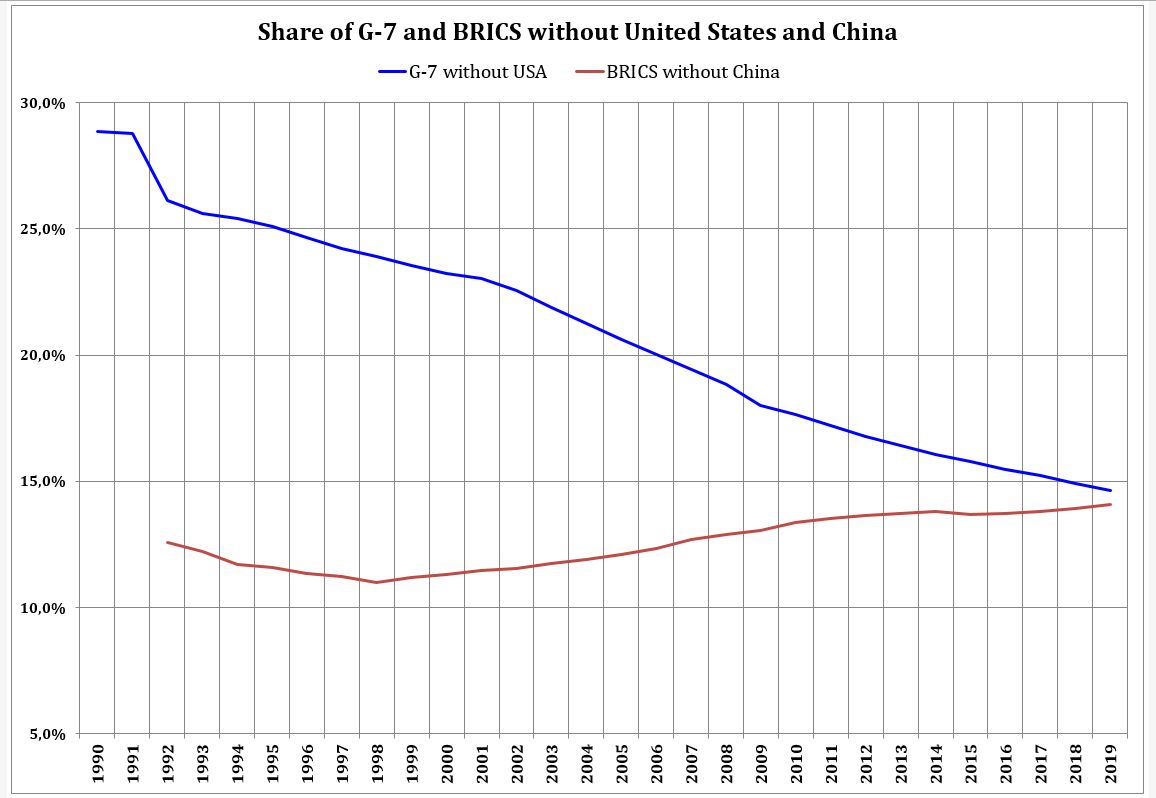 We have been witnessing, for the past ten or fifteen years, a fundamental evolution, which has resulted in the weakening of the Western powers. These were, to a large extent, the countries of the first wave of the Industrial Revolution. The United States and Germany can, however, be viewed as straddling the first and second waves, and Japan, the only "non-western" member of the G-7, is clearly a second wave country. Within the BRICS, there is one country characteristic of this second wave, Russia, but the other countries, China, India, Brazil and South Africa, countries which belong more to the fourth wave.

The important point to note is that the rise of the BRICS is largely due to that of China and India, two so-called "fourth wave" countries. Russia has only maintained its position. Brazil, meanwhile, sees its share decrease.

The dominance of free trade from the 1990s and the emergence of new industrial powers had caused a noticeable surge in trade, and in their share in world GDP, itself growing rapidly.

The first striking point is that of volume stagnation of world trade. The sum of world exports, which by construction is also the sum of imports, is used here as an indicator. A volume indicator is also used so that movements affecting relative prices do not distort the calculation. We can therefore see that, from 2005 to 2008, we went from index 100 to index 180 in 13 quarters, an increase of + 20% per year approximately. From the second quarter of 2008 to the third quarter of 2019, the increase was much smaller, since we are at the index of 192. Of course, there were the consequences of the financial crisis of 2008-2009. 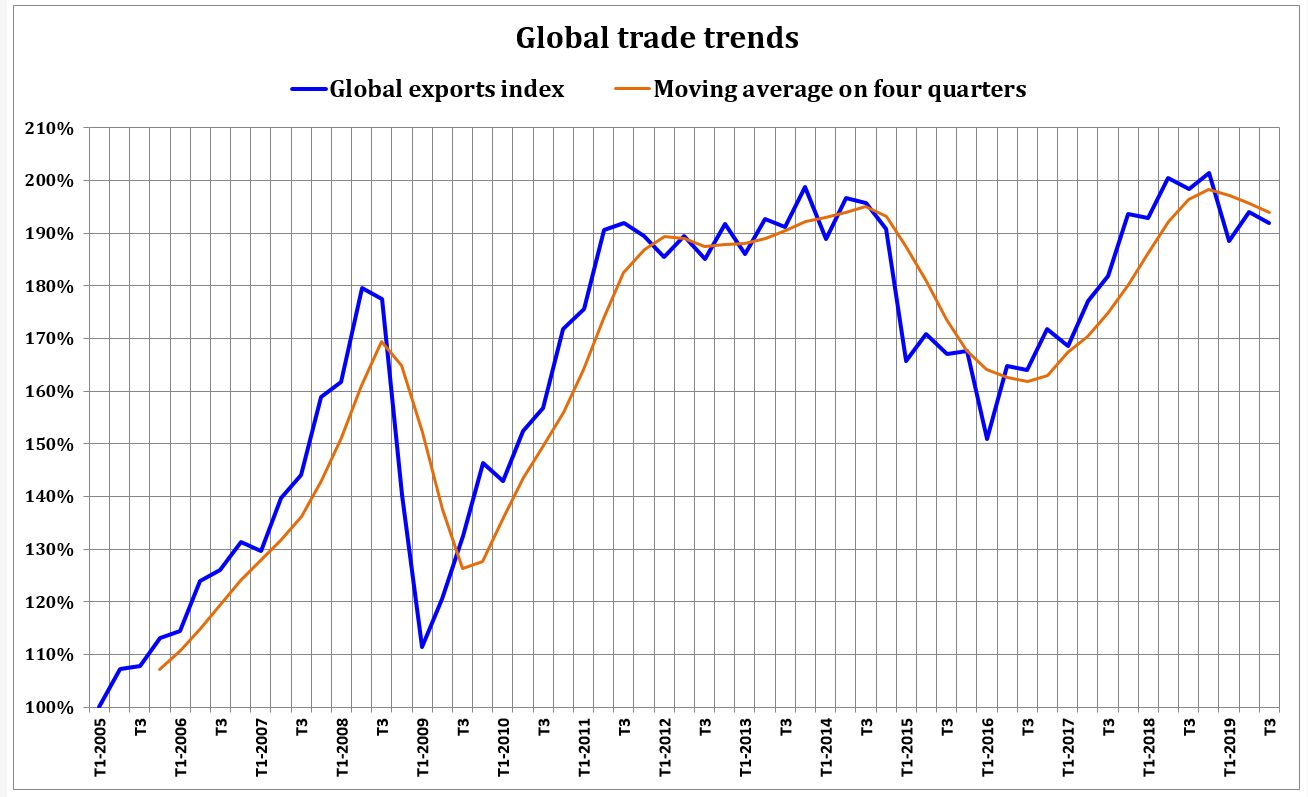 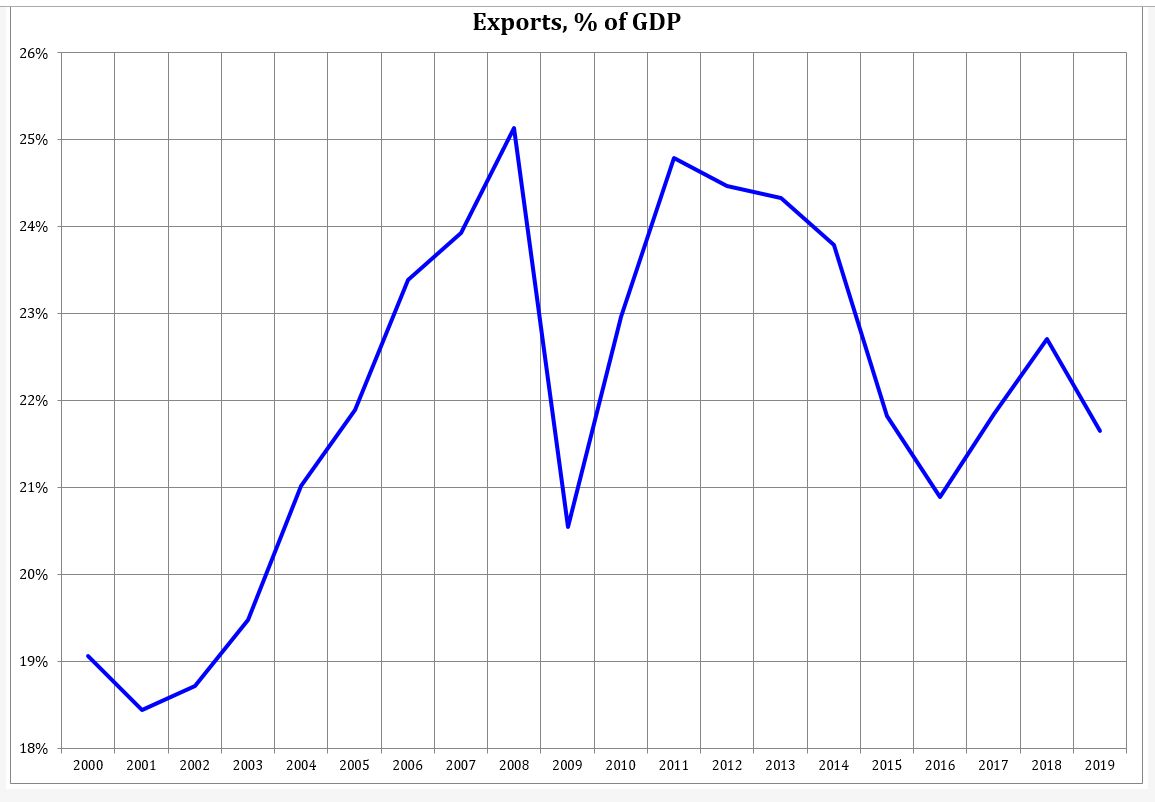 The drop in exports worldwide is also a drop in imports. Large exporting countries, such as China, are refocusing on their own populations. Countries which have not understood this new logic and which remain faithful to the logic of growth driven by international trade, of production oriented for export suffer, as is the case of Germany today. The importance of this turning point in 2012-2013 cannot be underestimated.

We would think that free trade would quickly become the general rule. The WTO, however, was quickly struck with paralysis. The "Doha Round" turns out to have been a dead end. Likewise, the sentiment born of these years, which led to trade being a cause of world growth and not a product of it, evaporated with the crisis of 2008-2009 and its consequences. This free trade has also become an international sticking point, as we have seen since the election of Donald Trump in the United States. In fact, the latter was content to radicalize a policy already started under Barak Obama.

Large exporting countries, such as China, are refocusing on their own populations. Countries which have not understood this new logic and which remain faithful to the logic of growth driven by international trade, of production oriented for export suffer, as is the case of Germany today. In other words, the quantitative impact of "globalization" has been declining for several years. This movement is also found when we look at the changes in the index of openness of the various groups of countries, an index which is calculated by relating to their GDP the amount of their international trade (imports and exports). After having increased from 2006 to 2011, it sometimes fell quite considerably from 2011 to 2016. It is therefore clear that the process of de-globalization does not correspond to a representation but rather to facts.

One can object here that what we are describing is only a transition phase between a globalization dominated by the United States and a new phase of globalization which would be dominated by China. Doesn't the initiative launched by the latter, the huge “one belt, one road” project, recreate a multilateral framework, but under Chinese domination? However, when we look precisely at the content of this initiative, we see that it combines ambitious investment projects in transport, and cooperation frameworks which are all bilateral frameworks. These frameworks have both an economic and a commercial scope, and a geopolitical scope. In fact, China seems more eager through this project to secure its supplies but also its markets than to develop an overall framework for the production of common standards.

The United States, for its part, has turned its back on multilateral agreements, which it has championed for decades. They have entered into comprehensive bilateral negotiations with China, recognizing in fact that states, states other than themselves, matter. Politics is therefore not absent, on the contrary. In this, this initiative, even if it takes forms from globalization, is indeed the product of de-globalization.

The origins of this process of de-globalization are therefore multiple; what made this turning point obvious was the crisis from 2007 to 2009, which we nicknamed the "subprime crisis". Other phenomena have also had their role, such as the turning point in Chinese economic policy for example. The forms of demonstrations are diverse, and are not limited to economic statistics alone. However, this phenomenon is no less a major reality. This de-globalization therefore goes hand in hand with de-westernization. The change in the balance of power between the major economies is today irreversible. This reality will determine medium and long-term developments.

Vladimir Putin Meets with Members of the Valdai Discussion Club. Transcript of the Plenary Session of the 18th Annual Meeting
Is a Large-Scale Influx of Refugees From Afghanistan to Russia Possible?

Urbs et Orbis. Urban Civilisation in Russia and How It Affects the Country’s Development
Origins and Challenges of Putin’s Conservative Strategy