The Shanghai Cooperation Organization (SCO) has played a significant role in the region for past fifteen years. Unlike other organizations, the SCO was created for regional cooperation, for developing ties between its member states. Despite SCO’s achievements, discourse on SCO's regionalism initiatives varies signiﬁcantly. While some credit SCO for gaining stability and predictability in the region, others consider it to be a mechanism for preserving authoritarian regimes and encouraging anti-western approach. The current discourse on regionalism acknowledges the relevance and utility of regional cooperation institutions for addressing transnational challenges and threats. The member states have continued to strengthen their efforts in the areas of security, politico-economic cooperation and for promoting regional stability. Though SCO started as a regional organization focusing on a number of speciﬁc regional issues, now its activities are even reaching the macro-regional scale. The SCO is now also focusing on regional network diplomacy and create regional bonhomie. Today, SCO certainly has the potential to play a larger role in the region.

The upcoming SCO Summit will take place in June 2017 in Astana. President of Kazakhstan noted that strengthening of regional security, development of economic cooperation, as well as cooperating in developing transit and transport corridors potential will be the main priority for Kazakh presidency in the organisation. While none of the Central Asian member states have ever questioned their membership in the SCO, nonetheless, views on the organization in Kazakhstan, Uzbekistan, Kyrgyzstan and Tajikistan vary considerably. Kazakhstan is one of the most energetic advocates of Eurasianism and in general supports all viable forms of regional cooperation. Kazakhstan also perceives itself as a “creative leader” in the region. The focus of the upcoming summit in Astana will be on strengthening regional connectivity and it is evident that as most of the SCO States by now have endorsed China's "One Belt, One Road" initiative, a key policy will be to connect trading partners along the ancient Silk Road passing through the SCO States.

During the past fifteen years, the framework of the SCO has given way to new realities. SCO was established as a result of negotiations between Russia, China, Kazakhstan, Tajikistan, and Kyrgyzstan on the demarcation of borders in Central Asia after disintegration of the Soviet Union. At that time, Russia's and China's relations were just recovering following a dramatic decline in the late 1960s and cautious normalization in the 1970–80s. Central Asian states faced a number of major challenges in the process of state-building, including border security and trans-boundary security risks. One of the major concerns of Central Asian states, Russia and China at that time, was to agree on the disputed or undecided border issues. Russia and China reached an agreement on the eastern part of the border, but jurisdiction over Tarabarov and Bolshoi Ussuriysky islands was yet to be decided in 1991. In 2004, the agreement on the Russian and Chinese border assigned island Tarabarov to China, while Bolshoi Ussuriysky Island was divided into Russian and Chinese parts and the agreement concluded amicably. This agreement resolved the remaining Russia-China border dispute. China established diplomatic relations with all Central Asian states in 1992. The year 1994 witnessed the agreement on the western part of Russia - China border. In 1996 and 1999, China and Kyrgyzstan reached an agreement on the common border issues. China and Kazakhstan signed bilateral agreements in 1994 and 1998, and completed border demarcation in 2002. China and Tajikistan concluded border agreements in 1999 and 2002. In the late 1990s, in addition to the border issues, the countries concerned started to discuss military conﬁdence-building measures and arms reductions in border areas, thus launching the so-called "Shanghai Process". Uzbekistan was also involved in the "Shanghai Process", though it did not have a border with China. However, talks proceeded with all the Central Asian states and the process resulted in the establishment of the Shanghai Cooperation Organisation (SCO) in 2001. Since that time, the organization has created a mechanism of regional security and humanitarian cooperation, making the ﬁght against terrorism and extremism as its priority.

China was not an active participant in multilateral regional cooperation projects of SCO for quite some time. However, today China and Russia along with other SCO member states maintain closer political and economic engagement and participate in a number of regional activities jointly. China pursues a consolidated strategy toward the region alongside with bilateral relations. This strategy has both security and economic dimensions. China’s strategy for the region pursued through SCO includes the ﬁght against terrorism, extremism and separatism, maintaining of border security, regional stability, participation in the economic development activities and access to regional energy resources. China has also begun its “Belt and Road" initiative, involving many SCO States.

Chinese leadership in the SCO is considered to be based on three pillars. The ﬁrst pillar is the “Shanghai spirit,” or the principles, which form the conceptual framework for the SCO’s development. The principles of the "Shanghai spirit", were formulated by the then Chairman of the People’s Republic of China Jiang Zemin. They include mutual trust, mutual benefits, equality, respect for different civilizational backgrounds and mutual prosperity. The other two pillars of Chinese leadership include supporting the continued institutionalization of the SCO and multilateral projects within the SCO. The discourse is such that most of the SCO members echo Chinese terminology and speak of a battle against the “three evils” i.e. extremism, terrorism, and separatism. It has been noted that over the past fifteen years a balance emerged in approaches within the SCO, concerning the organization’s further development. China promoted closer economic cooperation with SCO members, while Russia stressed the political and security aspects of multilateral cooperation. The other SCO member states like Kazakhstan, Uzbekistan, Kyrgyzstan and Tajikistan supported both approaches, while expressing cautious concern.

India and Pakistan has for long been trying to become full-members of SCO. The SCO's decision to give full membership to India and Pakistan involves regional integration processes and adds to SCO's decisive role and efficiency. It is expected that SCO's full-membership will enable both India and Pakistan to play more effective role in bringing stability in the region. In the upcoming summit in June in Astana, both nations are likely to become full members of the SCO. This will enable them to enhance the politico-economic cooperation and build a 'Common policy', along with other SCO members. 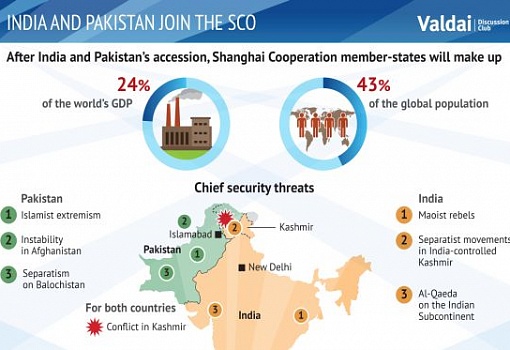 Russia has been strong supporter of bringing Iran as full member as well. However, for the time being only India and Pakistan will be given full membership. As both India and Pakistan are nuclear powers with a history of conflict, there were concerns about their full membership. Some argued that these new members might bring their disputes to SCO making it less effective. However, the counter-argument is such that there have been disputes existed between few present SCO full members too, but that has not hampered the efficiency of the organization. According to SCO Charter, both India and Pakistan have met the criteria mentioned in SCO's legal documents and expect to get full membership at the SCO Council of Heads of State meeting scheduled in Astana next month. This historical decision by SCO will elevate the profile of the organisation and significantly strengthen its capabilities in various directions.

India has maintained good relations with all SCO members; hence, prospects for future cooperation are very bright. India’s inclusion as full member will be a significant step. India has been constantly showing its desire to play much more constructive and meaningful role in SCO. India’s economic growth, potential young demographic profile and its growing political impudence can become an asset for the growth of SCO. The SCO is gradually realising its ambitious economic integration agenda, including formation of a free-trade zone and setting-up rules for the free movement of goods, services and technologies within the SCO member states. A strong India-SCO relationship would bring major trade and investment opportunities. The SCO and India both share a common interest in disrupting terrorist networks in and around Afghanistan. India as well as other SCO member states views Afghanistan as a crucial strategic challenge. India has shown keenness on sharing security concerns of the region with SCO and also work closely with other SCO members in Afghanistan. As most of the SCO members states share the common border with Afghanistan, it becomes essential for SCO to maintain peace and stability in Afghanistan. Hence, in this regard SCO would appreciate India's cooperation. India is a major donor for the reconstruction and assistance programmes in Afghanistan. Government of Afghanistan also wants closer co-operation with SCO member states. By getting full membership in SCO, India can enhance linkages and build an atmosphere for boosting trade by easing barriers. In the long run, India through dialogue and better cooperation with SCO might be able to fulfil its own interests within the region.

The SCO, over the years has become a dynamic, influential and ambitious organisation, stretching across a large part of the Asian continent. For India, interaction with the SCO is important as an element of its cooperation with Central Asia and its broader strategy for the region. For Russia and China, the SCO is important, not only as a framework of regional integration, as perceived from the point of view of the classical integration theory, but as a way to structure the regional space without external involvement.

Today, SCO’s approach is to emphasize on consolidation, long-term planning and avoid marginalisation. The discourse on SCO is such that SCO should be considered as an important forum for addressing regional threats and for increasing regional cooperation. India along with other member states can cooperate with the SCO to fight regional as well as global threats and concerns related to climate change, environment and food security. India can make constructive contribution by getting full membership in SCO. The SCO is expected to offer solutions to emerging security and politico-economic challenges in the region. Moreover, growing cooperation among the regional countries will strengthen regional mechanism.

Nivedita Das Kundu, Ph.D.Expert on International Relations. Specialist on Eurasia. Following developments in SCO for more than decades and published number of reports on SCO, being part of SCO Forums.

Views expressed are of individual Members and Contributors, rather than the Club's, unless explicitly stated otherwise.
Tags
Shanghai Cooperation Organization
Print
Send by e-mail
Send by e-mail
Add to blog
Add to blog

USA, Europe and Containment of China
The Crumbling of the World Order and Its Friends: Results of 2021