The COVID 19 pandemic reshuffled economic balances in the world. Forced to go lockdowns, developed countries chose to pump money into the system to avoid massive layoffs. This strategy worked somehow and mitigated the pandemic’s impact. After shrinking by 3.4 percent, the markets recovered in 2021. The World Bank estimates the growth to be 5.5 percent in 2021, and to decelerate down to 4.1 percent in 2022. The rapid rebound in the economy with the abundance of cash led to many problems including dramatic increases in commodity prices and global inflation. Central Banks tend to increase interest rates to tackle this problem. In December 2021, the Bank of England decided to increase the policy rate by 15 basis points, whereas the Federal Reserve (FED) and European Central Bank also gave signals to follow a similar strategy this year. Such a move will shrink the volume of available funds for the emerging markets and lead to a slowdown in economic growth. Such an environment increases the fragility in the emerging economies further.

As a developing economy that faces the problems of the middle-income trap, Turkey is also prone to these shifts. The Turkish government aims to change the odds for Turkey by pursuing a heterodox economic policy. Despite the global tendency to increase the interest rates, the Central Bank of Turkey (CBRT) decided to decrease the policy rate last year from 19 percent in September to 14 percent in December. The government defended CBRT’s decision based on two main arguments. First, the economy needs to grow and the interest rates need to go down to boost investment. Second, the Turkish Lira is overvalued and this undermines Turkey’s ability to export more. Thus, such a move would lead to depreciation in the Turkish Lira, and a “competitive exchange rate” would serve to increase Turkish exports.

The CBRT’s decision to decrease the policy rate was harshly opposed by mainstream economists. They said that while there is an inflationary global trend, the decision to take down the policy rate would create an unfavorable environment. They warned about an immediate impact of further dollarization in the economy. The consumer price index (CPI) was above 20 percent when the CBRT decided to decrease the policy rate in September 2021. As the policy rate came down, this meant a negative interest rate for the deposit holders. Under these circumstances, the Turkish economy entered into turbulence starting from November 2021. The parity rate which was ₺9.48 per dollar at the beginning of November, steadily increased and tested over ₺18 per dollar on December 20, 2021. Combined with the discourse of “competitive exchange rate”, the rapid depreciation in the Turkish Lira further boosted foreign currency demand in Turkey. Consequently, the share of Turkish Lira deposits decreased to less than 50 percent of the whole savings in the commercial banks.

Business circles like TÜSİAD and TOBB called for immediate measures to be taken against the turbulence. Following these calls, President Erdoğan said that “We are aware of the problems of our people, due to the increasing prices. However, we will resist this as we did before against tutelary, terrorist organizations, and plotters. You, TÜSİAD, and its offshoots, your only obligation is to make investment, [create] employment, and growth. What are you doing about this...Don’t seek different ways to attack the government!”

Looking at the president’s response to the criticisms, it can be seen that the economic turbulence was presented as a plot against the government to undermine its credibility and success. Some commentators also adopted a similar discourse. They claimed that the foreign power centers were targeting Turkey by using economic means, due to Ankara’s independent foreign policy in the region. Despite the presence of such a discourse, the pressure on the markets became unbearable and the government decided to take measures to stop the free fall of the Turkish Lira on December 20, 2021.

To prevent further dollarization, the government introduced FX (foreign exchange)-protected lira deposits to reverse the dollarization trend. This instrument guarantees to cover the losses of deposit holders, in case of a greater depreciation of the Turkish Lira against foreign exchanges than the given interest rate. Following the introduction of new policy instruments, the dramatic plunge in the Turkish Lira reversed and the parity even tested ₺10.19 per dollar as of December 23. Shortly after, it rebounded from that level and reached an equilibrium below ₺14 per dollar.

Getting out of the turbulence

Such a rapid recovery in the value of domestic currency gave leverage to the government in shaping its discourse. December 20, 2021, is seen as a critical juncture by the government. Before the introduction of the new instruments, the CBRT had intervened in the markets by selling $7.27 billion, but these interventions had limited impact. However, after December 20, the market gained relatively a stable character. 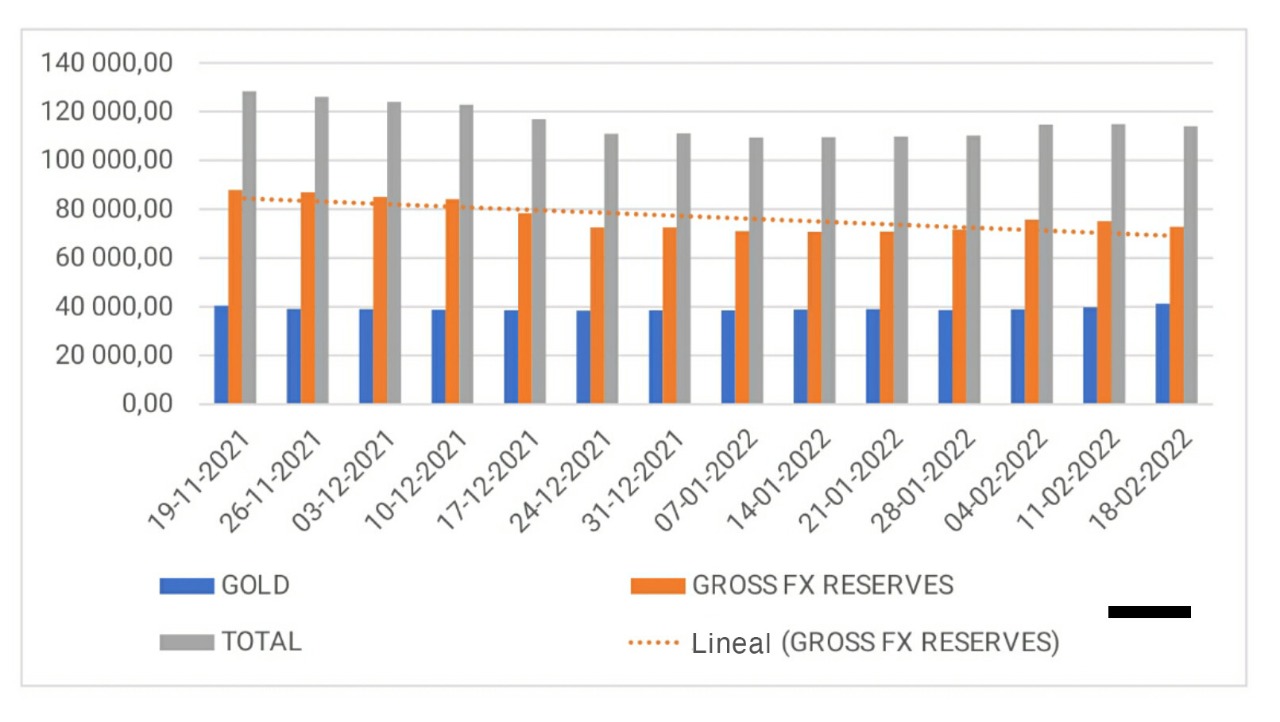 The CBRT continues to play a regulator role by using its reserves. Looking at the Graph 1, it can be seen that the level of gross reserves was $128.4 on November 19 but diminished by $19 billion until January 7, 2022. The data shows that the CBRT’s reserves were actively used since November 2021, to supply foreign currency demand in the markets. However, the decline in the reserves slowed down and even recovered a couple of billion dollars as of February 2022.

The CBRT’s interventions in markets create pressure on the reserves. Turkey has opted to overcome this problem by making swap deals with third countries since 2018. While increasing Turkey’s liabilities, the influx of new funds helps to strengthen the reserves in nominal terms. Up until now, the CBRT signed four swap deals with the central banks of Qatar, China, the UAE, and Korea. As can be seen from the table above, the total value of these agreements is $28 billion. Additionally, there are memorandums of understanding with Turkmenistan, Azerbaijan, Libya, and Uzbekistan.

Controlling the free fall without increasing the policy rate is seen as a success by the officials. Nevertheless, combined with the global inflation trend, the cost of pursuing heterodox strategies is the rapid increase in the inflation rate. For the first time in the AK Party’s history, the CPI became 36 percent in December 2021. The increasing trend continues as the CPI reached 48.69 percent in January. This trend is likely to be upward due to exchange rate pass-through and increasing energy costs.

Important indicators for the future

The exchange rate markets are stabilized for the moment. Nevertheless, the increasing domestic inflation, rising energy prices, and the likelihood of tightened monetary policies in developed countries create risks for the Turkish economy.  For the moment, the main strategy is to preserve economic stability until the summer. Compared to 2019, Turkey faced a dramatic decline in tourism revenues in 2020 and 2021. This year the expectations are to recover these losses with the depreciation of the Turkish Lira and normalization in the pandemic conditions.

Currently, Turkey tries to control the economic fluctuation through mechanisms other than the interest rate. A well-known economic theory, “the impossible trinity”, states that having a regime of free capital movement, pursuing an independent monetary policy (not taking into account the market dynamics while taking down the policy rate), and keeping foreign exchange rate at a narrow band is not possible. Such a policy increases the pressure on the foreign exchange markets, causes inflation, and leads to dollarization. Considering the fact that Turkey had limited maneuvering space due to its declined CBRT reserves, it might have to limit capital movements or increase the policy rates to bring stability to markets in the future. The former is too risky and may cause deeper problems in the economy. Thus, a major control is not likely for now.

Thus, there are two rational options ahead for the Turkish economy: letting the inflation rate go up or increasing the policy rate. The first option may cause further problems in the economy, like causing sticky inflation and impoverishment of the middle class. Regarding the second option, it is hard to ignore the possibility of a policy rate hike at some point. However, looking at the present discourse, this is unlikely for the moment. Such a dramatic shift will also have its impacts on the economy like further slow-down in the growth rates. And this might be a risky decision on the eve of the upcoming elections.

The above picture shows that the Turkish economy is prone to external shocks as an emerging market. Monetary authorities in the developed countries signal to tighten monetary policies to avoid a structural problem of inflation. Such a trend is likely to increase the cost of borrowing for Turkey. To avoid further depreciation of the Turkish Lira, the monetary authorities may decide to change the heterodox strategy and go back to orthodox policies. Nevertheless, any postponement in tightening monetary policies in the developed countries will serve the interests of the AK Party government.

Pursuing a heterodox strategy, the monetary authority managed to bring stability to the markets with limited leeway. In this setting, Turkey’s foreign trade and tourism performance would be important indicators to follow this year along with the inflation. Nevertheless, the regional political dynamics have the potential to directly affect these indicators. For instance, the immediate impacts of Russia’s intervention in Ukraine was negative on Turkish economy. This will also potentially undermine Turkey’s expectations from tourism and foreign trade while leading to a higher inflation rate along with further current account deficit.

Officially the upcoming elections are scheduled for June 2023. 16 months is too short for a major shift in the economic policy and to get positive returns, whereas it can be too long for sustaining stability in the markets and avoiding major turbulence. Under these circumstances, the timing of the upcoming elections becomes important and hardly independent of the success of the current policies. AK Party officials argue that the elections will take place on time, despite the opposition’s calls for going to the ballot box. Catching a positive trend during the summer, the AK Party may decide to go to early elections in the autumn of 2022 or a little bit later. But the stakes are getting higher as the commodity prices are increasing in global scale. Thus, the current economic dynamics are getting less favorable for the government to take the risk.


[1] The swap deals are made in national currencies. In this table, these deals are given in dollars for ease of understanding.

NATO in Madrid: An Extraordinary Summit
Valdai Club to Discuss Russia’s Place on the New Values Map of the World

Related articles
Ukrainian Crisis, Turkey and Eurasia: Who Wins? Follow the link
Transit Crisis: Formal Mistakes and Informal Consequences Follow the link
LIVE: A Discussion on the Results of the NATO Summit and the New Strategic Concept of the Alliance Follow the link