The elections to the European Union Parliament of May 2019 secured significant gains for the Euro-sceptic parties. The major established parties suffered significant defeats. In Germany, the mainstream Christian Democrats lost seats to the Greens and in France the mainstream parties (Republicans and Socialist) received less than 15 per cent of the vote, while Marie Le Pen’s National Rally with 23.3 per cent became the most popular party in France. Overall in the European Union elections, the share of the total vote for the socialist/social democratic parties fell by 6.5 per cent and for the centre right by 4.6 per cent; while the vote for the Greens rose by 3.1 per cent, for the liberals by 4 per cent, the nationalist parties increased their vote by 9.5 per cent. The previously governing centre-right parties led by Germany and France lost their majority in the European Parliament; their total seats fell from 412 to 218.

What do these results signify? Clearly, realignment from the major political parties continues: social-democratic parties lost 38 seats, the centre 43, while the nationalists gained 58 and currently enjoy a majority vote in France, Italy, Poland and the UK. However, they have had some set backs with a declining share of the votes in Germany (Alternative for Germany), Denmark and the Netherlands. Germany illustrates these trends: the Greens came second with 20.5 per cent of the vote and the once powerful Social Democratic Party fell to 16.2 per cent.

The ascent of Euro-sceptic parties continues: now roughly a quarter of deputies are members of such parties. Issues concerned with national sovereignty, immigration and climate change are taking the place of class issues and levels of taxation. The rise of parties stressing environmental issues is also striking and indicates the unfolding of a new urban dimension.

This political realignment is a sign for future developments in EU politics. While the European Commission, the Council and the Central Bank will renew their leaders in the near future, the Parliament has no direct say in the selection of candidates. Moreover, the fragmentation of the national party systems and the lack of political solidarity in the EU’s former central core - Germany, France and the departing UK – indicate a further weakening of its political geo-political influence. Further disintegration or the move to a strengthening of the core northern states leaving a periphery of the eastern and southern member states are possible outcomes. The EU’s role in world politics under these circumstances is not likely to challenge developments in the USA or China. Further disintegration following the path of Britain’s planned exit from the EU is unlikely as the costs of leaving outweigh the benefits of staying.

The UK’s Verdict on the European Union

Study of UK politics, as reflected in the European elections, confirms some of the European trends noted above. Details of the voting are shown on Figure 1 which records the total number of seats won, the change in the number of seats and the proportion of the vote. While the turnout of voters overall in May 2019 secured on average 51 per cent of the EU electorate, many of the New Member states had fewer than the 33 per cent who turned out in the UK. (Slovakia had the lowest turnout with 24%, followed by Slovenia, Czech Republic, Bulgaria, Portugal and Latvia). 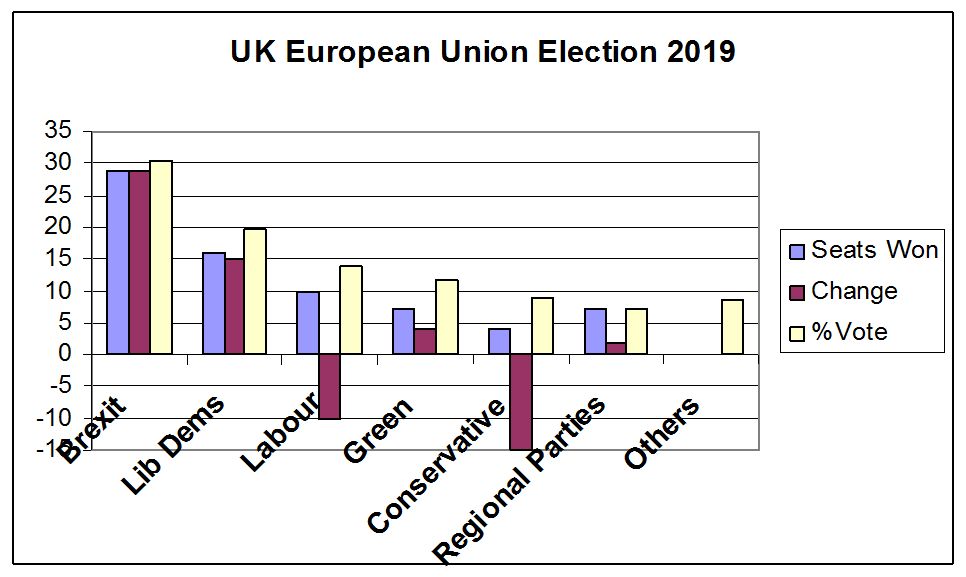 The clear winner in the UK is the Brexit Party, led by a current Member of the European Parliament, Nigel Farage, which had a majority of votes in all UK regions except London, Scotland and Northern Ireland. This is a remarkable achievement for a Party which was only registered in February 2019. It took its votes mainly from the former United Kingdom Independent Party which had campaigned against membership of the European Union as well as voters who had previously voted for the major parties.

The Conservative Party, led by Prime Minister Theresa May, suffered a crushing defeat: they polled only 8.8 per cent of the votes, losing fifteen of their nineteen seats. The Labour Party, the major opposition Party, led by Jeremy Corbyn, lost half of its former seats (10) and received only 13.7 per cent of the votes. Liberal Democrats, mainly on a pro-European Union policy, as well as the Greens increased their vote, the former considerably – coming second, after the Brexit Party, and increasing their representation from one seat to sixteen.

The election was solely about membership of the European Union and the fiasco of the UK’s Parliament, which had voted to leave the EU by a large majority but still remained in the Union after three years of pointless negotiation. Both the Conservative and Labour Parties had backed the referendum vote to leave but had vacillated over the conditions of withdrawal. Both were severely punished by the electorate. The Liberal Democrats, who campaigned on a programme of: Stop Brexit, picked up those who wished to remain in the EU.

The election results however are not an unambiguous verdict of the British people’s choice to remain or leave. In the UK Referendum on the EU, held in June 2016, 17.4 million people voted to leave: the Brexit Party received only 5.3 million votes in 2019. The total anti-EU vote when we add the UK Independence Party comes to 5.8 million. On the other side, 6.6 million voted for parties which were unambiguously for remaining in the EU. The arithmetic becomes complicated as both the Conservative and Labour Parties are officially for leaving the European Union, but contain many ‘remainers’. What the figures show is that there is a hard core of Leavers and an equally hard core of Remainers of some six million people.

The message to the major parties however is that fudging the issue, and seeking a Brexit with the least damage, does not command support. The result will probably polarise UK politics even further. The Conservatives with a new leader will undoubtedly take a firmer position with regard to the EU and will, if necessary, leave the EU on World Trade Organisation rules, pending any further agreement. For Labour, reneging openly on their policy of supporting the Referendum result is not credible. The way out for them is a ‘second referendum’ which many of its Parliamentary leaders want. The outcome of such a referendum, they hope, would lead to a majority remain vote. In this way, they would not be breaking their promise to ‘accept the people’s vote’. Such a second referendum, however, is unlikely as it lacks sufficient parliamentary support. Leaving the European Union on WTO rules is becoming a likely and realistic option.

Underlying these developments both in the UK and in continental Europe is the rise of an ‘anti-politics’. In the UK there is a fundamental disenchantment with the established political classes, epitomised by their inability to fulfil the results of the 2016 referendum on EU membership. In continental Europe the parallels are EU tactics to call for further referendums when the voters return the ‘wrong’ result for the first one. This not only applies to the disconnection between the major political parties and citizens but also to scepticism of, if not disbelief in, the traditional ‘accountability’ of the political elites to Parliaments. More direct plebiscitary methods of politics have been introduced to meet these demands – though the political elites in the UK still promote a deeply embedded process of parliamentary sovereignty, and in the EU a belief in the supremacy of European Union laws.

David Lane is a Fellow of the (British) Academy of Social Sciences. He is currently an Emeritus Fellow of Emmanuel College, Cambridge University, UK. His recent work includes, Changing Regional Alliances for China and the West (With G. Zhu) (2018)

Theresa May Bows Out; Brexit Goes On
Mary Dejevsky
﻿There can be few more thankless jobs in Europe, perhaps the world, at present than that of British prime minister. So Theresa May’s announcement that she is resigning as leader of the Conservative Party as soon as the State Visit of the US President and the commemoration of the D-Day landings are over, and will leave Downing Street just as soon as a successor is chosen, came as little surprise, either in the UK or further afield. It was less a question of if she was going to leave, than when.
Expert Opinions
The Conundrum of the Irish Backstop to Prevent Brexit
David Lane
One of the major aspects of the bizarre failure of the UK to leave the European Union is the inability of the government of the UK to resolve the issue of passage over the border between Northern Ireland and the Republic of Ireland.
Expert Opinions
Views expressed are of individual Members and Contributors, rather than the Club's, unless explicitly stated otherwise.
Tags
European Union
European Parliament
Brexit
United Kingdom
Print
Send by e-mail
Send by e-mail
Add to blog
Add to blog

Election Results: Germany in Front of a Black Box
USA-Iran: Why Is the Deal Stalled?

Green Transformation as an Economic Policy Tool
Digital Non-Alignment: How to Avoid Bipolarity in the Digital World

Related articles
The European Union and ‘Strategic Autonomy’ — An Elusive Concept in the Making Follow the link
How the COVID-19 Pandemic Exposed EU’s Weaknesses Follow the link
The Pandemic and International Migration: Exploiting the Healthcare Crisis to Reform Mobility Governance Follow the link