It was assumed that the implementation of national projects would be the number one task for economic policy during the current year. The mere fact of the formation of a new government in mid-January 2020, also seemed to be a factor increasing the likelihood of the full-scale implementation of national projects. Nevertheless, the deterioration of the global environment indicates significant budgetary risks, writes Natalia Orlova, Chief Economist of Alfa-Bank. 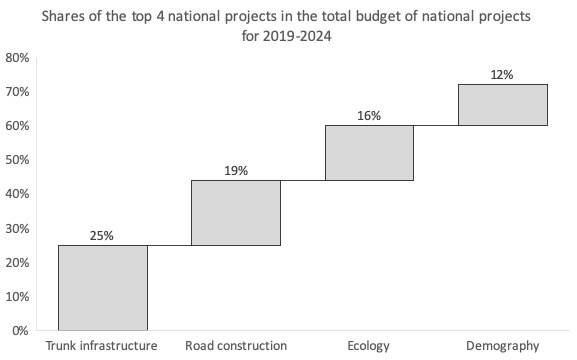 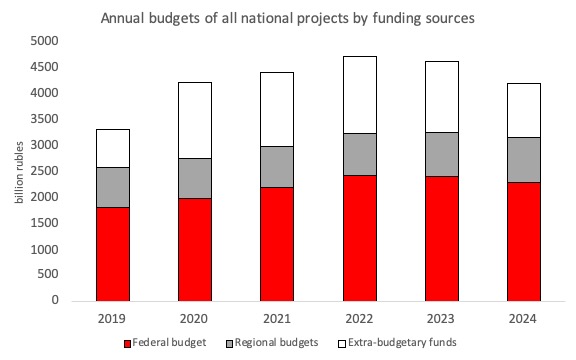 However, the first year of execution of the national projects revealed that it was not easy to ensure the effective implementation of such ambitious tasks. In the first three quarters of 2019, the Accounts Chamber recorded a significant lag in the actual federal financing of national projects from the plan. In 1Q2019, only 13% of what had been earmarked from the budget was spent on the national products. In the first two quarters of the year, only 32% of the funding was spent, and even by the end of September, this figure only amounted to 52%. This meant that in the first three months of 2019, the federal budget had allocated only 200 billion rubles to finance these programmes; in the 4th quarter only about 600 billion was spent, creating a significant seasonality effect for economic activity indicators. Expectations of budget spending growth in 2019 forced the Central Bank of Russia to pursue an excessively tight monetary policy in the first half of the year, which, against the backdrop of budget spending lagging behind the plan, led to an accelerated slowdown in inflation and then forced the Central Bank to move to a lower key rate more quickly than expected. The second important point is that despite attempts to accelerate the financing of national projects at the end of 2019, the level of their implementation at the end of the year was still behind the plan. According to estimates of the Accounts Chamber, at the end of the year, on average, their financing amounted to 88% of the plan, while in some projects the identified lag was more significant.

The beginning of this year marked the manifestation of two factors that will have a significant impact on the further implementation of national projects, but their impact, unfortunately, is multidirectional. On the one hand, the need to ensure the restoration of investment growth seems increasingly urgent: since 2013, the level of Russia’s GDP has grown by 5% in real terms, but the level of gross fixed capital formation by the end of 2019 was still 6% lower than in 2013, which will limit economic growth over the next several years. In light of the fact that Russia’s economic growth at the end of 2019 amounted to only 1.3% year-on-year, it was assumed that the implementation of national projects would be the number one task for economic policy during the current year. The mere fact of the formation of a new government in mid-January 2020, after President Vladimir Putin announced in his annual address that it was necessary to accelerate the growth rate of the Russian Federation to levels higher than the world average in future years, also seemed to be a factor increasing the likelihood of the full-scale implementation of national projects. The government’s intention to more actively use budget expenditures to stimulate growth was indirectly evidenced by the fact that according to the same Accounts Chamber, national projects were financed by 16% of the annual plan, according to the 1Q20 results. 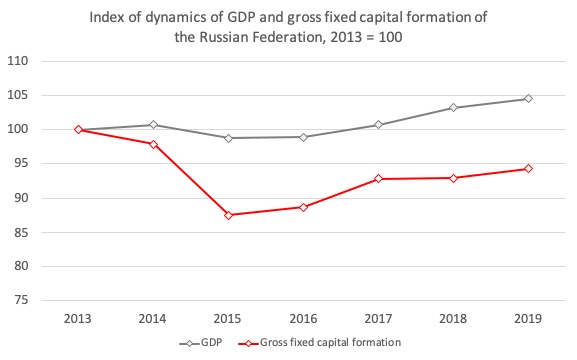 Nevertheless, the deterioration of the global environment amid the emergence of a pandemic indicates significant budgetary risks associated with the possible consolidation of energy prices at levels lower than those originally planned for the coming years. Weak demand, which so far looks like a short-term factor, could turn into a long-term trend; this risk is especially significant if the global epidemic is seen as a threat related to the global climate change, which will accelerate the transition to alternative energy sources and radically change the global energy market.

Since 2014, the Russian government has consistently tightened its fiscal policy, which has allowed it to reduce the break-even point in terms of oil prices at which the federal budget is balanced from 104 dollars per barrel in 2014 to 49 dollars per barrel in 2018-2019. At the beginning of this year, this value seemed sufficient to draw a line under the period of fiscal consolidation and to hope that the budget would cease to be a limiting factor in economic growth. However, the current situation in world oil markets has created additional challenges for the budget of the Russian federal government. 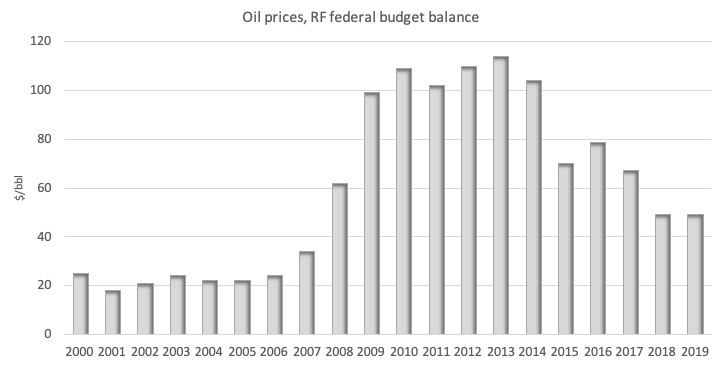 If the price of the commodity continues to remain low over the coming years, a further adjustment may be necessitated so that the budget is balanced at an even lower oil price, at least not exceeding the cut-off value of the relevant budgetary rule, that is, to $42-43/bbl. In other words, federal budgetary expenditures will need to be cut by about 800 billion rubles per year – this amount is equivalent to a third of the annual budget of national projects.

An additional factor that could jeopardise the budgets of national projects is the growing need to increase social spending. Accelerating economic growth was vital to reverse the negative dynamics of household incomes. In recent years, household incomes have continued to stagnate and, according to the results of 2019, were still 10% below the level of 2013-2014 in real terms. The on-going pandemic only makes matters worse: the most conservative estimates for 2020 indicate the risk of a decline in household real disposable income of 3-5% year-on-year. The budgetary consequences will be more painful at the regional level than for the federal government; after all, the likely unemployment increase, a decrease in household incomes and the bankruptcy of small and medium-sized companies will primarily lead to a reduction in the revenues of regional rather than federal budgets, which in turn will force regional authorities to cut spending. The prospects for an economic downturn cannot but force the federal government to increase social benefits. It is possible that these payments can be partially financed within the framework of national projects, but one thing is certain – in the face of low oil prices and the growing need to increase social payments, investment budgets will be under threat of revision, which means there is a significant risk that national projects, which could offer investment incentives, will not be able to be fully realised amid changing global conditions.

In addition, the pandemic is changing the prioritisation within the structure of national projects. The national projects “Healthcare” and “Demography”, are aimed to increase the life expectancy and quality of medical services, but in the current conditions it is already obvious that this will be associated with the need to further increase expenditures in these areas in order to stop the spread of the current epidemic, as well as increase the willingness of medical services in the event of a second or third wave. Analogies with the 1918-1919 Spanish flu epidemic have forced us to take seriously the risk of a new wave of the epidemic on the horizon of the next 6-12 months, which means that the development of a system of tests and vaccines will require increased funding from the budget. At the same time, according to the Federal State Statistics Service, the current number of senior and secondary medical staff is lower than in 2010, which means that pandemic challenges may require not only in large budget expenditures for equipping medical facilities, but also an employment increase in medicine.

Views expressed are of individual Members and Contributors, rather than the Club's, unless explicitly stated otherwise.
Tags
Russia
national projects
Print
Send by e-mail
Send by e-mail
Add to blog
Add to blog

Concerning Valdai Club’s Activities on Social Media and Online Video Platforms
What Is a Sovereign State?

The New Naval Doctrine of Russia
To Confiscate and Get Convicted? Seventh Package of Sanctions against Russia Presents Unaccounted-for Risks

Valdai Club to Discuss the Kaliningrad Transit
Taiwan: Is the Threat of a Military Conflict Between the US and China Real?