Quite recently, the present writer offered theoretical remarks on the likelihood of a military conflict on the Korean Peninsula[1], noting that the probability of this has increased considerably this year. But the interest aroused by this subject compels him to discuss in greater detail what will happen if the conflict takes place after all, how it may develop and what possible consequences it could have for the region.

Even though outwardly the situation may look like waves of a crisis, with yet another statement or move making the press write that the “peninsula is on the brink of war,” with the agitation then again subsiding, what should be kept in mind is that the aggravation-causing trends do not go away, The security dilemma linked to the North Korean nuclear program is still there, as is reciprocal psychological pressure and stress, which can easily prompt an incorrect decision based on the wrong interpretation of this or that signal.

As a result, I see the following reasons that can directly lead to a conflict:

The abovementioned conditions make it clear that neither side will accept a limited war. An ideal option for both the North and its opponent is to deliver a crushing strike from the start. It would be logical if the United States attacked not only the enemy nuclear facilities or key infrastructure but also potential response capability to minimize damage to US bases in Japan and South Korea. Given the existence of numerous decoy targets and a high level of engineered protection of these facilities, their elimination is serious business. For the same reason, it would be logical for North Korea to attack South Korean ports and US bases in Japan with nuclear weapons to complicate to the utmost a US redeployment to the TO and destroy “advance infrastructure.” In this case, there is at least some chance to stick it out if not go out with a bang. 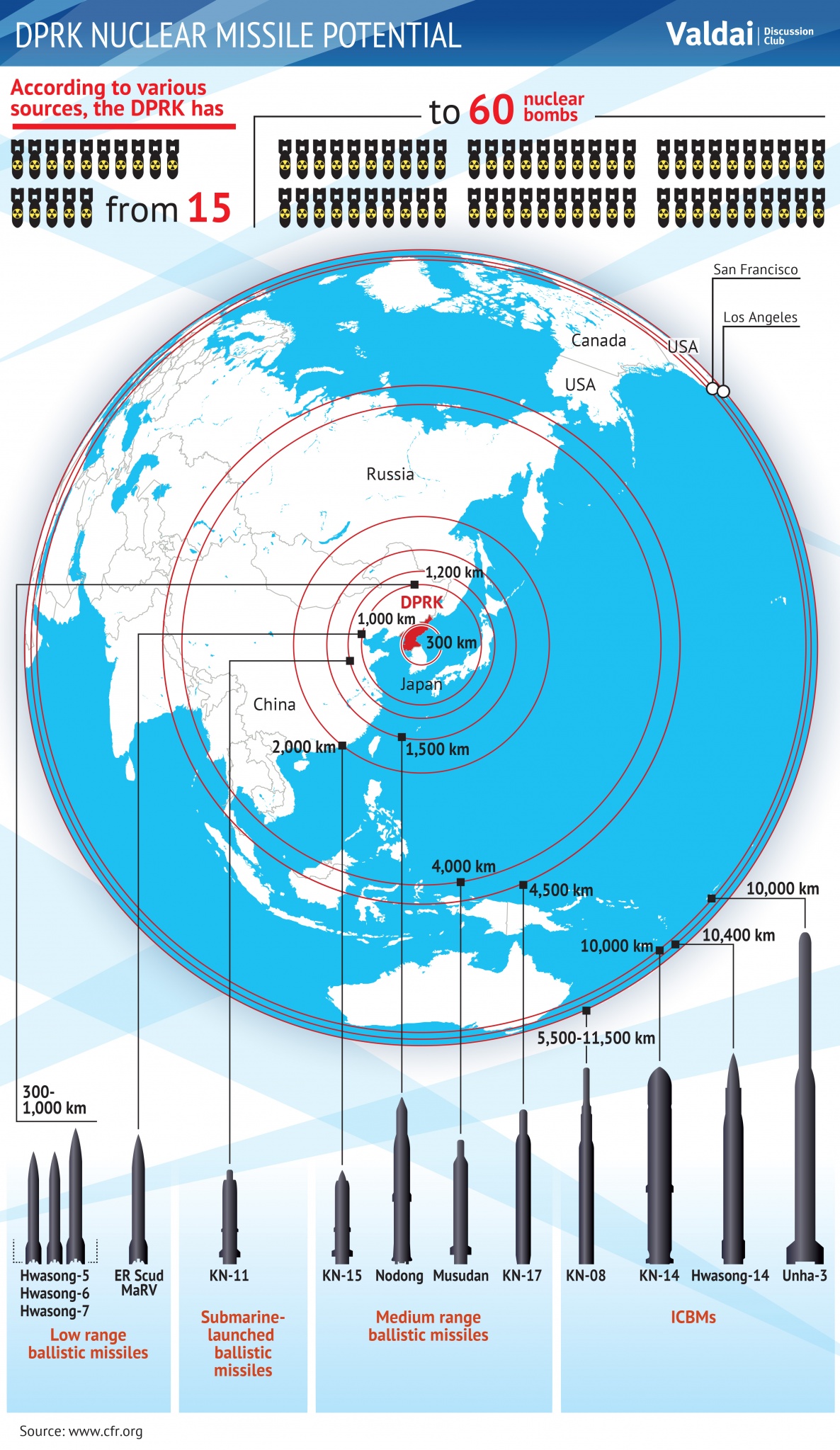 It is clear that each side feels it possesses a seemingly most advantageous strategy. As mentioned above, the best scenario for the US is to destroy North Korea’s strategic response and infrastructure facilities by long-range and precision weapons without launching important operations on the ground (at least at the start of the conflict) and to impose on the enemy a war of attrition with the use of its overarching military, economic, air and naval superiority. North Korea’s only chance of success is a rapid assault on and capture of the South Korean capital within the first few days of the war based on chaos, panic and fear of losses in the enemy camp.

But a potentially successful plan needs to be competently implemented. It should be remembered that advantages or disadvantages ascribed to either side are not as obvious as they may seem. Of the three potential belligerents, only the US army has a real fighting record, whereas the North and South Korean armies have not been involved in any serious combat operations for the last 30 years. Therefore, all the talk about the efficiency of North Korean super-commandos or South Korean “combat electronics” is rather a reflection of different expert opinions.

These unobvious points based on the widely varying estimates of biased analysts are the following:

1.     The likelihood that the “southern coalition” can effectively wipe out most of the North Korean response capability.

2.      The potential damage to Seoul from long-range artillery and MLRS fire and the ability of both North and South Korean gunners to engage in effective counter-battery duels. Steve Bannon’s recent statement that the first half-hour of this shelling will lead to 10 million victims is an extreme assessment.

3.     That North Korea has enough fuel to profit by its edge in tanks. This issue is of particular importance, given the US attempts to impose a fuel embargo against the DPRK.

4.     The morale of the army and the real level of combat training both in the North and the South. Suffice it to recall the five-day war in 2008 and how wide off the mark the preliminary estimates of the Georgian and Russian armies were.

A conflict of this scale inevitably suggests the conclusion that its consequences would be catastrophic. The aftermath of nuclear strikes and destruction of nuclear facilities in North Korea and nuclear power plants in South Korea would be comparable if not superior to Chernobyl and Fukushima.

There is also high likelihood that the conflict will be overtly or covertly internationalized. It would be logical if the US wanted to present the operation as punishment meted out to a rogue state by the entire international community. On the other hand, if it is the “South” that starts the conflict, China, without officially joining the war, may supply North Korea with air-defense systems and send instructors as well as, in a critical situation, “volunteers” from among those Koreans living in China.

It is also clear that the Russian Federation will not be able to sit on its hands either. Any serious conflict on the Korean Peninsula will affect our country even if not a single US precision weapon reaches our territory. There is likely to be a range of consequences, from a stream of refugees to the nearly improbable, but still existing chance that some part of Russian territory will be contaminated by nuclear falloff.

In this context, Moscow should pursue a two-pronged policy. First, to do its utmost to avert a conflict by various means; from confidence-building measures to containment strategy. Second, if a conflict does indeed break out, Moscow should make sure that Russian air defense systems are ready to shoot down any hostile object, that the Russian Emergencies Ministry is prepared to deal with any likely environmental and humanitarian disasters on the Korean Peninsula, and that it has a plan for addressing the same problems at home.


Views expressed are of individual Members and Contributors, rather than the Club's, unless explicitly stated otherwise.
Tags
North Korea
South Korea
United States
Print
Send by e-mail
Send by e-mail
Add to blog
Add to blog