The VI Conference on International Security (MCIS-2017) opens in Moscow on April 26, 2017. In interviews with www.valdaiclub.com Valdai Club experts shared their views on a number of issues that will be discussed at the forum.

Dmitry Gorenburg, Senior Analyst at CNA, a non-profit think tank: All common ground questions founder on the reefs of the larger relationship. In the current environment, it is a mistake to think that we have some common interests in regions, that we can come to an agreement.

Russia has, in my mind, a history of this, where the US would come in and say that we have common interests in Afghanistan and Syria against terrorism. Russians would say yes we do, but we’d like to be treated as an equal on the international scene, so let’s use these things to do that.

Things would always founder on that because the US was not willing to treat Russia as an equal. Now there is an even more difficult position, on the US side all relations with Russia are being seen through the domestic image of Russia having helped Trump in the election.

This in some ways makes it even more difficult for Trump to make a deal because it would be immediately perceived in the large part of the media and the political opposition as a sellout to Russia. That makes them much more leery in the short term, at least of making any kind of concessions.

Fyodor Lukyanov, Research Director of the Valdai Discussion Club: There is no chance to find mutual understanding on missile defense systems now. Such attempts have been made in 2000s, but ended in nothing: the US eventually continued the policy that began in 2001, when they decided to withdraw from the ABM Treaty. Now this topic is very important, because it is part of the overall problem of strategic stability. The situation is quite dangerous, because it is not very clear how the model to which we must return looks, or create anew. There is no return to the ABM Treaty - we can say rhetorically that leaving this was a grandiose mistake, but to rewind the time back and return to 2001, or, especially, to 1972 is impossible. And today there are not only negotiations, but also there is no idea of ​​how and at what level to conduct them.

Dmitry Gorenburg: For Russia, anti-ballistic missile systems will always be seen as a threat just because they do not and cannot trust US assurances for the future because it is very difficult to make a binding agreement, and they realize this. Right now, the US says it is only about Iran and North Korea and they mean it and that is what it is about. But, if they develop it, some future leader ten or twenty years from now will be hard-pressed not to expand it if the technological capability is there.

That is the Russian perception, to my mind. Given that, it is very difficult not to see it as a threat unless you do what Russians have been advocating for a long time, which is make a joint system or US reveals how it works, something the US would never do, so from that perspective it becomes very difficult for Russia to accept it. There could be changes at the margin, but the overall perception that US missile defense, if it is developed, will eventually be a threat to Russia at the core, and I do not think this can change.

Fyodor Lukyanov:  At some point, when the US moved away from the Syrian issue for its internal reasons, the missile strike against the Syrian air base did not specify a vision of what America wants to achieve in Syria. Anyway, it showed that the US intends to play a role there. It is a demonstration that "without us you will not do anything". In any case, it was clear before. The participants in the Astana talks - Russia, Turkey and Iran - understood that it was impossible to achieve a political settlement without the US or bypassing the US: their ability to destroy any agreement is extensive. Now America has returned to the game table, but it is unclear what cards it has and whether it has these cards. There is a contradiction: on the one hand, America wants to play a role, on the other - it is not clear which one, and, most importantly, how it can be considered a priority for Washington. It seems that for Trump and part of his administration this is not a topic that they want to make the central one, but an excuse to show what exactly needs to be done to ensure that America must be respected. That America is not respected enough and it is necessary to be more severe, Trump said not only when Obama was president, but also thirty years ago. This is not a good background for negotiations, because there is no rational goal on the part of the United States. The only good news is that, apparently, there is no real intention from America to invade and overthrow the regime in Syria.

Richard Weitz, Senior Fellow and Director of the Center for Political-Military Analysis at Hudson Institute: Before the April 4 chemical weapons use, the Trump administration looked like it was going to accept the Assad government as the lesser evil, compared to the terrorist options, and that would let Russia deal with the Syrian question while the US focuses on Iraq, and that would make a logical division of labor. Now, because of the administration’s concerns about chemical weapons use it is complicated, but I still do not think the administration is opposed to Russian military presence, Russian-Syrian cooperation outside the area of chemical weapons use. The US would not be actively a partner, but it would not present a major impediment to Russian goals of establishing a stable situation in Syria. It would be good if there would be another leader rather than Assad because the administration in the US has made that an issue, but the Russian government says it is not going to overthrow Assad just to make the US happy. 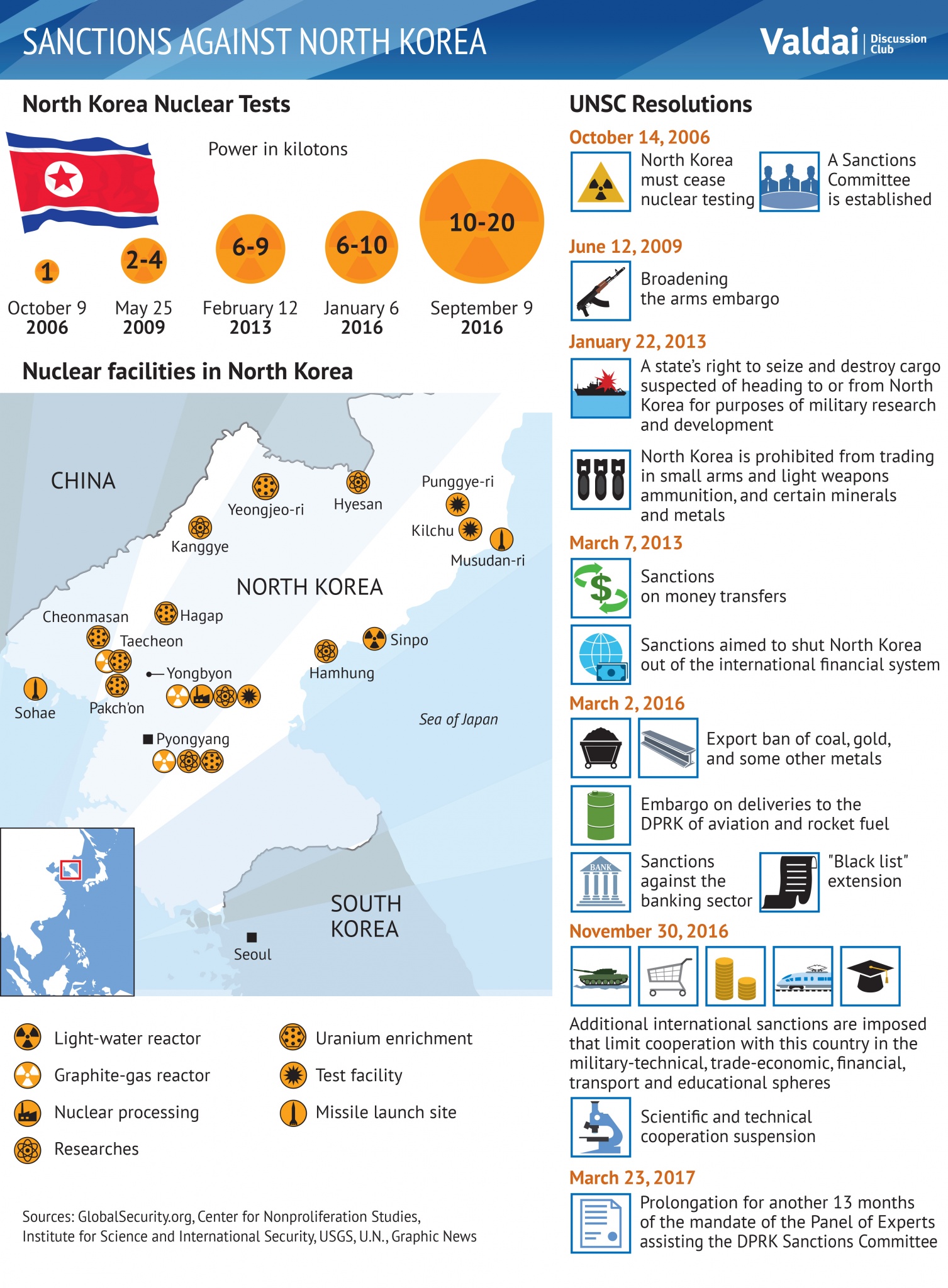 Dmitry Gorenburg: With the new administration, there is an effort on the American side to test Chinese resolve, the extent to which they support North Korea and to try to shape that relationship. The noise that is going on right now is mostly about that.

For Russia, not much has changed. For Russia, the main goal is to maintain stability. Their fear is regime collapse in North Korea followed by refugees, conflict, etc. So, whatever can be done to maintain that stability is where Russia wants to be. I do not think there has been much change there.

Fyodor Lukyanov: The fact that the North Korean regime is bluffing and provoking is not the news. This is their line of conduct for the last fifteen years, with different US presidents, and this is, in general, their habitual behavior. Another matter is that despite all this rhetoric, North Koreans are developing their nuclear missile program - albeit not as successfully as they would like - and thus they bring a certain moment of truth closer. But now another element has been added: the US administration became fully engaged in Pyongyang bluffing and external effects by sending aircraft carriers, threatening to solve the issue at any cost, etc. When one thing is combined with another, this creates a very nervous situation, which is particularly felt by China. Beijing dislikes it very much, it tries to maneuver, it does not want an open conflict with the US, but also it is not going to fulfill its demands for a blockade of the DPRK. Russia does not like this either, because all this happens near its borders. And the level of tension that we are seeing in East Asia is perhaps superior to that we were prepared for.

Richard Weitz: Russian and US interests coincide in both the long term and the short term. Long term, I think both countries would be happy seeing a unified Korea that would not have nuclear weapons or long-range ballistic missiles, that would provide a means for Russian energy and other transportation routes to expand into Asia-Pacific. In the short term, they clearly share an interest in averting major crises.

The Russia-China partnership could also be useful with respect to Korea, since it appears that the North Korean government is more open to dealing with Russia than with China and we know that president Putin has also had a long-term interest in the Korea question. When he first became president, he went to Pyongyang and tried to solve the missile issue by offering Korea access to the Russian space program. That was a good offer, it’s just that they turned it down. But since then he has been trying to get them to come to Moscow, for example to the Victory Day parade. He is clearly interested in this issue and Trump now considers this an important issue. So, I see that as an area that is still the best area for partnership between the two.