The IPEF needs to be a mutually beneficial and credible alternative to support  the regional initiatives and be perceived by partners as a viable framework and commitment to the region, writes Nivedita Das Kundu, Senior Researcher at York University, Academic Director at Liaison College. This article represents one of the opinions within the framework of the discussion among the experts of the Valdai Club on the topic “Asia-Pacific or Indo-Pacific?”

The Indo-Pacific Economic Framework (IPEF) is a collective economic framework to make the Indo-Pacific region an engine of global economic growth. This new initiative is one of the biggest recent moves made by the US in the region. The IPEF will engage Asia on economic matters for the first time since former US President Donald Trump withdrew from the Trans-Pacific Partnership (TPP) in 2017. The IPEF was launched in Tokyo on May 23, 2022. The IPEF is a unique trade and economic grouping, formulated jointly by 13 nations to provide an alternative economic solution to counter China’s geostrategic and economic manoeuvring in the Indo-Pacific region. This initiative was finalised before the fourth QUAD (Quadrilateral Security Dialogue) summit was held in Tokyo, on May 24, 2022. This is an interesting Quad-plus initiative, in strategic terms, which can be considered as a regional economic grouping with the countries being co-members in other groupings.

Global Corporations and Economy
India’s Growing Strategic and Economic Interests in the Quad
C. Raja Mohan
India’s new readiness to engage with the US and its two major Asian treaty allies, Australia and Japan, in the so-called Quadrilateral Security Framework is widely viewed as a major departure from its traditional policy of non-alignment. But a closer look suggests that Delhi did experiment with close alignments in the past, when its core national interests faced serious threats.
Expert Opinions 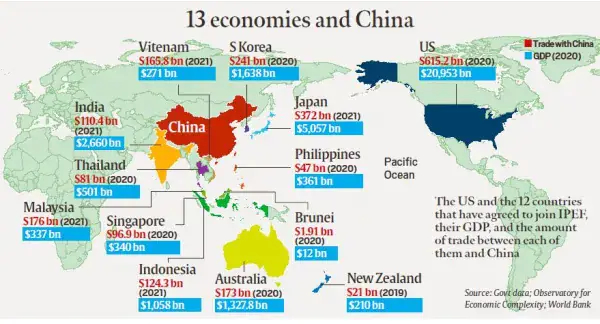 USA+ 12 more countries that have decided to join IPEF, their GDP and the level of trade of each of them with China

IPEF Member Countries in the Region

The IPEF includes seven of the 10 ASEAN (Association for Southeast Asian Nations) countries, the four QUAD countries (India, US, Japan, Australia), as well as New Zealand, Fiji and South Korea. All 14 countries (the United States, Australia, Brunei, Fiji, India, Indonesia, Japan, South Korea, Malaysia, New Zealand, Philippines, Singapore, Thailand and Vietnam) are East Asia Summit members and all are part of the Regional Comprehensive Economic Partnership (RCEP), except India, Fiji and the US. Canada has shown an interest in IPEF membership to counter China's growing clout in the region and initiate further economic cooperation in the Indo-Pacific region. In the coming months, the IPEF members will consider including new members and Canada will be given preference. 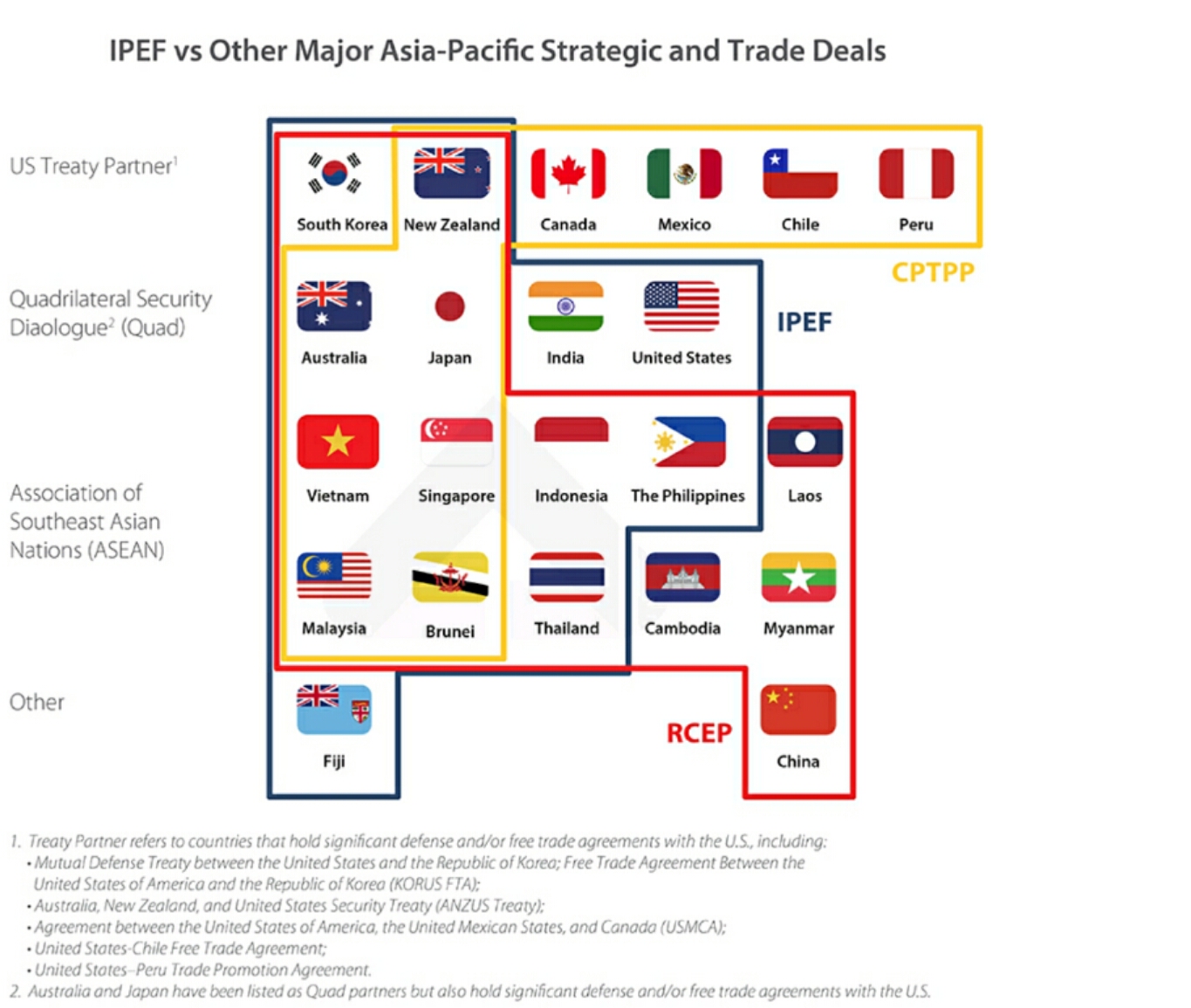 The four policy pillars of the IPEF includes digital trade, building of resilient supply chains, fulfilment of clean energy commitments and implementation of fair trade rules with effective taxation and elimination of corruption. The IPEF initiative will present the Indo-Pacific countries an alternative to China’s aggressive strategy on trade in the region and strengthen political and economic ties with partner nations. The IPEF wants to understand and assess today's China and find common and creative solutions to tackle economic challenges of the Indo-Pacific region. China has responded strongly to this initiative mentioning this move as an initiator for regional divisions. Chinese analysis of IPEF is that this economic grouping is unlikely to affect Chinese economic interests. China’s policy experts argued that China is better integrated with the region than the US. Highlighting existing China-led RCEP and BRI (Belt and Road Initiative) programs. As per Chinese policy makers, many South East Asian industries are dependent on China for raw materials and these are processed for export to the US or European Union (EU). Besides trade with RCEP countries, China’s trade with ASEAN bloc totalled US$ 212 billion in the first quarter of 2022. Though China views IPEF as an effort to undermine the unity of ASEAN and include them in the US-Indo-Pacific strategy. China believes that the IPEF will not be able to decouple the ASEAN countries because of the overwhelming nature of China’s engagement with them.

As per Chinese policy analysts, China cannot be ignored due to its regional influence. Today, China is the largest trading partner of most of the countries in the region and those trying to isolate China will eventually isolate themselves. A section of the Chinese strategic community argued that it will be impossible to exclude China economically since it is the largest economy in terms of purchasing power parity and the largest trading nation with most of the Asia-Pacific countries. However, all the IPEF members believe that by deepening economic engagement among partners will help in continued growth, peace, and prosperity in the region. The IPEF nations can work towards advancing regional economic connectivity, integration and boosting trade and investment within the region.

Eurasia and Asia
India's Foreign Policy Dilemmas: Protecting National Interests
Alexei Kupriyanov
The events of recent years, and especially this year have taken India out of its comfort zone, writes Valdai Club expert Alexey Kupriyanov. India felt quite comfortable in the previous reality; the new one puts it before a large number of challenges, which the Indian leadership has so far successfully overcome, once again demonstrating an exceptional ability not to quarrel with anyone more than necessary and to extract maximum profit from the conflicts between other great powers.
Expert Opinions

The unprecedented Covid-19, the pandemic has impacted the global economy affecting manufacturing, supply chain and the movement of people and goods. Thus, pandemic  emphasized the importance of strengthening economic competitiveness and cooperation for securing the critical supply chains, while stimulating job growth and improving economic opportunities. The focus on resilient supply chains is an effort to protect the region from disruptions and inflationary pressures. Through this initiative, the partner countries would be able to cooperate with each other and bring stability, prosperity, development, and peace within the region.


The countries of IPEF share a commitment to a free, open, fair, inclusive, inter-connected, resilient, secure, and affluent Indo-Pacific region. It has the potential to achieve continuous and wide-ranging economic growth. The economic policy interests in the region are intertwined and deep economic engagement among partners are crucial for continued growth, peace, prosperity and regional development. This framework will help lower costs by making the supply chains more resilient in the long term. The IPEF is expected to maintain high standard rules for competition, rather than dominate by any particular country. The IPEF proposes a framework that will benefit labour, entrepreneurs, and consumers. The IPEF represents an opportunity to enhance Indo-Pacific nations  economic and trade growth and enhance grip in the region. The IPEF needs to be a mutually beneficial and credible alternative to support  the regional initiatives and be perceived by partners as a viable framework and commitment to the region.

Economic Statecraft
Asia Pacific or ‘Indo-Pacific’
Shahida Wizarat
Countries which are adversely affected by the ‘Indo-Pacific’ construct like China, Russia, Pakistan, Iran and the Central Asian Republics, through strengthening their own strategic integration, can offset the negative impacts of the ‘Indo-Pacific’ project, writes Shahida Wizarat, Dean of the College of Economics And Social Development, Institute of Business Management (Pakistan). This article represents one of the opinions within the framework of the discussion among the experts of the Valdai Club on the topic “Asia-Pacific or Indo-Pacific?”
Expert Opinions

Fact Sheet: In Asia, President Biden and a Dozen Indo-Pacific Partners Launch the Indo-Pacific Economic Framework for Prosperity”, The White House, 23 May 2022.

“China Goes on Offensive against IPEF, Projects it as ‘Economic NATO’ to Blunt its Dominance”, The Print, 24 May 2022;

“Wang Yi Attends and Addresses the Opening Ceremony of the 78th Session of the UN Economic and Social Commission for Asia and the Pacific”, Ministry of Foreign Affairs of the People’s Republic of China, 23 May 2022.

See Kai He, “US’ Indo-Pacific Economic Bloc Irks China but It May Not be All Bad for the Region”, South China Morning Post, 3 June 2022.

Concerning Valdai Club’s Activities on Social Media and Online Video Platforms
Motives of the Anti-Russian Coalition: Are There Cracks in the Monolith?

The Russian Predicament
China and Europe: What Was It? The Rise and Crumbling of the ‘16+1’ Format