Biarritz was, if we must believe the French media, the centre of the world, on the occasion of the G7 summit this weekend (24th – 26th August). It was a summit that was dedicated, officially, to fighting inequality, but one where contentious topics were discussed: the GAFA tax, which had the unusual effect of uniting the French and the British against the Americans, the environment, the trade dispute between the United States and China, and the question of Iran, regarding which the US decision to withdraw from the JCPOA agreement has been widely criticised among European countries.

But this G7 summit, despite communications operations – like the arrival, presented as a “surprise,” by the Iranian Foreign Minister – could well turn out to be a failure. The member countries have taken action so that national policies and bilateral relations now outweigh multilateralism. In addition, it should be added that we are no longer where we found ourselves during the 1980s or 1990s. The G7, which claims to be the “club” of the richest and most powerful countries, has today been overtaken by the BRICS. In fact, it is the G20 that is increasingly emerging as the legitimate institution for dealing with the interweaving of economic, financial and strategic affairs.

The G7, official and unofficial agenda

Officially, therefore, the expected decisions concerned the reduction of inequality, an important topic in a world torn apart by inequalities. However, it is a subject on which we can expect a lot of beautiful words and very little concrete action. The issue of the environment has taken some urgency because of the devastating forest fires ravaging the Amazon. This is obviously an important question, but also an issue where there is a lot of hypocrisy. This is because the Amazon isn’t just burning in Brazil (fires have also ravaged Bolivia, Paraguay and other countries), and also because the Amazon is not the only major forest to burn: forest fires that today rage in Africa are equally important, but no one speaks of it. Similarly, this summer’s fires, which are certainly disastrous, are only slightly more numerous than those of 2016: 75,336 fires versus 69,310.  It is true that the problem of deforestation, induced by the pressure of livestock and the cultivation of soybeans, is a major issue today in the Amazon. But it was, perhaps, an even more pressing problem twenty years ago. 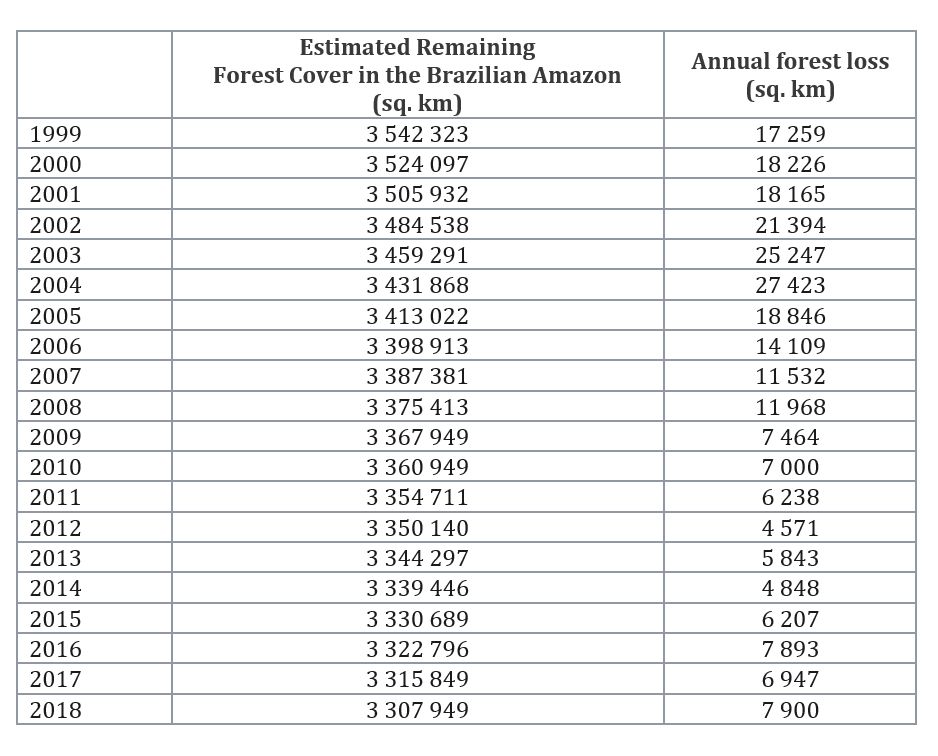 The issue of trade negotiations and the role of multilateralism were also discussed. The United States and other countries differ on this point in important ways. We can also note that some issues which were not explicitly on the agenda were addressed: the instrumentalisation of trade in dollars for political purposes by the United States is a major problem, as well as the growing risks of recession and global crisis. The United States has clearly expressed dissatisfaction with multilateral negotiations. The countries of the European Union are, rightly or wrongly, more attached to it. The membership of the United States in the WTO has therefore been called into question; it is indeed a central issue. If the US government were to decide to walk out of the WTO, it would probably sound the death toll for the organisation.

The question of Iran was also raised at the summit. The European countries have denounced the US decision to walk away from the agreement with Iran on nuclear weapons and technology. They have also denounced the US sanctions policy, which is hurting the European countries much more than Iran. The arrival of the Iranian Foreign Minister testifies to Emmanuel Macron’s willingness to restart negotiations at this point.

G7 Summit in Biarritz: Who Will Sigh with Relief?
With such unpredictable characters as Boris Johnson and Donald Trump attending, drama within the meeting halls cannot be ruled out. In the event that all passes off quietly and according to plan, it will not only be President Macron who will sigh with relief.
Mary Dejevsky
G7 Summit: Macron’s Urbi et Orbi Message
Evgenia Obichkina
The G7 is not an indispensable body. It’s just another “time check”, a comparison of agendas so that the nations may convince each other that the ways to overcome all the challenges and threats that each of the parties offers are the most promising.
Expert Opinions

The challenges of this summit

Emmanuel Macron, who happens to be the President of the G7 this year, was playing a high-stakes game with this meeting. A clear failure, as in 2018 in Canada, would have lastingly compromised his claims to present himself as a great negotiator. He is also aware that the influence of the G7 has greatly diminished over the last ten years. The G7 is the distant heir of the G5, which was formed to try to coordinate the monetary policies of the major Western powers following the dissolution in 1973 of the Bretton Woods agreements. Originally, the G7 was the brainchild of French President Giscard d’Estaing (1974-1981). The G7 has been tasked with coordinating currency movements as exchange rates have become flexible. Called first informally the G5, then provisionally the G6 when it was formally established in 1975, and later the G7 with Canada’s integration in 1976, its influence soon spread to other aspects of the economy, beyond mere monetary policy problems. The G7 nations still had, at the end of the twentieth century, a dominant role in the world economy. This is no longer the case today. The process of the emergence of new economies has clearly changed the whole ball game. The expulsion of Russia from the G8 in 2014, an expulsion that is now regretted by both the Japanese and Italian leaders as well as Donald Trump, has certainly hastened its decline. Moreover, if we calculate in purchasing power parity terms, the G7’s share of global GDP is today lower than that of the BRICS, a forum which brings together five emerging market countries. 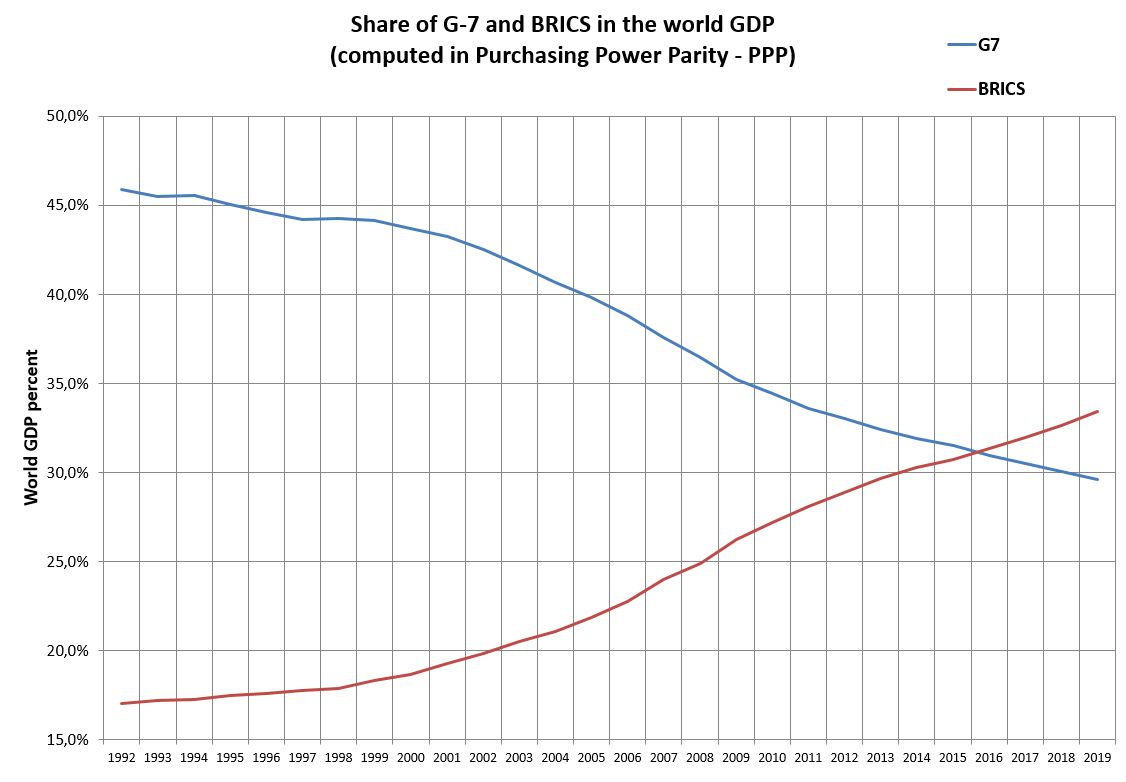 It is obvious that Emmanuel Macron’s proposal to invite other countries, such as Australia, India, South Africa and Chile, is a recognition of this state of affairs. However, it must be noted here that China and Russia were not invited, despite the major role they play. The invitations that were made were therefore intended to mask the G7’s loss of influence and prestige in comparison with the G20.

It is clear today that any closed club of rich countries no longer has any legitimacy making decisions on behalf of the emerging market countries or even just proposing them. The United States, for its part, has understood that it would like to re-invite Russia to participate in the G7, according to a statement mirroring one made by the Japanese prime minister. But it is unlikely that Russia would really be moved by such a proposal. It knows full well that the G7 is an institution that is nearing the end of its life. The G7 is thus being overtaken by the BRICS not only in terms of its percentage of world PPP-adjusted GDP, but also in terms of the proportion of investment being made worldwide. 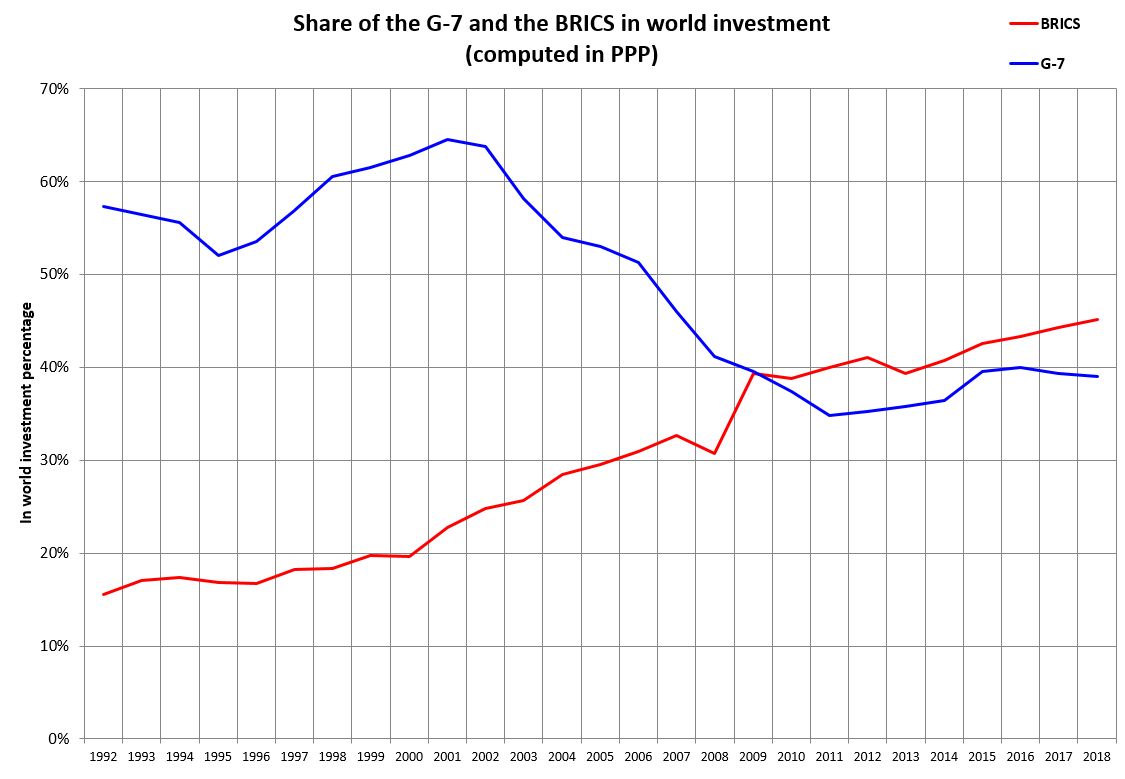 In fact, a comparison of the G20 with the G7 shows that the first group has taken precedence over the second. It is the G20 that has become the global forum that really counts. And this is true when you compare the weight of the G7 with that of the G20. 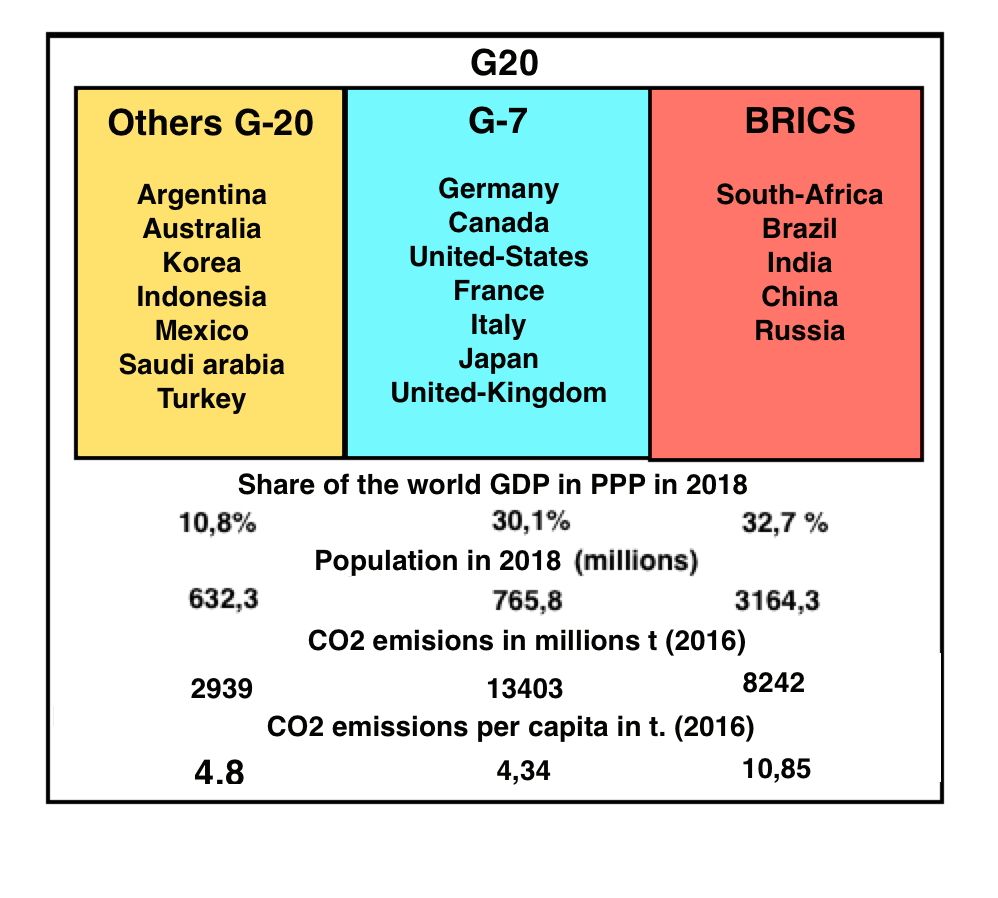 The G20 currently accounts for 73.6% of global GDP. The group is comprised of the G7 nations, the European Union, the BRICS and six other countries. It is this set of countries (along with the EU) that is most economically relevant.

What are final results of this summit?

The record that we can draw today from this summit is very mixed. Clearly, we have not gone beyond rhetoric in addressing the question of inequality or the environmental emergency. It could not have been otherwise, given the significant differences among the G7 countries.

The trade dispute between China and the United States, meanwhile, is more beautiful. On Friday, August 23rd, China re-launched the escalation of the trade war, with further tariff increases on products imported from the United States. The US administration immediately responded by increasing duties on products imported from China. All this has been observed, by the European G7 countries, which have not reacted. Germany, in particular, fears being dragged into this trade war, as its economy is on the verge of a recession. Regarding the GAFA tax, which both the French and British governments are pushing for, an agreement could possibly be reached, but at the probable price of making a mockery of the very idea of taxing Internet giants.

With respect to the Iranian issue, it is clear that the discussions will continue. Both the United States and Iran want to find a way out of the current crisis. It is perhaps on this issue that progress is possible.

However, this summit has rammed home an important lesson. So we are witnessing the end of the Westernisation of the world, a process that took place between the late eighteenth century and the end of the twentieth century. We must make note of this. It is why Russia does not particularly want to return to the G7, even though it has been pleased to hear Donald Trump’s statements about its possible return. The centre of gravity of the global economy is indeed no longer the Atlantic Ocean. It has moved to Asia with the rise of China, the world’s second largest economy (and even first if we calculate in Purchasing Power Parity terms) and a direct interlocutor of the United States. And this is not to mention India, which is also gaining strength and is now in 5th place, ahead of France. This is why the meeting of the G7 in Biarritz was no longer able to decide for the world, whatever the major French media and its journalists think.

The G7 countries, since the summit held in Canada in 2018, have measured what it would be like to show off their differences. At the same time, never have the latter been so important, and above all, seemed irremediable and irreconcilable. So, we cannot exclude the notion that the group is witnessing open failure. However, it is more likely that diplomats will find some beautiful hollow formulas that proclaim that the “club” still works even though it is patently acknowledged that the group is paralyzed and, above all, that it no longer has the importance it had 20 years ago.